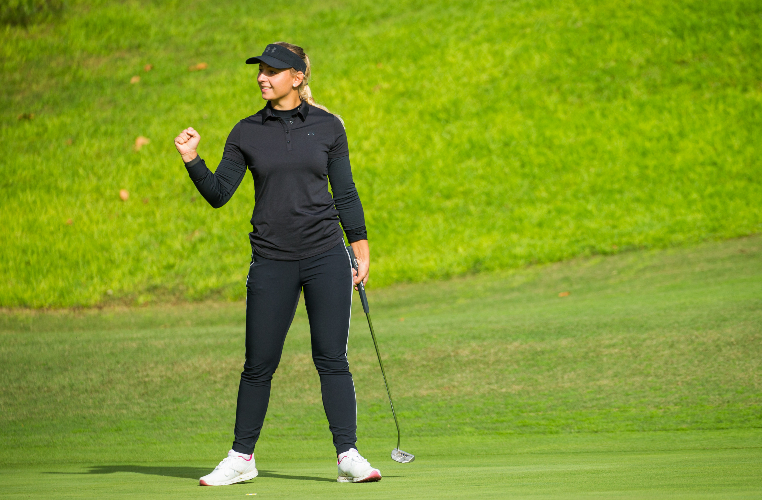 Finishing the year with more than triple the points of her nearest challenger Julia Engstrom in second place, as well as pocketing €415,000 in prize money, the 24-year-old has been in unstoppable form all year, recording a remarkable five wins, a further three top ten finishes and a career-best major showing at the AIG Women’s Open (11th) from 12 starts.

Following in the footsteps of an illustrious list of winners including Dame Laura Davies, Suzann Petersen, Annika Sorenstam and Georgia Hall, Pedersen becomes only the second Danish golfer to top the money list on any major international tour, following six-time LET winner Iben Tinning, who won the Order of Merit back in 2005. As a result of the accolade, Pedersen also collects a €20,000 bonus pool check.

“I can’t believe I’ve won the Race to Costa del Sol, it’s always been a dream of mine and I am so happy to not only be playing well this year but to win a few trophies too. There were times when I thought that I wouldn’t get back to my best but working with my team we have focused really hard on not just reaching the same level of where I was but going past it. The last few months have been amazing.”

After a slow start to the year in Australia, Pedersen recorded her first top-ten at the Investec South African Women’s Open in March before a temporary halt to the schedule, due to COVID-19 restrictions.

Picking up where she left off in her quest for Costa del Sol gold, the fiery Dane recorded a runner-up finish at the first tournament back after the restart in August at the co-sanctioned Aberdeen Standard Investments Ladies Scottish Open before adding an 11th place finish at the AIG Women’s Open.

Having already hit the summit of the race, Pedersen started to pull away from her nearest challengers as early as the Tipsport Czech Ladies Open, where a closing eagle sealed a four-shot win and a first LET title since 2015.

Threatening to win again the following week in Switzerland, Pedersen’s third place finish laid the foundations for what would prove to be an eventful November – where she went on to make history in Saudi Arabia with a hat-trick of victories at the Aramco Saudi Ladies International Presented by Public Investment Fund and the Saudi Ladies Team International (Individual & Team).

A fourth trophy and a third individual title in three weeks followed yesterday, with a four-shot victory at the season-ending Andalucia Costa Del Sol Open De Espana to solidify her place at the top as LET No. 1.

Coming back from as low as 509 in the Rolex Rankings at the start of the year, Pedersen’s latest triumphs and consistent performances have catapulted her into the top 100 of the Rolex Rankings  for the first time in her career and she has her sights set on Solheim Cup redemption in 2021.

“I’m proud to be flying the flag for Danish golf and I’ve had so many nice messages from not just players on the LET but the men’s European Tour too. I enjoyed myself on the golf course this year and winning the Race to Costa del Sol will give me lots of confidence for 2021 as I set my sights on being part of Team Europe for the Solheim Cup and maybe even the Olympics.”

The President of the Costa del Sol Tourist Board, Francisco Salado, congratulated Emily Kristine Pedersen on her triumph as the winner of Race to Costa del Sol, the culmination of the Ladies European Tour annual calendar. He stated “this partnership with the LET, and the involvement of the destination in the different international events of the order of merit of the Ladies European Tour is extremely rewarding. It is also a clear indication of our support of women’s golf, both at a professional, and amateur level. The Race to Costa del Sol guarantees extensive television and media coverage in markets of particular interest to our destination, which have a high percentage of women golfers, such as Germany, Switzerland, France, U.S.A., Canada, Asia.”

“The Costa del Sol Tourist Board has, for many years, promoted the Costa del Golf as the ideal golfing destination and we shall continue to do so. Together with the golf industry, we provide personalised service, carefully adapted to each visitor’s needs, ensuring the perfect holiday experience, at any time of the year.”

In addition, the president declared that “the Costa del Sol has no doubt that the promotion of women’s golf is especially important, given that it is often the lady golfer who spends more in destination, appreciating, and enjoying to the full, all the different attractions that Costa del Sol provides.”

Alexandra Armas, Ladies European Tour, CEO, said: “Emily is a deserving winning of the inaugural Race to Costa del Sol title and we are delighted to present the award to her. She has performed consistently well all year and this title is further reward for all the hard work she has put in to become a champion.  I would like to thank the Costa del Sol Tourist Board for their unwavering support in a difficult year for golf and we are looking forward to the 2021 season already.”

For more news and information on the Race to Costa del Sol, check out the full final rankings HERE