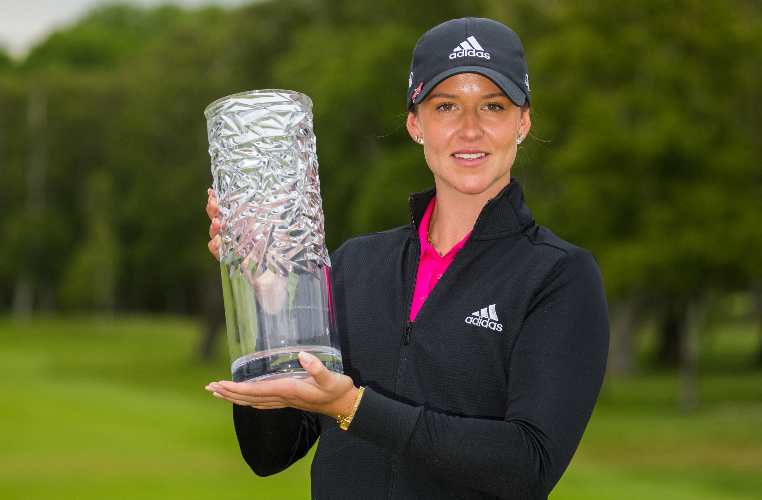 In this week’s Player Blog presented by Enterprise Rent-A-Car, Linn Grant talks about her pride at breaking boundaries, her long-time friendship and 2022 rivalry with Maja Stark, her love of horses and taking Augusta National in her stride.

I am very proud to be the first female winner on the DP World Tour. It’s still quite strange to say, some people come up and say it’s history making and it’s quite strange but I’m very proud of it. I hope I made a statement because I think that there are a lot of younger women coming from college and amateur golf that are really good. I’m here a bit early but there a bunch of us coming and I just hope that people will open their eyes a bit more to women’s golf.

I really enjoyed playing with the guys at the 2021 Scandinavian Mixed. Growing up I always played with the guys at my club and playing that week in the mixed groups with the pros playing for the same purse, I thought that was really fun. I enjoyed coming back in 2022 and I think that’s one of the reasons I played really well. I enjoyed the format and being there with both men and women.

I remember in 2022 someone told me I was top-ranked for the event and I was just thought ‘what, are you kidding me? There are so many good players here’. That didn’t seem right but I enjoy Halmstad very much and I love playing at home. Playing the first day with Annika Sorenstam was more nerve-wracking than going into Sunday with the lead. I was at home and there was a lot of people watching that I knew so the first day was the worst. Going out on the last day was actually manegable and I could work with that sort of nervousness. I remember expecting someone to come back at me so I had to shoot a good score to keep that lead. Making those birdies from the start helped me relax.

My goal has always been to be one of the top players in the world and one of the players that all the other players want to beat. I’ve put the Solheim Cup away a little bit because it’s not until next year but obviously that is one of my goals as well.

My grandfather was a golfer but he passed away when I was six so he was never a part of my golf at all which is a bit sad. My dad played college golf and tried to turn pro but then started a family with my mum so he quit for a couple of years. Then around turning 40 he started again and brought me out onto the golf course. I wasn’t forced to go but I was a little bit! I just went to eat ice cream and go in the buggy but I liked it and made some friends. I started playing camps and little tournaments in my summer break and that was how it started.

I was part of the amateur teams that won the European Girls’ Championship in 2017 and European Ladies’ Championship from 2018 to 2020 and our recipe for success was being in a team where the level of golf is so high and we’re always pushing each other to become better. We never saw each other as opponents, we were always team-mates. Even when we played individual tournaments we always cheered each other on and practised together and tried to improve with each other’s help. I think a lot of that was very helpful to all of us in those years, we weren’t in a team where it was a constant competition of who was going to be in the team. That was a big part of the evolution of my game, being part of a team that pushed each other to be better and with a coach and a federation behind us that supported it. We had an amazing coach in Fredrik Wetterstrand – he is something totally different. He sees the game from a totally different perspective and he coached us very well.

Maja Stark and I were on some of those teams and we’re still close. We stay together at some events and we have the same management team so we see each other a bit more than I thought we would which is very nice. It’s very nice to still have someone that knows where you’re coming from and I’m glad I have her as a constant competitive team-mate. Every week I look at the leaderboard and I’m happy for her but I’m also happy if I beat her every week and I think she thinks exactly the same.

I want to beat Maja and win the Race to Costa del Sol. My goal for the year was to be Top 50 in the world at the end of the year and I’m just outside of that at the moment so that remains a goal and some more wins would be nice. It’s my first year so it’s a lot of firsts to figure out a schedule and what I like.

Playing against pros on the Nordic Golf Tour when I was away from college helped me learn not only how to win but to be in contention. It prepared me for my next spring season. I had a lot of moments that summer where I needed to play well to either win or finish well or I was in a position where people were chasing me and I got more comfortable being in those situations.

As an amateur I looked forward to turning pro but at the same time it felt very scary. There have been so many people who have been good as amateurs and it just doesn’t click with them and I had that in the back of my head: what if I turn pro and it just doesn’t feel the same and I can’t play the same sort of golf? So playing two early professional events on the LET in Sweden and having Maja and my family there helped me really get the feeling that I didn’t have to do anything different. I just had to play my game and that was enough to come second those two weeks.

There’s always been a part of me that needs to prove myself to myself. I wouldn’t have won six events in the last year if I didn’t think that I could. I’ve always had in the back of my mind that my game was good enough, it was just a matter of being comfortable.

I’m not a golf fan, I don’t watch a lot of golf, so going to Augusta for the 2019 Augusta National Women’s Amateur I didn’t know every hole. Some people who I played the practice round with who knew the greens and where you shouldn’t be but I had no clue. I took it in but in a different way. It’s one of those places where the grass doesn’t grow the wrong way. I remember playing it the first year and thinking it was just a golf course but the second time I enjoyed it more because my expectations were too high the first time.

I’m excited about this week. I played the two courses today and yesterday and I think there’s lot of birdies to be made and we need that in a mixed event with low scores on both sides. I’ve played in Northern Ireland before at Royal County Down but that’s a different type of golf course. I never rate my golf game until a Thursday. It’s always a bit of a mess before we start but it feels alright. I’m confident that both of the courses will suit me quite well.

I have a lot of goals outside of golf when golf is done with. I don’t think I would like to be a teaching pro, I’m not into golf in that way. Whatever I do I just know that I really enjoy my life outside of golf and to be close to my family. I’ve always been a horse person, I love horses. Whenever I get the chance I try to surround myself with people that have horses. So my dream is to have a little stable and whenever that time comes, that is what I’m going to have. Whenever I play well in a tournament I feel I’m a step closer to that.