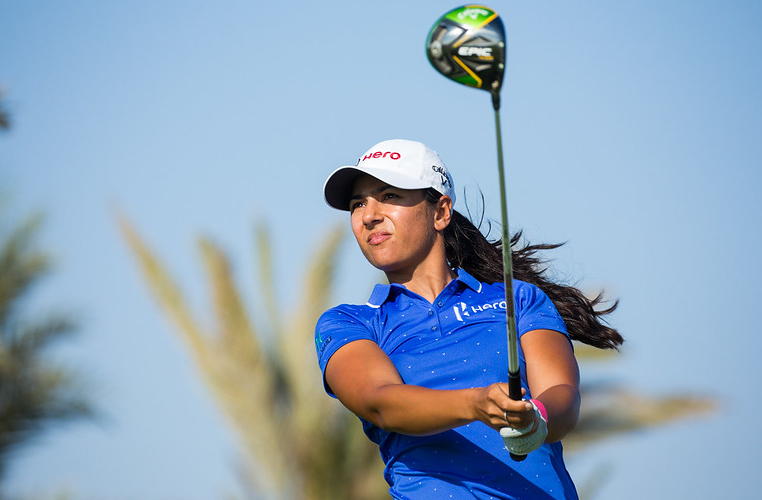 Tvesa Malik from India is living the life she always dreamt of – playing golf and travelling the world. This week she drove from the Ladies European Tour event in Italy to the next one in France, and two weeks before that she was in South Africa after practising for a while in Dubai.

Tvesa started 2021 well with a T-23 finish in South Africa and T-10 in Italy, where she was in contention early into the third and final round and even shared the lead for a brief while. “This year I want to play as many events as I can get into and I am growing and learning each week,” says Tvesa, who interestingly had a leading Indian pro, Ajeetesh Sandhu, on the bag. Sandhu was in Europe and did not get into the European Tour event himself,  so helped out Tvesa.

Travelling is nothing new to Tvesa. As a kid, she travelled as she grew up and went to school in different cities, and even countries. Her father, Aloke, travelled a lot for his work, with his wife Ritu. The travelling clearly seems to have rubbed off on the daughters, too.

It is quite possible that Aloke and Ritu even named their daughters, Tvesa and Kasvi, as a result of their travels. While Kasvi means ‘Shining’ in Hindi, it also means ‘popular’ in Russian; and Tvesa means ‘Luck’ in Hindi, and it means brilliant in Russian. Aloke was once posted in Russia, too!

Tvesa is now a globe-trotter as professional golf takes her to different places. “The last year has made me mentally stronger. I chose to play pro golf and I am ready to take the (Covid) tests and precautions that are needed for it in the current situation,” said Tvesa. Last year she went out to Europe and the Middle-East for a few events on the Ladies European Tour and now she is back on the road, as she moved from India to the Middle-East to South Africa to Italy and this week she will be in France.

Tvesa began taking an interest in golf when she was about eight and playing with her elder sister, Kasvi. Many felt Kasvi had tremendous potential, too, but she went on to pursue a corporate job that has taken her to South East Asia, including the Philippines and Singapore.

Meanwhile, Tvesa, who, along with Kasvi collected a bunch of amateur trophies and honours, became more serious with golf. After spending time in Kolkata, the family moved to Bangalore and is now based in Gurugram.

In Kolkata she often played at the Royal Calcutta Golf Club where the former well-known pro and now golf promoter and coach, Brandon de Souza, first saw her around 2006. “Her Dad, who was in ITC, was a friend, and I saw both sisters play and they seemed to love it. Kasvi was a bit older, so a bit better at that stage,” recalls Brandon De Souza, who says he is a mentor to Tvesa.

Once she started playing, golf started growing on Tvesa. Her father and her grandfather were keen golfers.  In time she kept going up the ladder on the Indian Golf Union amateur circuit and  successes piled up.

Back in 2007 when she was in Bengaluru, Shalini Malik, a former pro and now a referee, suggested that Tvesa come to Delhi to volunteer for the Women’s Indian Open. Tvesa agreed and her memories include the golf balls she collected as a volunteer. It added to her interest in the game.

When she came to Gurugram, she joined Scottish High School, which interestingly still has a golf programme for beginners under Karan Bindra and Anitya Chand of the DLF Golf and Country Club. Tvesa, who later did her graduation from Delhi’s Jesus and Mary College, trained with Anitya for around three years between 2016-2018 and that coincided with her growth in amateur golf. Interestingly Tvesa’s first win in a pro event came on the domestic Hero Women’s Pro Golf Tour in 2015, while still being an amateur.

She became one of the leading Indian amateurs. She represented India at the World Amateur Team Championship for 2016 Espirito Santo Trophy. Tvesa’s teammates at the event were Diksha Dagar and Gaurika Bishnoi, both of whom are also professionals now. Tvesa and Diksha also share a sponsor in Hero MotoCorp and play together on the European Tour.

Two years after winning a pro event as an amateur, Tvesa turned pro in 2017. She won twice and finished joint third on the Order of Merit. A year later in 2018 she won four times on the Hero Womens Indian Tour and topped the Order of Merit. By 2019 she had started looking at the Ladies European Tour, but still won twice in seven starts in India.

A T-13th place at the LET-sanctioned 2018 Hero Women’s Indian Open made her the top Indian in the event, but it was in 2019 that she started playing regularly on the LET. In 2019, she made just three cuts in the first seven events, but made the cut in all five events from September to December. That included her first career Top-10 on LET, at T-6 at the Hero Women’s Indian Open.

The following year, 2020, was a truncated one due to the pandemic. Tvesa managed three starts, two in Australia and one in South Africa, before she was grounded at home for over five months due to Covid.

The moment events began, she found her way to Europe and started playing and played nine events on LET, including her first Major, the AIG Women’s Open, and two more on LET Access (LETAS) Tour. She had a Top-10 in France and a Top-5 in LETAS in Switzerland.

“Playing in Europe and managing myself through all that and the tests and travel was a big experience,” recalled Tvesa then. “My game was improving and getting better and the things I had worked on showed results.”

Brandon, who Tvesa says has been a big help over the last few years, is happy with the way she is progressing.

“Tvesa has built a fine team around her. She has people for nutrition, physical fitness, mental training and I help in golf. She is working at it 360 degrees and that is beginning to show in the way she prepares. She also has good sponsors like Hero MotoCorp, without doubt the biggest supporters of the game in India. Other sponsors include Halmari Tea and Kakinada Sea Ports,

Callaway and DLF Golf have been great for her plus there is great support from her family, parents Aloke, Ritu and sister Kasvi,” says Brandon.

He added, “She is maturing fast. For instance, she finds everything she can about weather and the course before landing. She knew it would be windy in South Africa and this week she knows it will rain in France.”

“I obviously want to break through on the LET and then move forward,” says Tvesa.

Brandon adds to that, “The final goal is to get to the LPGA and do well. Then who knows?”

V Krishnaswamy is India’s leading Golf writer; founder of the website www.GolfXYZ.in and reports from all over the world on Indian golf.