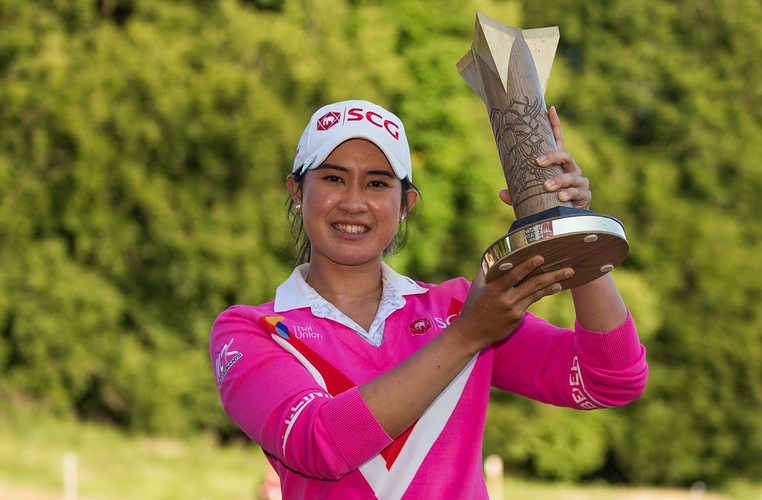 On the last day, which was held at Galgorm, Anannarukarn and American Emma Talley finished the tournament on 16-under-par.

The duo headed back down to the 18th tee but couldn’t be separated and it took another trip up 18 for Anannarukarn to come out on top.

“I’m honestly just speechless. I really wanted to thank everyone along the way, those who believed in me from the very beginning. I wouldn’t be and wouldn’t have come this far without them. It was really nice to have my friends here. It is always great to see them, especially such a special memory,” said the 22-year-old.

The Thai star began her round with birdies on the first, third and fourth holes but picked up a triple bogey on the seventh.

Anannarukarn made further birdies on eight, nine and 13 before dropping a shot on 16 and rolling in another birdie on 17 for a round of 70 (-3).

She added: “It was a really tough pin position on 18, and I had a long distance going into the green on the third shot on the first playoff hole. I’m actually really glad that I hit the green on that one but left myself about like a 60-feet putt. I’m really happy that I made that two-putt. On the second playoff, it went even longer than I expected. I just wished I could give myself a shorter birdie putt, but then it happened.”

Talley had an excellent opening nine holes with five birdies and one bogey, while on the back nine she added three bogeys and two birdies for a round of 70.

Despite losing out in the playoff to Anannarukarn, the American was pleased with the experience and her second place.

“It was a good day. Unfortunately, I didn’t get it done but I wrote in my yardage book last night ‘Thank God for this opportunity and the experience no matter what happens’. That is truly how I feel. I lost my game for two years, so this confidence I can just build on and learn from it and keep going. I’m excited,” said Talley.

American Jennifer Kupcho finished in third place on 15-under-par after shotting a round of 71 on the final day.

“It is still a good week for me to finish fourth. It means a lot to me to finish this well. This is my first full year as a professional and then playing last week in a Major and finishing top five, and then having another top five this week,” said the 18-year-old.

In the 2021 Race to Costa del Sol, Thitikul stretched her advantage at the top of the standings and now has 1,693.25 points.

Finland’s Sanna Nuutinen remains in second place with 1,016.42 points, while Australia’s Stephanie Kyriacou is in third place with 984.36 points.

In the men’s competition, England’s Daniel Gavins claimed a one-shot victory after firing a round of 65 on the final day.