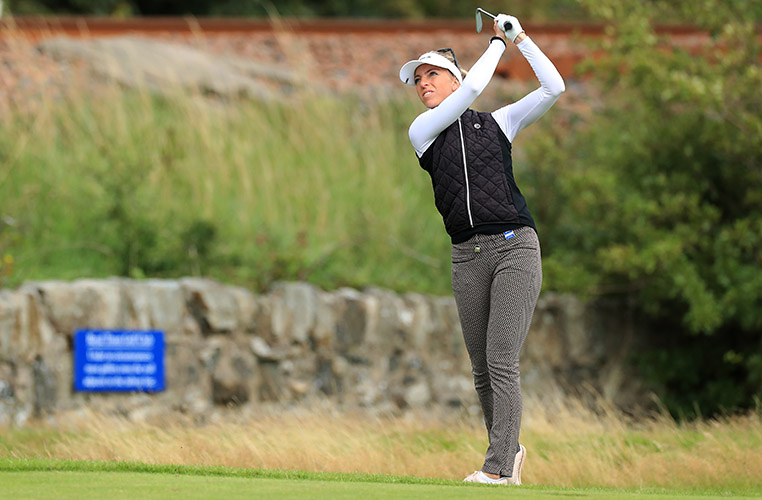 Germany’s Sophia Popov produced a flawless bogey-free third round of 67 (-4) to take a three-shot lead at four-under-par from Thailand’s Jasmine Suwannapura and Australia’s Minjee Lee at the 2020 AIG Women’s Open at Royal Troon.

Playing in only her second AIG Women’s Open, the world no. 304 looked calm and composed as she posted the joint-lowest ‘round of the week’ to pull clear of the chasing pack.

Coming off a second-place finish last week on the Symetra Tour, the American-born German currently has no status on the LPGA or LET and qualified for the first major of the year at the Marathon LPGA Classic two weeks ago.

Speaking about her expectations, Popov said, “Last week, although my golf game I knew was in a good spot. I said, you never know, maybe I can get myself in contention next week. Even though I was joking about it, I knew I’m capable of it. I think the expectation in my head has always been there. It’s just whether I can make it happen, so it’s really nice to see that I can.”

Looking confident throughout the round, the 28-year old took control as early as the par five 4th hole and never looked back, as she played one of the shots of the tournament – a driver off the deck from 260 yards to 10ft to set up an eagle.

Sleeping on her first major lead, Popov said, “There are going to be a lot of nerves and I’d be lying if it wasn’t that way. That’s why we play sport. We do this in order to be in a position like I’m going to be in tomorrow.”

With more favourable scoring conditions on the Ayrshire coastline for much of the day, and a reversal in wind direction which meant that the front nine played easier, as many as 23 players shot par or better in comparison to 26 across the first two days.

Rolex Ranked No. 8 Minjee Lee is lurking close behind in T2 after a round of 69 (2). The Australian has been playing consistently all week and went as many as 29 holes without a bogey before making a five on the par four 12th hole.

Flying under the radar is Four-time Solheim Cup player Caroline Masson, who jumped 13 spots up the leaderboard to T4 with a third round of 68 (-3).

Speaking about what it would mean to lift the trophy tomorrow, the 31-year-old German said,

“No doubt about it, it would be a huge deal. It’s something you dream about and I think it’s something that you can use as motivation for practise and getting better and I think that’s what I’ve done obviously my whole career. Tomorrow, it is not about thinking about that kind of stuff. It’s about staying in the moment and playing your best golf and see where it takes me.”

Scrambling for her life down the stretch, the current Race to Costa Del Sol leader Emily Kristine Pedersen holed from 10ft for a crucial par save on the 16th, after similar saves on the previous two holes. A costly bogey at the 17th and 18th will leave a sour taste but a round of 72 (+1) puts her in T7, six shots adrift of Popov.

Overnight leader Dani Holmqvist slipped down the leaderboard to T19 with a round of 77 (+6).