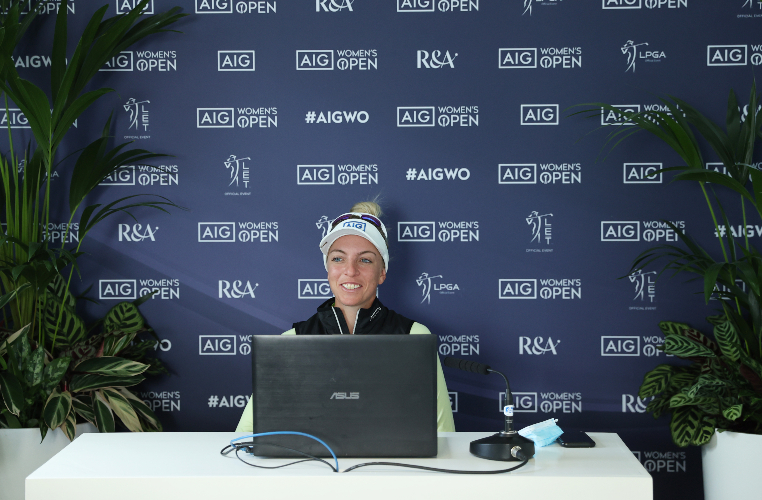 For Sophia Popov, last year’s AIG Women’s Open was the stuff of fairytales, but the German is determined to try and repeat the feat in 2021.

Her two-shot victory at Royal Troon meant she became the first German to win a women’s major championship and the highest ranked player to capture the historic championship.

From caddie to Major winner in a few weeks, Popov admits the win meant so much and it was a dream come true.

“Last year was probably the most special moment of my whole golf career. It is tough to project it onto life because there are other great things that have happened in my life too, but I just think it was definitely a life-changing moment for me as far as my job and my dream job that I’m able to pursue,” she said.

“For years it was very tough and finally to be able to have a breakthrough like that just meant a lot to me and you were able to tell by just how emotional I got. It was a breakthrough for me that was so important, and I was waiting for so long.”

Taking home the AIG Women’s Open trophy and being able to look at it for the past year was a motivation for the German, who is ranked 28 in the Rolex Women’s World Golf Rankings.

And it has only added to her desire to do everything in her power to try and reclaim it at Carnoustie Golf Links this week.

“It was very heartbreaking to have to let go of the trophy,” she explained. “It’s amazing, being able to look at it every time I come home – it’s in the middle of our kitchen counter and it is like a lot of pride that it connected to it. I’m going to do everything in my power to keep it at home. It’s tough but who knows.”

During last year’s championship, Popov made golf look easy despite the tough weather conditions at play at Royal Troon.

Having the ability to think differently and use your imagination is an integral part of links golf and the 28-year-old is relishing being back in that environment.

She added: “The creativity side is the thing I love most about links golf. I love that it’s not a perfect game out. Sometimes with the conditions you get, you have to be able to hit different shots, you have to be creative and extremely patient. Sometimes you can hit really good shots and get punished for them and then you hit some that are not that great, and you get rewarded for them and you have to know that is always an option.”

Popov begins the defence of her title at 12.05 local time alongside South Korea’s Sei Young Kim and American Jessica Korda.