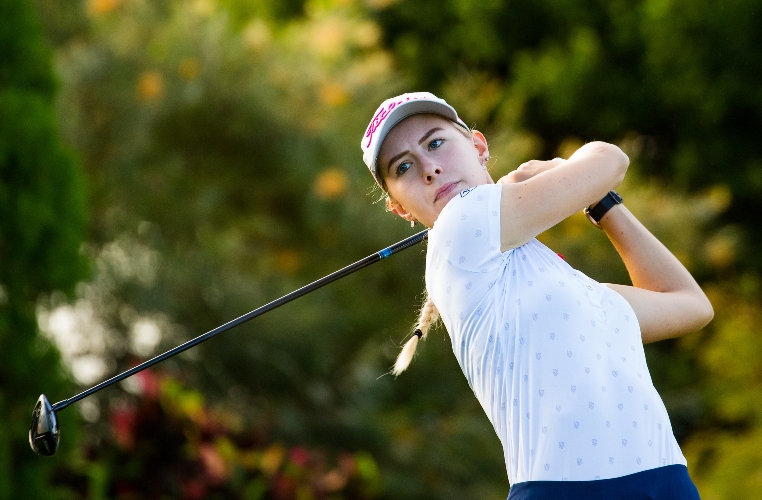 Kristyna Napoleaova and Tereza Melecka are both excited to tee it up in front of a home crowd at this week’s Tipsport Czech Ladies Open.

The duo, who earned status at LET Q-School in December last year, are rookies and have had solid starts to their careers on the LET.

Napoleaova had a spectacular start to life on the LET with a T2 finish at the Aramco Saudi Ladies International and followed that up with T9 at the Joburg Ladies Open.

While Melecka produced her result of the season so far in the individual event at the Aramco Team Series – London last week with 16th place.

“Last week in London was crazy, I got the call on Wednesday saying that I was in, and you have to make the most of those opportunities because the tournaments are great, and l love the team event,” said Melecka.

“It was a little stressful because there was no time to arrange a lot of things or think about things, but it was great. I had my birthday on the Friday as well so that made it even better, and overall, the tournament was great, and I really enjoyed it.”

But the 24-year-old is looking forward to being at home and playing in front of family and friends at Royal Beroun Golf Club.

“I’ve already played this golf course twice and this is the third time, so there’s a little bit of expectation playing at home, but I’m just going to try and enjoy my golf,” she continued.

“I’m enjoying my first year on Tour, the travelling is sometimes exhausting but I’m enjoying every tournament and visiting new countries and new golf courses every week.

“The first goal is to always make the cut, and my best finish is 16th so far so I want to improve on that, top ten would be awesome but I’m trying not to push it.

“My mum and dad arrived today, and my brother and grandfather will arrive on Saturday so I will have a lot of people coming to watch which will be nice, so I’ll try to make that count.”

Former footballer Napoleaova, who lives 45 minutes away from the golf course, didn’t expect her rookie season to go the way it has so far.

But the 26-year-old is enjoying Tour life and coming back to form having had an injury in recent months.

“It’s absolutely amazing having this event back here in Czechia, I’m really looking forward to it and hopefully the weather stays like this,” said Napoleaova.

“I hoped to get some good results this year, but I didn’t expect to get anything like this. I’m hoping that I can start up again and see how it’s going to be like for the rest of the year. There are plenty of events still to go, I’m really excited to do the full year.

“I felt some momentum straight after Saudi, so I was hoping to get on that wave and stay on it as long as I could, but that stayed for one event and then I started to feel the injury. I had a month off and I’m slowly getting back to where I want to be.

“I felt the first two events wasn’t where I wanted to be, I was ready to play but I don’t think my body was, but hopefully now it’s the other way around so we’ll see how it’s going to be, I’m feeling good though.”

The home nation is well represented with no fewer than 15 players hoping for victory on home soil including Sara Kouskova, who won the 2021 Amundi Czech Ladies Challenge on the LET Access Series.

Three-time LET winner Meghan MacLaren will be looking to add further success in 2022, while Sweden’s Johanna Gustavsson and Argentina’s Magdalena Simmermacher – who are third and fifth in the 2022 Race to Costa del Sol – are on the search for their maiden victory.