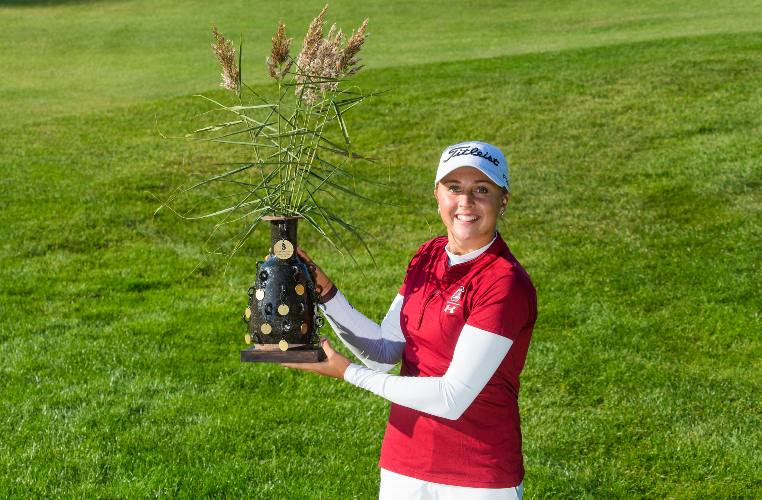 Pauline Roussin Bouchard is the Didriksons Skafto Open champion after edging out a fiercely contested final day with Magdalena Simmermacher on the Swedish West coast.

Despite having a four-shot lead heading into Sunday, things were anything but straightforward for the Frenchwoman, with the Argentine pushing her all the way until the final hole in Sweden, as she secured a one-shot victory with a final score of -11.

Roussin Bouchard claims the victory in just her second professional event, having ended life as an amateur only a fortnight ago, and celebrated the occasion in the best possible manner with a final round score of 68 (-1) enough to seal the deal.

“It was a little bit stressful to be honest, because I played great golf but the putts weren’t going in, and when you see other people making birdies ahead of you it was quite stressful,” Roussin Bouchard said.

“I had three birdies on par-threes, I really learned to play them with this wind because it was pretty much the same everyday, so I knew how to play it on 17 and I just went for it.”

With Roussin Bouchard dropping a shot on the first and the Argentine securing birdies on holes on and two, that four-stroke advantage started to diminish, and after Simmermacher picked up another two shots on five and six the lead was down to one after the front nine.

Another bogey from the former World Number One ranked amateur saw the two players locked on -9 with eight holes to play, before Simmermacher edged ahead with a birdie on the 16th.

But the pivotal moment came on the penultimate hole, as the South American’s under-hit chip saw her settle for a bogey, while the 21-year-old rolled in a birdie to secure a two-shot swing and take a one-shot lead heading down the 18th.

And she kept her nerve to keep that lead intact on the final hole, as she secured her first professional victory at just the second time of asking, having finished fourth in the Four Winds Invitational on the Symetra Tour earlier in the month.

Even if the French talent was feeling the stress, she never seemed to show it on the course, as she was constantly in good spirits with her mum on the bag, and Roussin Bouchard was keen to make the most of the victory with her by her side.

“It was a special moment to share with her, especially now I’m studying in the US so I don’t see her that often,” she said.

This was a win for my mum, my brother, father and grandmother watching from home. I’m the one doing it but I couldn’t have done it without their support.”

Simmermacher finished tied for second spot with the impressive Linn Grant, who shot 62 (-7) on the final day to rocket up the rankings, and give her a top three finish in her first professional event.

The 2017 Ping Junior Solheim Cup player was in inspired form around the greens in Sunday’s action, as she didn’t drop a single shot all day, and ended the day with a fantastic birdie on the last which was met with rapturous applause from the onlooking gallery.

Grant picked up shots on holes three, six and nine on the way out, while another two birdies came her way on 10 and 15, before rolling in two more on the final two holes to cap off a memorable day for the 22-year-old as she finished as the highest Swede in her home country.

“I had a really good day, it was a smooth day of golf. I wasn’t very nervous, I feel that every putt was makable,” Grant said.

“I wasn’t really thinking about winning today, I thought Pauline would shoot six-under or something, I had a good time just thinking about my own game and having a good day.”

Elsewhere in the field, Sanna Nuutinen captured a first top ten finish since the Big Green Egg Open in June after finishing fourth in Sweden, with the Finn matching Grant’s round of the day with a superb 62 to finish eight shots under-par.

The Race to Costa del Sol contender went bogey-free in her final 18 holes, and even chipped in for an eagle on the 15th as she mounted a late charge for the lead.

“I made no bogeys so that’s good. It was still breezy out there, but nothing compared to the first day,” Nuutinen said.

“I was really looking forward to this event, because I love playing in Sweden because it reminds me of Finland!”

Nuutinen closed the gap to the top two in the Race to Costa del Sol after her fourth-placed finish in Scandinavia, as she moves up to 1,281.27 points, and just 26.06 points behind second-placed Steph Kyriacou, while leader Atthaya Thitikul lies on 2,157.46 points.

And with the end of the season coming ever closer, the battle at the top looks likely to go down to the wire, and the 30-year-old still harbours hopes catching her nearest rivals.

“I’m always watching them, whenever we’re coming into the last day I’m always looking to see where Steph and Atthaya are.

“We were all in the top ten this week, and that’s the reason we’re in the top three in the Race to Costa del Sol rankings, so it’s exciting.”

Swedish amateur Beatrice Wallin finished a shot further back in fifth after another steady round of 66, while Race to Costa del Sol leader Atthaya Thitikul tied for sixth with Ingrid Lindblad on -6 after a third round score of 64 (-5).

After picking up birdies on the fifth and seventh, and an eagle on the ninth, things looked to be moving in a positive direction for the Thai star, but she will be left ruing a number of missed putts in her day which could have seen her finish higher up the scoreboard.

Whitney Hillier was another of the four players to not drop a shot in her round today – along with Aditi Ashok (T10) – with the Australian shooting 65 to claim a first top ten finish of the season on -5, as she tied for eighth spot with home favourite Pernilla Lindberg.

After a flawless round of 67, Ashok finished level with Lydia Hall, Steph Kyriacou and Nicole Broch Estrup in tenth spot, with the quartet all finishing four shots under-par.