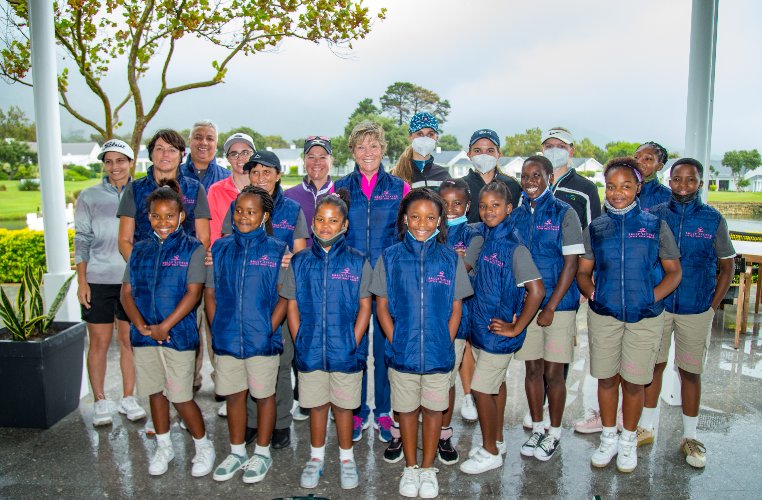 Golfing great Sally Little has always been keen to give something back to her homeland, and with the Sally Little Golf Trust she is inspiring the next generation of South African talent to flourish.

Little, who won 15 LPGA Tour events in her career – including two majors – was born in Cape Town, and was present at the Investec South African Women’s Open on Tuesday to showcase the work she has been doing in the local community.

Working alongside a number of LET pros including Luisa Dittrich and Verena Gimmy, the young local schoolchildren were given the opportunity to practice their talents at Steenberg Golf Club, where Titleist were donating 300 dozen golf balls to the course, and thus giving them an experience, they will always remember.

And Little, who started playing in Cape Town with father Percy as a young girl before rising through the ranks in South Africa and onto the US, believes nourishing the talents of girls from a young age will see the rise of talent in the country in the coming years, as well as setting them up for life if they don’t choose the golfing pathway.

“This programme is in its fifth year now, working with young girls to use golf as a platform for higher education,” Little began.

“We have put 60 girls through from Prestwick Primary School on the Cape and the beauty of it is that they’re all going to better high schools as a result.

“We find that so many of these kids have very poor mathematics, and through the programme we do we switch on both sides of the brain and it improves their mathematics within three months.

“We’ve had such a great success rate, kids are bussed in from all locations to learn English and now we have this programme, and it’s been so rewarding.”

After returning to South Africa a number of years ago, Little seized the chance to start giving back to the golfing world in 2015, where she formed the Little Golf Trust, and thus dedicating herself to educating and empowering the previously disadvantaged through the game of golf.

The students of Prestwich Primary School are transported to the Sally Little Centre for Excellence and provided with food, prizes and the joy of golf, while also learning vital life skills to improve their grades, discipline, perseverance, respect and leadership.

“These youngsters have only been with us for three weeks but you can already tell their talent, and for me when they leave primary school they should be going to schools where they have golf, and hopefully through this programme some schools will pick up golf round here in the Cape,” Little continued.

“We don’t have a talent pool like the men do because girls don’t get exposed to it early enough, and they don’t have the opportunity to carry it on.

“These youngsters have been exposed to golf now and they need to continue being exposed right through high school, and even if they don’t succeed in golf they might become captains in industry.

“The LPGA has offered the opportunity to golfers who show potential who want to get into the business of the game, they can get a degree in whatever you want to do in golf, and they will be the future to grow the game.

“The most frustrating thing to me is that when I was a young girl my hero was Gary Player, because I never had a female to look up to, but that’s what we need here. If some of the talent comes through here, these youngsters will be able to look up to those South African tour players.”