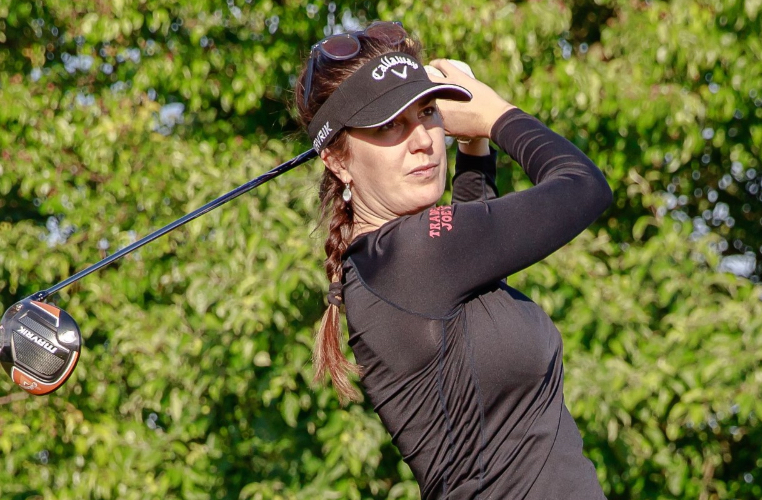 German golfer, the LET and LPGA member Sandra Gal returns to competition after taking some time off due to a medical break. She will resume her tournament schedule at the LET as she plays in the Tipsport Czech Ladies Open from June 25-27.

Beroun Golf Club will welcome Sandra Gal this week to compete in the Czech Republic for the first time in her professional career.

Although being born and raised in Germany, being an LET and LPGA member for the last fourteen years and recently gaining the US citizenship, Sandra Gal will be the local star with no doubt.

Gal was born into a Czech family living in Germany, she speaks the Czech language fluently and likes to return to her parents’ homeland. After a longer period of medical problems, she strives for a tournament comeback after nearly three months at the Beroun Golf Club which is, in addition, her practice base whenever she visits Prague.

“I am excited for the opportunity to play at the Tipsport Czech Ladies Open. Playing in Czechia after fourteen years is going to be an interesting premiere for me as a professional golfer and in front of my parents,” said Sandra Gal.

The 2011 Kia Classic champion had lived in Germany until the age of 19 when she moved to the US to study and play golf at the University of Florida. Before that, she would compete in European amateur tournaments including the Czech International Championship which she won in 2007. In the same year, she gained her LET and LPGA status in the Q-school and has been a member since.

“I am currently on a medical break at the LPGA Tour. In the past few years, my health was not in the best shape, but it was not caused by only one thing. I think that in general it was a consequence of the many years on tour heavy on traveling, bad eating habits and lack of resting. I had no energy, could not sleep, and felt a lot of stress. Playing golf during such times was not easy for me.”

Sandra Gal’s last tournament was the Kia Classic at the end of March. “Ever since coming to Czechia, I feel good. I have changed my diet, improved my fitness, I have more energy, sleep better, and feel calmer.”

She aims to come back on tour after getting back in the game and feeling ready. “My game has gotten better. I play golf three to four days in a row, just like we do in tournament. This event and the next one in the Netherlands will be my preparation, a test to see my readiness to come back to the LPGA which will be in Europe soon after these two tournaments.”

The 2011 and 2015 Team Europe Solheim Cup participant obtained an American citizenship this year which ended up being a special present for her birthday in May. “It feels strange to be an American now, I still cannot believe it. But I will always have the German flag next to my name. Prague and Czechia in general are also like a home to me, I have loved coming here since I was a kid and I always will,” said the star of this year’s Tipsport Czech Ladies Open.

The 2016 Olympian is excited for her first professional start in the Czech Republic at the Ladies European Tour and admits the competition is extremely strong. “The scores were pretty low here last year. As for the LET players, Lee-Ann Pace, an experienced golfer won the first event of the season in South Africa and then in France, on the other hand, young Pia Babnik secured her maiden win. Anyone can win here, the competition is tough.”

Gal also acknowledges the benefit of staying in her own home during the tournament and knowing the course very well.

“I like the golf course here at Beroun. I have played here many times in the last week or so and the results fill me with optimism, even though these have only been practice rounds. I have practiced more on the golf course than on the driving range to get a better feel. The golf course is getting into a better shape every day. Although my distance is not my number one priority right now, I have managed to hit it farther and that is why I am excited to play certain holes, like the seventh or eighteenth,” added Sandra Gal.

The Tipsport Czech Ladies Open is the fifth stop on the LET calendar and starts on Friday, June 25 at Beroun Golf Club.