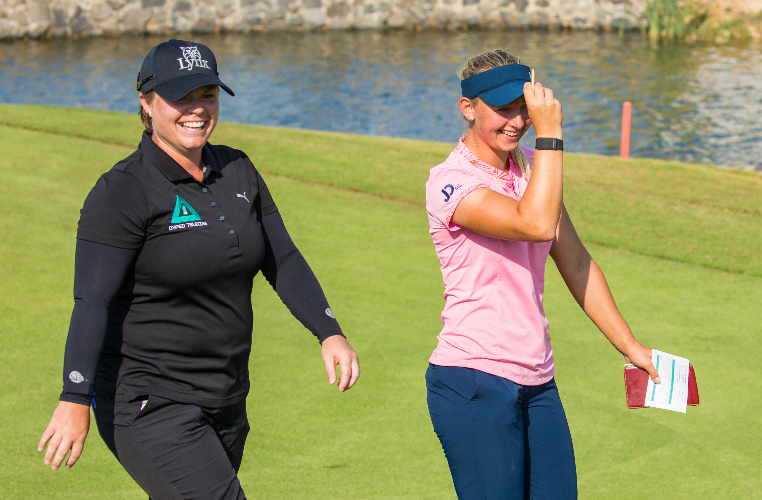 The stage is set for a Sunday showdown at the inaugural Aramco Saudi Ladies International Presented by PIF, with Welsh star Lydia Hall and Denmark’s Emily Kristine Pedersen locked together at ten-under-par after rounds of 69 (-3) and 71 (-1) respectively.

Set to go head-to-head in the final group off at 11.02am alongside major champion Georgia Hall, who sits one-shot adrift after a round of 69 (-3) of her own, Lydia found the lead early with a dazzling display on the front nine.

Racing to the turn in 32 strokes, the former LET winner was as many as three strokes ahead of the chasing pack after her fifth birdie of the day on the short par three 11th hole, only to stumble with a couple of bogeys on the back nine. It might have been worse, if not for a sublime ‘sandy par’ on the last.

As ever, the likeable Welsh star was resolute with her performance as she looks ahead to the prospect of capturing the biggest check of her career with a win tomorrow.

“I got off to a fast start and holed a good putt on the 1st. Shaved the hole on the 2nd and made a really good putt on the third. The wind picked up on the back 9 and I had two bad swings all day.

I’m pretty happy with the result and I’m looking forward to playing with the same group tomorrow again – it’s going to be fun.”

Overnight leader Pedersen may not have had her ‘A’ game on course at Royal Greens Golf & Country Club, but the in-form Dane battled to a round of 71 to keep herself in with a chance of collecting her second victory of the season.

“I am really satisfied to still be in the lead after today, I was a little all over the place, hit some really awful tee shots and it is hard to score when you are not in the fairway. I kept grinding out there, I still hit 16 greens in regulation, but they are just not close enough.”

Lifted by her performance on the final hole, the 24-year-old added,

“I hit it 60 yards offline on the right on the 18th and laid up to 100 yards, which is the sort of wedge shot I like. My caddie told me to go for the centre of the green but I ended up going straight at the pin, a little close to the water, but I managed to make the putt and breathe again.”

Never to be counted out, another Hall, Georgia Hall, looks to make history of her own this weekend and looks to capture her first LET title of the season, the same week as The Masters.

Named after Georgia state because she was born during the traditional date of the tournament in April and for the reason her Dad loved the Masters so much, Hall went agonisingly close to joining the leaders on the last but was excited for tomorrow.

“I was very steady today. I thought I could have holed maybe one or two more putts towards the end, but my long game was really good. It was great playing with Lydia and Emily, I know them both very well. Me and Emily are good friends and it was just fun. I’m looking forward to the same three-ball tomorrow, all nice girls.”

Making giants strides towards capturing the coveted ‘Rookie of the Year’, Australia’s Stephanie Kyriacou tied the low round of the day with a 68 (-4) to jump in to T7 as close rival Alice Hewson faltered to a 74 (+2).