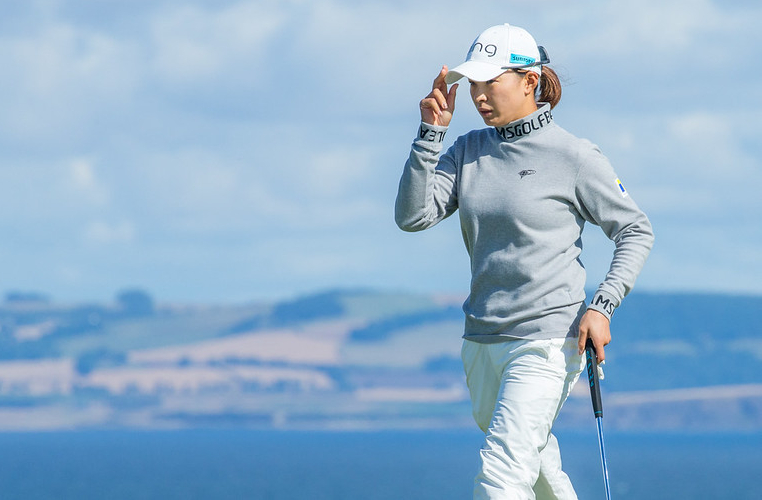 Japan’s Hinako Shibuno fired an opening round of 65 (-6) at Muirfield and holds a one-shot lead at the AIG Women’s Open.

The 23-year-old made headlines back in 2019 when she won this Championship at Woburn in her first event outside of Japan, and she has started the week brightly.

Shibuno, who has the nickname of the ‘Smiling Cinderella’, got off to a quick start with three birdies in a row before dropping a shot on the fourth.

The Japanese star rolled in birdies on the fifth and ninth holes to make the turn in 32 (-4) before making three more birdies and one bogey on her back nine for a round of six-under-par.

“It has been a long time since I’ve played this well, especially putting,” said Shibuno. “Honestly it was a little frightening!

“Two years ago, when we were playing at the Royal Troon, the wind completely over took my shots. I wasn’t thinking about how to use this to my advantage. However, at this tournament I could adapt my style to the elements. It was nostalgic to be on the top.”

One shot behind the leader is American Jessica Korda, who sits alone in second place on five-under-par at Muirfield.

The 29-year-old dropped a shot on the second but soon made up for it with birdies on holes three, five and nine.

A further birdie on 12 saw the US Solheim Cup star climb the leaderboard before an excellent eagle at 17 put her in prime position.

“There’s so much going on on the golf course with the crosswinds and trying to figure out where you want to land the ball,” said Korda.

“It’s nice, at the end I looked at the leaderboard but to be honest I was zoned in to what was going on. You have to stay on it here at all times. The eagle putt was probably 20-ish feet, uphill and into the wind.”

“Today was just a very solid round overall,” Lopez said. “We hit beautiful tee shots with side winds, and into the wind, it’s really easy to get this spiny ball. I was hitting great tee shots and that’s exactly what I’ve been working on in the past couple weeks. I’ve been struggling with my driver and the tee shots and being able to finally get that work to pay off, it’s kind of nice.”

While Duncan, who won the Smyth Salver in 2021 at Carnoustie, had an up and down round with two bogeys, four birdies and an eagle for her 67.

“It was worth the 4.30 alarm! I’m glad it’s over with and I played well,” she said. “I didn’t take it too seriously this morning, I just went out and enjoyed my warmup. It was a relaxed morning considering how early it was and I think that’s what helped me shoot that score.”

Five players are in a tie for fifth place on three-under-par after 18 holes including 2022 Race to Costa del Sol leader Maja Stark, France’s Celine Boutier and England’s Jodi Ewart Shadoff.

“It was very windy,” said four-time LET winner Stark. “I feel like I was mentally prepared that it was going to be raining and nasty golf, which is not super fun, in the beginning. I think we got a little bit of a benefit because the wind wasn’t that strong when it was raining, so that might have made up for something.

“I like the course because you have to think on pretty much every tee shot. It’s tricky, but as long as you’re hitting the greens then you are kind of okay, but when you have 4-Irons into the greens then it’s not very easy to hit them. It’s fun and very challenging. I like that it’s a long course.”

Three players round out the top 10 with Japan’s Miyuu Yamashita and Korean pair Inbee Park and Hye-Jin Choi on two-under-par.