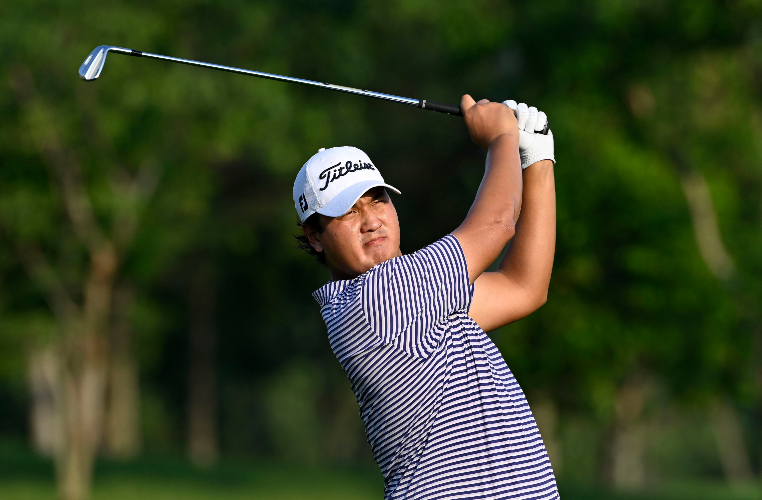 American Sihwan Kim holds a seven-point advantage at the end of the first day of the Trust Golf Asian Mixed Stableford Challenge.

The US$750,000 event which is co-sanctioned by the Ladies European Tour and Asian Tour sees men and women compete for the same prize fund and trophy in a Modified Stableford format.

The 33-year-old shot a round of eight-under-par (64) with nine birdies and one bogey on his card to be at the top of the leaderboard on 22 points.

“It was one of those rounds where you just look at a putt and it goes in,” said Kim. “I didn’t really hit that well off the tee, I probably hit two fairways on the back nine today, but I was seven-under, so I just don’t know.”

This morning saw a two-hour weather delay due to lightning and thunderstorms in the area, so the Asian Tour Order of Merit leader was up against the clock to complete his round.

But darkness descending at Siam Country Club’s Waterside Course didn’t stop him from sinking a 40-foot eagle putt on the last to reach a total of 22 points at the end of day one.

He added: “I didn’t know what the line was, I knew it was too dark to see, I just knew it was going a little right at the end and the horn didn’t really matter because I would have been happy to two-putt in the dark, so I just hit it and it just started tracking and went in.”

Four players are in second place on the leaderboard as Korea’s Joohyung Kim, Hung Chien-yao of Chinese Taipei, India’s Viraj Madappa and Indonesia’s Rory Hie all have 15 points to their name

“It was an okay start, but it wasn’t great to be honest. I was one over after five holes (I started on the back nine) but I had a good birdie on 15, a good birdie on 18, so that got things going,” said 19-year-old Kim.

The two-time winner on the Asian Tour shot a six-under-par 66 with nine birdies and three bogeys; he made six birdies in a row from the 18th through to the fifth.

He added: “That’s my longest streak of birdies in a tournament. I didn’t really realise I was on that roll and when I did I made bogey.  It’s interesting playing stableford, it’s very, very different from playing normally. You have to make a lot of birdies in this format. I think instead of playing a different format you keep playing normally and focus on what I have been doing.”

England’s Jack Harrison and Zimbabwe’s Benjamin Follett-Smith sit in a share of sixth place on 14 points, although the latter still has two holes to finish tomorrow morning.

Finland’s Ursula Wikstrom produced a round of 66 with seven birdies and one bogey to be on 13 points at the end of the first day.

Wikstrom said: “It was really steamy, really sweaty and really hot, but it was a little bit easier today because there wasn’t much wind this morning.

“It was easy conditions because of no winds plus the soft greens and soft fairways. It is a struggle every round here because you feel like you’re in a sauna all the time. I managed to make birdies so I’m happy.

“It was mainly short putts today. I was finally finding my wedge yardages a bit better, so they were short putts and then I was two-putting for birdie on the par-fives.”

While Wannasaen also produced a round of 66 to be on 13 points and was pleased with her approach shots on day one.

“Today was good for my shots, my approach shots were very good, and my putting wasn’t bad, but it was okay,” she said. “The weather we got lucky with no rain, so it was a good day. Most of my putts were short but on the second, I got a birdie with a long putt.”

The first round will be completed on Thursday 14th April with the second round also getting underway as scheduled.