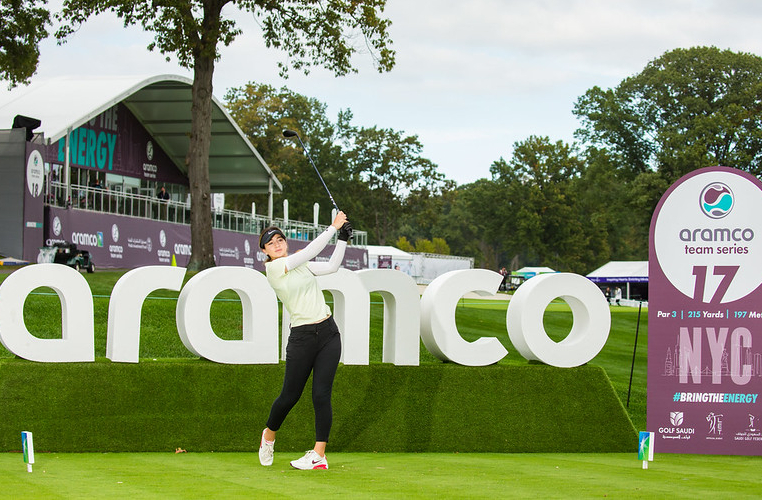 A stellar field has assembled for the Aramco Team Series – New York which takes place at Glen Oaks Club this week.

It is the third event of its kind on the LET this season, after previous editions in London and Sotogrande, as the Tour takes a trip to the other side of the Atlantic.

There will be 28 teams teeing it up in New York as players once again compete for the team and individual titles across 54 holes.

Sweden’s Maja Stark is looking forward to getting a taste of the innovative format as she plays in the New York edition of the event.

The 21-year-old turned professional in August and since then has recorded three professional wins, one on the LET Access Series and two on the Ladies European Tour.

“I’m looking forward to it a lot. I like playing on teams, so this is perfect,” said Stark, who is sixth in the 2021 Race to Costa del Sol.

“I’m hoping to bring confidence to this week. I hope to make a lot of birdies and remember there is an individual competition as well as the team so I shouldn’t go for everything. I have to be responsible.”

A key part of the event is the fact each team consists of three professionals and one amateur with the two best scores on each hole taken forward for the team.

Stark is joined by Wales’ Becky Morgan and England’s Hannah Burke as well amateur David Monahan and the young Swede hopes to be able to offer advice to Monahan.

Glen Oaks Club hosted the Northern Trust Golf Tournament in 2017, which was part of the Fed-Ex Cup Playoffs and Stark has been impressed by the course.

She added: “It’s very nice. The condition is perfect with very fast greens. It has been a while since I have played on greens like this. There are a lot of hills and a lot of greens that are sitting on hills, so you don’t realise how big the slopes are until you get there. There is a lot of variation to the holes and thick rough – it looks like a US Open.”

A host of US stars will also be teeing it up this week including Lexi Thompson, who played at the inaugural London event in July.

Having had that experience before, the 2014 ANA Inspiration winner isn’t going to change her mindset despite having two competitions to look at.

“I think I’m going to play a little bit more aggressive coming into this week, maybe take a few drivers than I usually would, but no different mindset, I think we all just want to play our games,” said Thompson.

“If we have a partner by our side, we can kind of feed off what they’re doing. I think we’re all playing to our own strength and our own games and focusing on that.”

Nelly Korda, who is number one on the Rolex Women’s World Golf Rankings, will also tee it up alongside Finland’s Ursula Wikstrom, Scotland’s Alison Muirhead and amateur Jeffery Capazzi.

“Every week that I tee it up, I try to play my best and hopefully win that trophy. I’m super excited to get this week going. The golf course is amazing and it is a fun tournament,” said Korda.

After playing in both London and Sotogrande, Matthew was picked by American Alison Lee and will also be alongside England’s Trish Johnson and amateur Michael Minto.

She said: “It really gives the amateur a chance to see what tournament pressure golf is like. I’ve been fortunate for two really nice amateurs in London and Spain, but I think it gives them a great insight to see what it’s like actually playing under pressure. I’ve been fortunate to have two great teams and got Allison Lee and Trish Johnson this week so looking forward to that.”

It is a star-studded field and many members of Europe’s winning Solheim Cup teams from 2021 and 2019 are in attendance with Emily Kristine Pedersen, Anna Nordqvist, Charley Hull, Sophia Popov, Bronte Law, Caroline Masson and Anne Van Dam all here in New York.

And nine winners from the 2021 LET season are also ready to make a title for another title at the Aramco Team Series – New York.