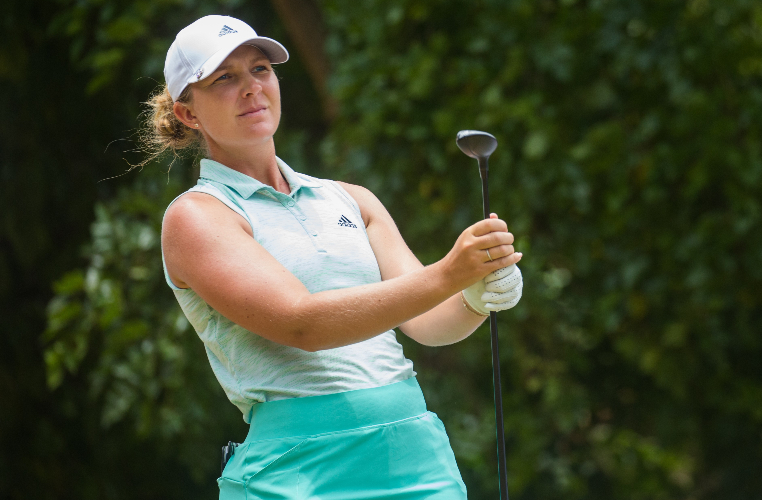 Linnea Ström produced a second round of 73 (+1) to hold a three-shot lead heading into the weekend at the Magical Kenya Ladies Open.

The Swede led overnight and despite being one-over for the day, she still sits at the top of the leaderboard after 36 holes at Vipingo Ridge.

Ström rolled in three birdies, two bogeys and a double bogey on the Baobab Course to remain at the summit of the standings.

“I felt like I played better golf today than yesterday – I had eight birdies yesterday and three today so that makes a big difference,” said the 25-year-old.

“We didn’t have as much wind on the front nine, but I couldn’t really get it going, I had a double on eight which cost me a bit today but overall, I feel happy with where my game is at, I just didn’t get the scoring as good today.

“I feel like I was better off the tee today, which is important on this course, but my putting wasn’t as good today – if I was putting like I was yesterday I would have scored better as well.”

Spain’s Nuria Iturrioz sits in second place on level par after shooting a round of 70 (-2) which included six birdies and four bogeys on the second day.

Five players are in a tie for third place on one-over-par including Scotland’s Michele Thomson who fired the round of the day with a bogey-free 66 (-6).

“I just played really consistently today, and I putted phenomenally. I started on the back nine and started off really well with birdie-birdie, so that was nice,” said Thomson.

“Then I just kind of went out with nothing to lose today because yesterday was so tough out there. I don’t think it was just the way I played; I think the course played really tough.

“It is a tough golf course and you’ve just got to keep your head in the game and let it happen. You’re going to get bad bounces and I got a few of them today, but I got a few good ones as well so that was nice.

“I’m just happy with how things are going. I put the work in over the winter time and yesterday was a little bit disappointing to come off the way I did. You have just got to trust that you’ve done the work and it was nice.”

It was also a good day for Soenderby, who is making her professional debut this week after securing Category 15 status as an amateur LET Q-School in December.

The Dane shot a round of 70 (-2) which included one eagle, four birdies and four bogeys to be in a share of third place.

“So far, it’s going pretty good, I’m just hitting one shot at a time, and I’ve been really good just staying in the moment – my caddie is good at keeping me in the moment,” said the 21-year-old.

“I’ve been good from the tee, and I’ve been holing some important putts out there. I’m hitting good approach shots as well and we’ve been good at calculating the wind, and that’s the key out there.

“I love playing under the pressure, I love when the camera comes out, and I love using those skills that I’ve taught myself over the years.”

Sweden’s Lisa Pettersson, Finland’s Tiia Koivisto and France’s Emma Grechi are in a share of seventh place on two-over-par.

After the conclusion of the second round, the cut fell at +11 with 62 players making it through to the weekend.