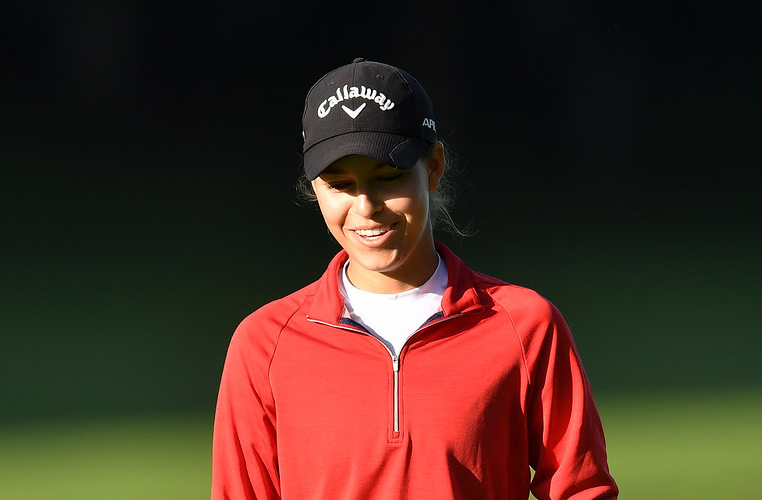 Alexandra Swayne and Lina Boqvist both fired opening rounds of 65 (-7) to sit at the top of the leaderboard on the first day of the KPMG Women’s Irish Open.

The duo enjoyed the better of the conditions at Dromoland Castle with sunshine all afternoon following the morning’s rainfall.

For LET rookie Swayne, who began her round on the 10th tee, her only bogey of the day came at the 12th before she rolled in four birdies to make the turn in 34 (-3).

Further birdies on the second, fifth, seventh and ninth holes ensured the U.S. Virgin Islands native carded a round of seven-under-par on day one.

“I actually haven’t been playing my best, but I know going into tournaments to have no expectations and that’s what I had today and that’s quite helpful. I’ve learned that’s what gets me able to have lower rounds.”

While it was a similar story for Sweden’s Boqvist who also started on the 10th tee and rolled in five birdies on her front nine including four consecutively from 15 to 18.

The 31-year-old then dropped her only shot of the day on the second hole before making additional birdies on the third, sixth and seventh holes.

“It was a solid golf round,” said Boqvist. “I played very well. I had a few saves for par and then a lot of birdies, so it was a nice day on the course.

“On the seventh I had a tap-in birdie which was about 15 centimetres from the hole, so it was an easy birdie. I hit a 7-iron close to the pin! It is tough, but it’s so beautiful up there and the sun was shining also.”

Three players are in a tie for third place on six-under-par with England’s Annabel Dimmock, Czechia’s Klara Spilkova and France’s Anne-Lise Caudal all shooting rounds of 66.

It was an interesting start to the day for Dimmock who made a double bogey on her first hole but that was soon forgotten with a pair of eagle twos on the 12th and 15th holes.

Birdies on 18, two, six and eight ensured the Englishwoman set the early pace and she was pleased with her day’s work.

“It went so far right on the first hole,” Dimmock said. “I’m still really confused as to what happened there.

“I think it was the fact I had my waterproofs on and I was trying to swing and hit in the hazard, but it went pretty well after that. Then I holed out two holes later and I thought that made up for what happened on the first.

“I have been playing really well for months at home. I’ve had a lot of mental battles the past year or so and especially the last six months. I can’t thank my family and friends that have been around me enough.

“It just shows you that I’m not doing anything different to what I was a year ago or six months ago, I have changed my putting a bit and that’s helped a bit but apart from that nothing really. It shows if you’re happy mentally and in a good space then life is a lot easier.”

Whereas it was an error-free day for both Spilkova and Caudal in Ireland for them to sit one shot back after 18 holes.

The Czech golfer said: “It was a pretty smooth round actually; I made a couple of good up-and-downs as well which is why I was bogey-free. I also made some putts for birdie and that also helps, and the greens are really smooth and really nice. I enjoyed it today very much.”

While Caudal explained: “I’m very happy with my day, I was bogey-free with six birdies and finished with four birdies in the last four holes, so I’m very happy and can’t complain. I have been playing well for the last few weeks, I just didn’t finish well, and I had some bad last days. I’m trying not to think about that and keep going and be patient and make a lot of birdies.”

Seven players are in a tie for sixth place on five-under-par including home favourite and Solheim Cup star Leona Maguire.

The LPGA Tour winner started her day with a bogey at the first before a birdie on the third, but soon dropped another shot with a bogey on fifth.

However, after that the Irishwoman carded three birdies in-a-row on holes six through eight and finished in style with three birdies in her final four holes to be two shots back.

“It was nice that little birdie run on the front for a bit of momentum on six, seven, eight,” said Maguire. “I putted nicely today. I didn’t drive the ball quite as well as I would have liked but overall took advantage of the shorter holes coming in and it was nice to birdie three of the last four.

“It’s been a fantastic venue. The course even after the rain this morning was in great shape and the greens were rolling really nice. I’m looking forward to three more days.

“Anytime you make a few birdies the energy levels always go up. It’s been a busy few weeks, but it’s nice to be back in front of home fans and there’s been a few people around today and it’s nice to get those cheers when you hole a putt or hit a nice shot and it spurs you on a little bit more.”

The second round begins at 8am local time on Friday morning and there will be a cut at the end of the day with the top 60 professionals and ties making it through to the weekend.