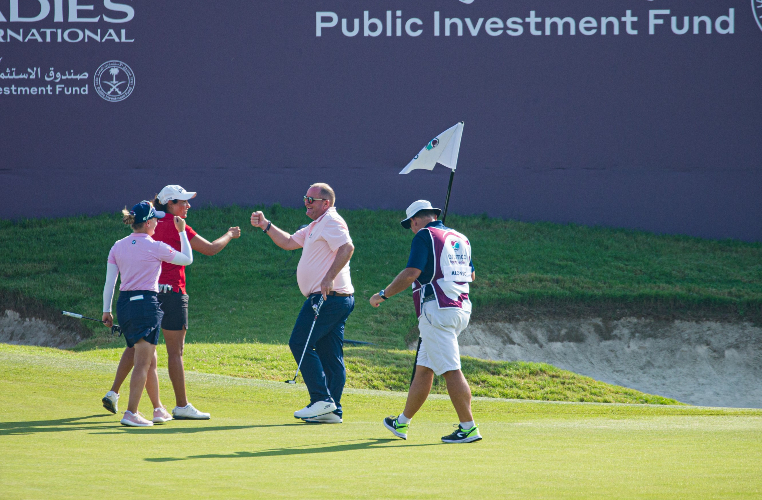 Team De Roey produced an excellent second day at the Aramco Team Series – Jeddah by carding a round of 20-under-par to move to the top of the leaderboard.

After starting the day in a tie for third place, the quartet of Manon De Roey, Carmen Alonso, Elina Nummenpaa and amateur Nic Davies had a slower front nine.

They made the turn in -8 for the day in part thanks to De Roey’s eagle on the 18th, but the front nine was where the team excelled with Davies clinching two birdie-net-eagles to help them reach the summit of the standings.

“I’m very happy with my team, they fought really hard today – we didn’t do too well on the front nine, but we came back really strong on the second nine, so I’m very proud of them, and happy with my performance as well,” said the captain.

“I love playing this course, it’s very scorable out there, as a team you encourage each other and you fight, it’s a great atmosphere and I’m very excited.”

Alonso added: “To play in this format is easy for me, I try to be positive all the time to encourage everyone to do well and we did, we need to keep going tomorrow and we’ll see what happens.”

From the morning starters, it was Team Kyriacou who posted the best round of the day with -22, which is also the best team round of any Aramco Team Series event in 2021, to be in second place with total of 35-under-par.

Captain Stephanie Kyriacou produced a round of 65 (-7) to be contending on two fronts and sits T5 in the individual competition on 10-under-par.

“I played well today, I hit it better today than last week, which was good, I gave myself a lot of chances and holed most of them, so it was a pretty cruisy day,” said the Australian.

Team G. Hall, who led overnight, backed up their first round with a second round of 15-under-par to move to 34-under overall and be in third place just three shots behind the leaders.

“We all get on really well and Maha [Haddioui] had a really good day today, if one of us is in a hole the other two come in so we’re not far off the Team event either, so tomorrow should be an interesting day,” said captain Georgia Hall.

Individually, the Major winner is only two shots off the front and produced a round of 68 (-4) to be 11-under-par for the tournament.

“I managed to have a couple of good shots, but overall, I’m slightly disappointed in my day, I didn’t feel like I was getting anything going but hopefully I’m saving that for tomorrow,” continued Hall.

“On this course you can make a lot of birdies, and I’m two shots behind on the individual which isn’t a lot, that can be made up in three holes, I’m just going to go out there and stay aggressive and hopefully that will help the team as well.”

Leading the individual competition is Germany’s Olivia Cowan, who was the co-leader alongside English star Hall overnight.

The 25-year-old recorded a round of 66 (-6) which included one eagle, six birdies and one bogey to top the standings once again.

“I’m very happy with how I’m playing at the moment its quite steady, I’m giving myself a lot of chances to hole putts which is important round here. I’m reading it right, getting a good speed on and getting them to drop,” said Cowan.

One of the highlights of the day was the German’s eagle on the seventh which she holed from her second shot and despite finding the water on her last hole, she recovered well to lead on 13-under-par.

“It was a great shot [on the seventh] and we watched it going slowly closer to the pin before it dropped which was nice,” she continued.

“I pulled my second shot [on 18] a little bit into the water, which was a shame, but then I hit it into the rough, so I wasn’t sure how my chip was going to come out, then it hit the pin and didn’t go in, but I’ll take the bogey.”

One shot behind Cowan is Argentina’s Magdalena Simmermacher who carded another round of 66 to be 12-under.

“I think I struck the ball really well like yesterday, the wind came into play on the back nine, but I managed it pretty well and I was pretty consistent,” she said.

“The last couple of holes I was quite tired, and my swing was a bit uncoordinated, but I gave myself chances and the putts went in, so it was good.”

Simmermacher held the lead going into the final day of the Estrella Damm Ladies Open Presented by Catalunya and ended up T14, but the Argentine has taken on board what went wrong in Spain.

“I’ve learned from that experience – it did hit me when things went the wrong way before, so I’m going to try and shoot another low one tomorrow and see if I can get the win,” she added.

Winner of the 2021 Dubai Moonlight Classic, Bronte Law, fired the joint-best round of the day with a 64 (-8) to be sat alongside Hall in third place individually.

Kyriacou is T5 on 10-under with Solheim Cup star Carlota Ciganda and 2021 Race to Costa del Sol champion Atthaya Thitikul.

Pia Babnik and Becky Morgan share eighth place one shot further back while Gabriella Cowley and Maiken Bing Paulsen round out the top ten.