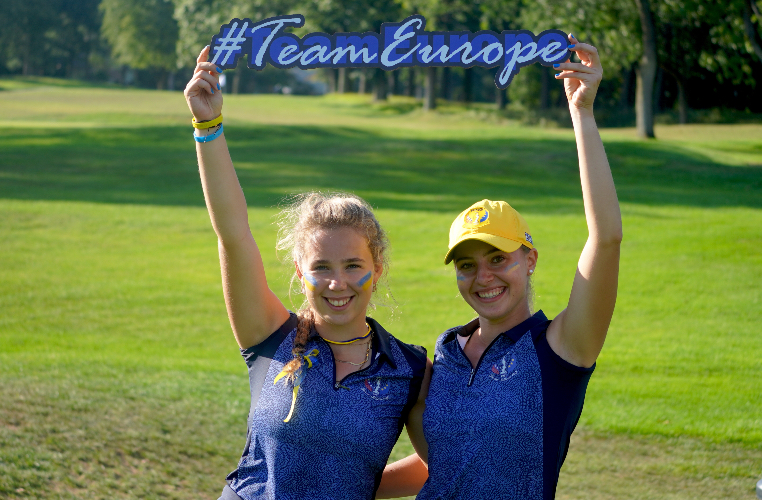 A very even morning at Sylvania Country Club had the best girls from Team Europe and Team USA share the six points in opening fourball matches.

With the scores level at 3-3, the teams headed out to compete in the afternoon foursomes at the 2021 PING Junior Solheim Cup.

Halfway through the afternoon session in Toledo, the matches and scores remained equal, and it looked as though it was set to stay that way.

But the Americans turned up the heat in the latter stages of their matches and ended the day with an 8-4 advantage with twelve singles matches remaining.

Denmark’s Amalie Leth-Nissen and Germany’s Paula Schulz-Hanßen clinched the only afternoon point for Team Europe as they battled back after losing their morning fourball.

The duo, who were both part of the European PING Junior Solheim Cup team in 2019, put their experience to good use and dazzled in the afternoon.

Four birdies on the first six holes put the European pair in pole position and they did not look back as they won 6&5 against Bailey Shoemaker and Sara Im.

Schulz-Hanßen admitted: “I didn’t even realize we had that many birdies, we were only two or three up at that point. Amalie holed some great putts which helped us put some pressure on the US duo. We only made two bogeys and the total score was four-under for the round.”

Just like in the morning, the European team fought all the way until the end with the shortest match finishing on the 16th hole as French duo Vairana Heck and Constance Fouillet were defeated 3&2 by Kaitlyn Schroeder and Yana Wilson.

Three afternoon matches ended on the 17th hole with Team USA winning them by scores of 2&1 to seal the lead.

The final match put on a great show with all eyes on the them as they battled it out for the final point of the day.

Team USA’s Anna Davis and Catherine Rao eventually got the better of Czechia’s Denisa Vodičková and Italy’s Francesca Fiorellini, as they won 1 up with the Europeans struggling to take advantage on the final three holes.

Tomorrow promises to be a great day with spirited play as the winners of the 2021 PING Junior Solheim Cup will be crowned. The twelve singles matches will start at 9am local time.