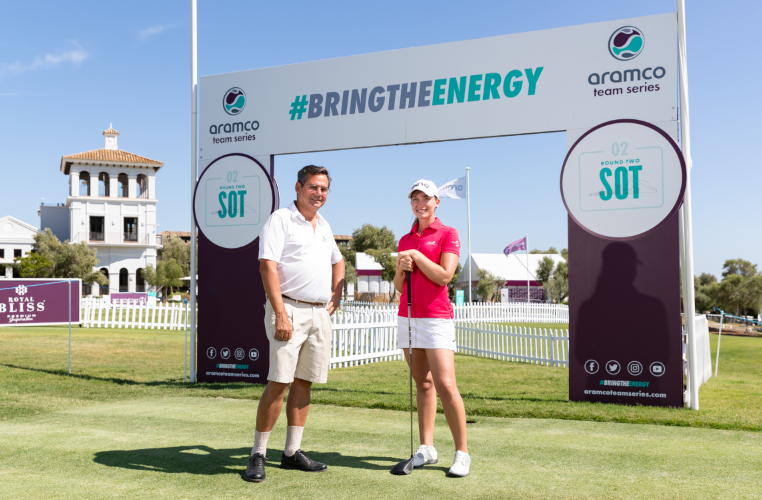 The Aramco Team Series – Sotogrande has announced a new charitable initiative to help boost women’s golf in Spain ahead of this weekend’s tournament in Sotogrande, as part of its Ladies First Club aimed at bringing more women and girls into the game.

Every single birdie ($10) and eagle ($100) made by players across the three-day Ladies European Tour team event at La Reserva Club will generate funds to be donated to the Andalusian Golf Federation.

All money raised will go towards the development of female golf in the region, including the support of girls across its future talent pathways as well as female grassroots initiatives to inspire participation in the sport, ensuring the tournament leaves a lasting legacy on the local area.

At each of its four events around the world, the Aramco Team Series is committed to making golf more accessible to women and girls by providing impactful and long-term golfing opportunities on the ground through the Ladies First Club scheme. The initiative – launched last year – has already introduced more than 1,000 women and girls to the game, and at the Aramco Team Series’ inaugural event in London last month saw Tour pros host inspirational workshops with both The Girls’ Network mentoring charity and female members of the Muslim Golf Association.

This week’s commitment hopes to provide a significant financial lift to ladies’ golf in the south of Spain, come the end of 54 holes of golf on Saturday.

Pablo Mansilla, President of the Andalusian Golf Federation said: “This support from the Aramco Team Series really supports the vision to drive more women into golf in the region. We are fortunate to be known for our golf in this part of Spain and have a strong foundation. Thirty-seven per cent of all golf club members are females, which is very high compared to other sports, but we can always do more. We must strive to increase that and these funds alongside the tournament itself are a massive boost.

“We want to help make golf more accessible no matter your background, age or ability. The power of golf and sport goes beyond the course, it gives you so many lessons for life and connects you to so many wonderful people from all around the world as we are experiencing again this week with our friends from Saudi Arabia. It really is a game for anyone, and we thank the Aramco Team Series for the energy they are bringing to golf.”

The announcement was made with the support of Laura Gómez, a member of the Ladies European Tour and local resident of Marbella who grew up and progressed through the ranks of the Andalusian Golf Federation. Gómez who knows the course at La Reserva Club very well is looking forward to a special week playing in front of home crowds.

“Everything about this week is perfect. The player field, the team format, the prize-fund and playing in Andalusia. But to now see that every birdie and eagle will help female golf in the area grow even further makes it extra special and adds a further incentive for and all the other Spanish players. It’s a really generous gesture.”

The Aramco Team Series – Sotogrande gets underway on Thursday at La Reserva Club, Sotogrande – running through until Saturday.

Free tickets remain available online at www.aramcoteamseries.com/sotogrande, with the tournament adhering to all COVID-19 protocols, as well as local and government guidelines.