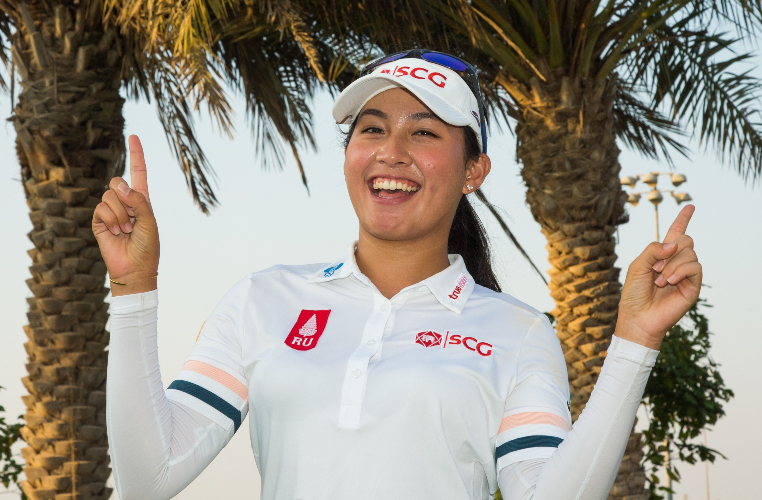 Thailand’s Atthaya Thitikul clinched the 2021 Race to Costa del Sol title thanks to her second-place finish at the Aramco Saudi Ladies International.

In her first full season on the Ladies European Tour, the 18-year-old has been consistent throughout 2021 managing to secure the title with two events remaining in the LET calendar and she becomes the youngest winner of the accolade surpassing Charley Hull’s previous record.

The Thai teenager has only finished outside the top ten on three occasions in individual events in 2021 and has added two further LET titles this year winning the Tipsport Czech Ladies Open and VP Bank Swiss Ladies Open.

“It is an honour to win the Race to Costa del Sol this year,” said Thitikul. “Words can’t describe how I’m feeling. It is really great to win the title and it is amazing for me!”

Thitikul, who holds the record as the youngest winner on the LET at 14 years, 4 months and 19 days, also follows in the footsteps of Dame Laura Davies, Carlota Ciganda and Esther Henseleit by winning both the Race to Costa del Sol and Rookie of the Year titles in the same season.

The four-time LET winner, who has risen from 308 to 24 in the Rolex Women’s World Golf Rankings, is also the first player from her homeland to win the season-long crown and the third winner from Asia.

“Last year I stayed at home with the pandemic, and I didn’t play on Tour after February. I practiced at home and worked really hard, and I think it has paid off this year. To have won the title in my rookie year as well is great,” she continued.

“It is the first year that I have been away from home for three or four months, it has been tough, but it has been an experience I can learn from. I have travelled without my parents, usually my dad always travels with me, but I have been here with my manager and my caddie. I feel really grateful to be out here and competing in international tournaments.”

Thitikul returned to the LET in June finishing tied for sixth at the Jabra Ladies Open and followed that with T65 at the Scandinavian Mixed before winning her first title of 2021 in the Czech Republic.

From then the rising star had a phenomenal run of form with six results in the top five including fifth place at The Amundi Evian Championship.

A T48 finish at the AIG Women’s Open was only Thitikul’s second result outside the top ten and after that she finished T6 at the Didriksons Skafto Open and in third place at the Creekhouse Ladies Open.

Thitikul rounded off the summer in Switzerland, where she clinched her second title of the year, and went back home to Thailand on a high.

After some time off, the 18-year-old returned refreshed at the Dubai Moonlight Classic finishing in 14th place before her runner-up finish in Saudi Arabia gave her an unassailable lead in the rankings.

“I don’t think about how many victories I have; I just try to improve my game and focus on that because you can’t win every week. Getting better every single day is what I am trying to do,” she explained.

The Andalucía Costa del Sol Open De España, which will be held at the beautiful Los Naranjos Golf Club next week, is the LET’s season finale and heading into that event, Thitikul has 3,361.96 points in first place while Pia Babnik is second with 1,909.89 points.

For more news and information on the Race to Costa del Sol, check out the rankings here.