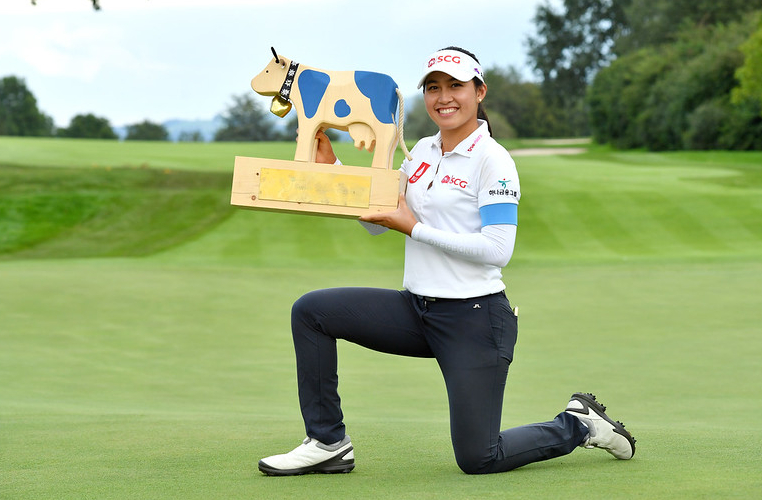 The 18-year-old sat four strokes off the lead after the conclusion of the second round but made an excellent start to her final round.

Four birdies on the front nine propelled Thitikul to the summit of the leaderboard, as she made the turn in 31 at Golfpark Holzhäusern.

The Thai star was playing alongside Norway’s Marianne Skarpnord, who pushed the teenager all the way with the duo tied for the lead after 15 holes.

But it was back-to-back birdies on 16 and 17 that ensured Thitikul set the clubhouse lead of 16-under-par, and no one was able to catch her as she secured her fourth LET title.

“I hit pretty good shots out there and I gave myself a lot of chances to make birdies. I rolled the putts really well today and was making a lot of them,” said the 2021 Race to Costa del Sol leader.

“I worked really hard last year with my coach, and I think all the results tell me that I’m working in a good way, and it is paying off. I’m so happy to get another win.”

At the Aramco Team Series – London, it was Skarpnord who beat the young star in a playoff at Centurion Club but this time the Norwegian couldn’t getter the better of Thitikul.

A round of 68 which included five birdies and one bogey meant Skarpnord finished in outright second place on 15-under-par.

“I felt I played pretty good today, there were probably a couple more putts that could have dropped but I’m playing with a player who just doesn’t make any mistakes,” said the five-time LET winner.

“Obviously, I would like to win but I’m happy to see Atthaya win, she deserves it, and she is so good. I have had a couple of good weeks now so hopefully I can finish off the year with a few more, then we can call it a decent season.”

The Swiss amateur made the turn in 32 after rolling in three birdies, despite dropping two shots on the back nine she holed out for birdie from the bunker on 17 and added another birdie on 18.

“It was really great. I felt good this morning and it was really nice to have all those people. I wasn’t that nervous and that helped. In the end, I got two lucky shots which really helped me out,” said Moosmann “The bunker shot was amazing. I thought to myself just make par and it went in and wow!”

Metraux held a share of the overnight lead but started her round with a bogey on the first, she rolled in a birdie on 10 before dropping another shot on 11.

Another birdie on 14 moved the Swiss star onto 14-under-par and her T3 finish is her best result of the 2021 season.

“I could have done a bit better today, but I gave it everything I had and I’m really proud. I didn’t quite hit the ball as solid in my first shots into the green today and when I had a few opportunities, I didn’t quite capitalize on them so that was how it happened,” said the 26-year-old.

“That is great to have two Swiss players up there – Elena is an excellent player and I have no doubt that she’s going to have a great career, so for her to finish third as an amateur is really nice and great for Swiss golf.”

Italy’s Virginia Elena Carta produced the round of the day – a 65 – to climb up to T5 on 12-under-par where she was joined by England’s Eleanor Givens.

Emma Grechi, Nicole Garcia and Chloe Williams all finished the tournament in T7 on 11-under-par while Anne-Charlotte Mora rounded out the top ten.

Earlier in the day, Austria’s Christine Wolf produced the second ace of the week after making a hole-in-one on the par-three 15th.

In the 2021 Race to Costa del Sol, Thitikul’s second win of the season means she extends her advantage at the top of standings, and she now has 2,887.46 points from 13 tournaments.