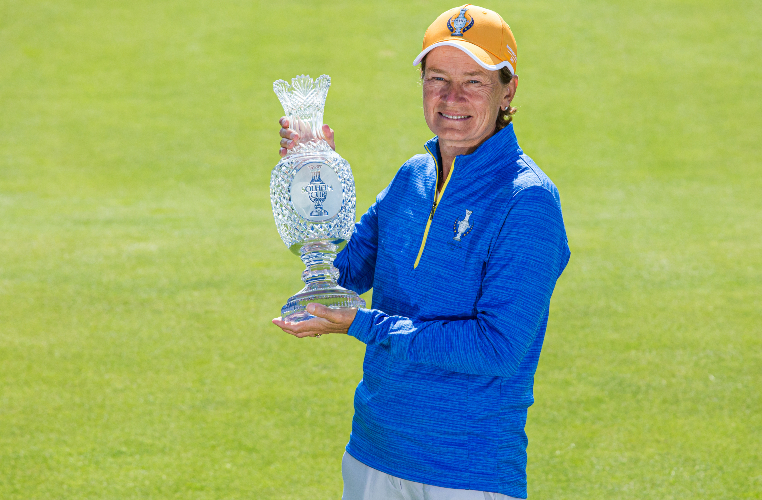 A mixture of new names and experienced players have been chosen to represent Team Europe at the 2021 Solheim Cup as captain Catriona Matthew picks three rookies.

The conclusion of the AIG Women’s Open saw the qualification window for the Solheim Cup close and Matthew had to make her final decisions on who would make the team that seeks to defend the coveted trophy.

Three players will get to experience the Solheim Cup for the first time as Ireland’s Leona Maguire, Finland’s Matilda Castren and Denmark’s Nanna Koerstz Madsen have been chosen by Matthew.

Castren clinched her first LPGA Tour win this year when she won the 2021 LPGA MEDIHEAL Championship and a few weeks later, she secured LET membership and became eligible for consideration when she won the Gant Ladies Open in her homeland.

The 26-year-old becomes the first Finn to represent Europe at the Solheim Cup and Castren admits it is a dream come true.

“It has been one of my goals and dreams since I was a little girl. It is just so cool to see it happen. I can’t describe it, I’m super happy. It’s hard to contain my excitement. To be the first Finn is such a huge honour and I’m super proud to represent my country.”

Another player making history is Maguire, who becomes the first Irish player to represent Europe at the Solheim Cup.

The 26-year-old, who finished T6 at The Amundi Evian Championship, put on a good performance at Carnousite to end the tournament T13.

“I’m really excited, it is something that I have looked forward to. I have played the PING Junior Solheim Cup in 2009 and 2011, it was an incredible thing to be part of the Junior side so to be on the ‘big’ team is something really special and no Irish person has ever done it before,” said Maguire, who sits eighth on the Race to the CME Globe.

“I think it’s going to be great for Irish golf and to show the young girls coming up that it is possible to do things if you set your mind to it. Catriona is a legend in her own right – a winning Solheim Cup captain and a Major winner. For her to think I’m good enough to be on her team is quite humbling and an honour.”

While Koerstz Madsen just missed out on automatic qualification through the LET points, her consistent performances and T5 finish at Carnoustie secured her pick.

Sweden’s Madelene Sagstrom who was part of Team Europe in 2017, also returns to the side after putting on a show at Carnoustie this week.

The 28-year-old finished in a tie for second place and can’t wait to be back with the European team at the Solheim Cup.

She said: “I feel super excited to represent Europe at the Solheim Cup, yet another time. 2017 was my first time and it’s what everyone dreams about doing. The atmosphere is phenomenal and it’s playing on the world’s biggest stage. It’s an honour to be there.”

One of the breakout stars from Europe’s winning Solheim Cup team in 2019 was Celine Boutier and Matthew has put her trust in the Frenchwoman once again.

Boutier said: “Being part of Team Europe for the Solheim Cup this year was a goal of mine and it has been since the last edition in 2019. I’m so happy that Catriona has picked me to represent Europe once again and I can’t wait to play in Toledo.”

England’s Mel Reid missed out on a pick last time out at Gleneagles and took on vice-captain duties during Europe’s victory.

The 2020 ShopRite LPGA Classic winner is raring to go and excited to return to the Solheim Cup stage at Inverness Club in September.

Reid added: “I’m not shy when I speak about how much the Solheim Cup means to me, so to be back on that team again means the world. I think the team is looking strong and I’m already excited to see everyone in just over a week!”

The six picks will be joined by Denmark’s Emily Kristine Pedersen and England’s Georgia Hall, who qualified on Solheim Cup points.