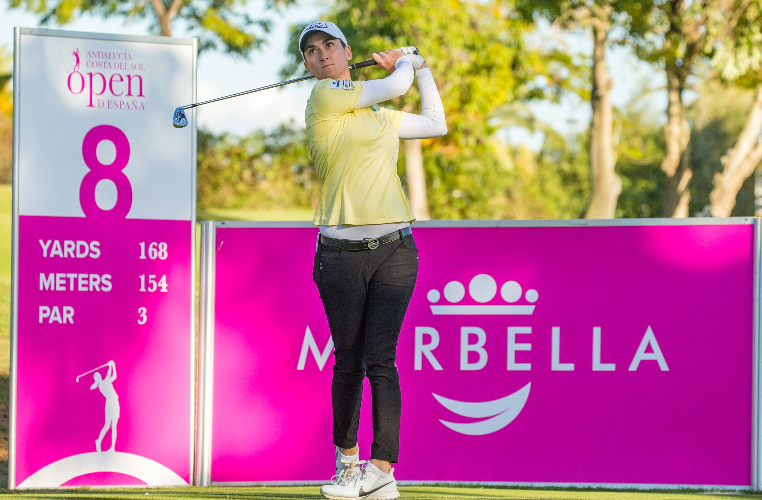 Three players sit in a share of the lead on three-under-par after the first round of the Andalucía Costa del Sol Open de España.

Spain’s Fatima Fernandez Cano, France’s Anne-Lise Caudal and Belgium’s Manon De Roey all fired rounds of 69 to be at the top of the leaderboard at Los Naranjos Golf Club.

It was the Belgian who posted her score early on having been drawn in the first group of the day and she started from the 10th tee.

The 29-year-old made the most of the par-fives on the course securing two more birdies on the second and fifth holes to finish on three-under.

Birdies on 16 and 18 saw her make the turn in 35 and the Belgian made the most of the par-fives with two more birdies on the second and fifth holes.

“It was nice to be first out. It was quite windy this morning and cold, but the course is in good shape and the pins are very accessible today. I’m happy with my round. I had a little bit of a slow start out there, but I made some birdies on the back nine,” said De Roey, who is 43rd in the Race to Costa del Sol.

The Belgian comes into the Andalucía Costa del Sol Open de España in good form having led her team to a T4 finish at the Aramco Team Series – Jeddah.

She continued: “The end of the season is always better for me for some reason. I always have a slow start to the year and play better towards the end. Aramco Team Series – Jeddah was really fun with the team, and I have that momentum going here.”

Caudal was another player who teed off from the tenth and despite making bogeys on the 15th and 16th, the Frenchwoman bounced back with four birdies in a row at the turn and added a fifth on the sixth hole to be tied at the top.

“I’m very happy with my round today, I played really consistent and stayed very patient because I was two-over after six holes. I knew it was a tough course with small greens and it is windy, if you get some chances then you can shoot quite low,” said Caudal.

“On the second hole, I hit it in two and then two putts because it wasn’t an easy second shot and then I hit really close on the sixth so that was also a great birdie.

“I do like the course, I’m from a course which is similar where your feet are never flat with the ball, and I also like small greens. I like that you have to think a lot about the shots, I’m going to try and do the same and stay patient and we will see on Sunday.”

Home player Cano rolled in five birdies and two bogeys for her round of 69 to join Caudal and De Roey on the top step of the leaderboard.

The Spaniard has had an excellent 2021 on the Symetra Tour where she finished second in the Race for the Card to earn LPGA Tour membership for 2022.

“It was a good round, very solid and organised. I had one bogey on the front nine, I was a bit unlucky with my second shot but overall, it was very solid, I left a few out there so I’m looking forward to tomorrow,” said the 26-year-old.

“It’s great to play in Spain, I’ve been looking forward to playing this tournament for a while now, I couldn’t make it last year, so it gave me a little extra motivation to come out here to play in front of my family, my friends and my people and I’m really excited about it.”

One shot back from the leaders are four players who sit on two-under-par having fired round of 70 and they include Spain’s Carlota Ciganda.

The three-time Solheim Cup winner had three bogeys and five birdies on her card to be in a tie for fourth place after the first day.

“I’m pretty happy, I think it’s a tough course and it’s playing quite tricky. The front nine is quite hilly so you have a lot of different lies – uphill and downhill,” said the four-time LET winner.

“The greens are quite small as well so it’s not easy to hit it nice to the pin. The back nine is a bit flatter, there’s a few more options but it was windy and quite tough so anything under par is a great score here.”

Two more home favourites are in the top 10 at the end of day one as Ana Pelaez and Nuria Iturrioz both shot one-under to be tied for eighth place with Swedish duo Caroline Hedwall and Isabella Deilert, and India’s Aditi Ashok.

One of the moments of the day came when Lee-Anne Pace, who won the 2013 Open de España, secured a hole-in-one at the par-3 eighth hole.