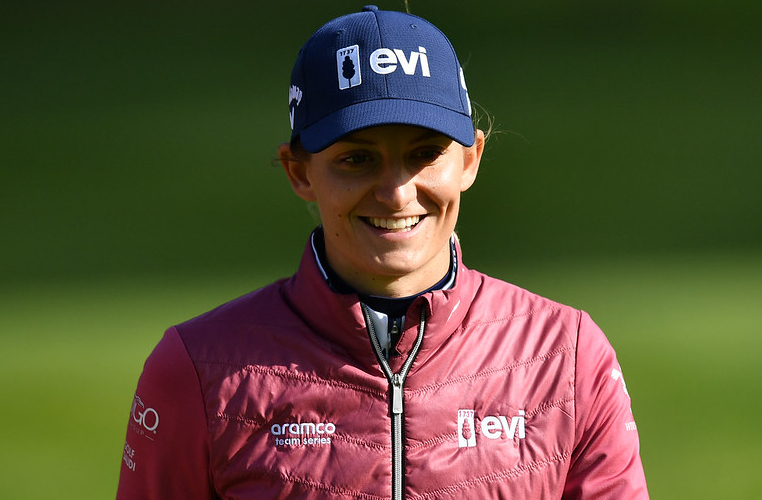 Anne Van Dam continued her consistent week in Ireland and a round of 70 (-2) was enough to give her a one-shot lead heading into the final day of the KPMG Women’s Irish Open.

The Dutch star began her day with a birdie at the first before making a bogey on the second, but rolled in birdies at four and six to make the turn in 33 (-2).

Despite two more dropped shots on the back nine, Van Dam also made two birdies at 15 and 16 for a round of two-under and to put her on 11-under-par at the top of the leaderboard.

“It was a crazy day! It was definitely playing the toughest out of the three days so far, it was colder and very gusty and windy,” she said.

“Plus, the wind was in a slightly different direction, so I was guessing a little bit on some shots. It didn’t work out the best for me but that’s golf and it’s also golf that after a round like this you can still be leading.

“Overall, I think they did a good job with where they put the pins and where the tees were. There were definitely chances out there even though it was so windy. Maybe I’m a little bit disappointed that I didn’t get a few more in, but what can I say I tried my best every shot and this is where I ended up.”

There has been a change in coaching and mindset for Van Dam over the past year and she has gone back to basics and is focusing on playing golf rather than the technicalities of the sport.

She continued: “It’s so easy with golf to get super technically and go back to the range and go back to the putting green and do your drills and work with putting mats and all that stuff. After last year, I was like what am I actually doing? I’m so far away from just being comfortable and just playing golf and seeing the shots that I hit.

“As a kid, I would just stand out there and if I saw a fade, I would hit a fade and if I saw a draw, I would hit a draw. That’s what I went back to this off-season, I said I’m not going to work with any coaches and do my own thing and see how it goes and get comfortable. That’s what golf is all about. You can play it one hundred million ways and I’ve gotten the joy back because of that as well and the only person I’m truly playing for is myself.

“It’s definitely been a big change. Even today, I didn’t play my best and 17 – what can I say about that! Nothing good and I go to 18 and try to hit a good drive and put a good swing on it and I’m getting a lot better at that and I’m proud of that change this year.”

It’s a stacked leaderboard behind the five-time LET winner with six players tied for second place on 10-under-par with one round left of the tournament.

Sweden’s Jessica Karlsson produced a great round of 67 (-5) on day three to move just one shot behind the leader while it was also a good day for England’s Annabel Dimmock who shot a 68 (-4).

After rounds of 70 (-2) and 66 (-6) on the first two days, Broch Estrup followed up with another round of 70 to be within touching distance at the end of day three.

“It’s a really nice place, the course is in really good condition and the weather is typically Irish,” said the 2015 Helsingborg Open champion. “Today was challenging, it was a little bit colder and a little bit windier plus that was in a different direction as well.

“This morning I knew it was going to be a tough day for me because playing up there is not something I’m used to lately but I’m really proud of my effort out there. I was not hitting a whole lot of fairways and greens, but I was grinding my way to a round of two-under.

“Even with a really annoying three-putt on 17 and on that green, I said to Kasper that I almost started crying because the anxiety just hit me after I missed that first three-footer, so to be able to make the next one and hit a good drive on 18 was something I can definitely carry into tomorrow.”

The 29-year-old has been open about her struggles with anxiety and feels that she is in a better place to cope with being near the top of the leaderboard than she was a few months ago.

She added: “Yesterday, I was two-over after five and ended up shooting 66 (-6), but you have to get through the front nine and yes, there’s a lot of birdie chances on the back nine but then if you don’t get them, you feel like you’ve dropped a shot. It works both ways. A couple of bad bounces today and a couple of really good ones too, so I’ll take two-under.

“I’m definitely more confident being in this position than I was three or four months ago because I feel like I’ve been there more. I’m definitely working on it, and I hope I can go out there tomorrow and prove to myself that I’m okay and it’s just golf. I hope that I can pull some good shots off.”

A round of level par for Alonso means she is still in contention heading to final day and the Spaniard, who has been a pro for 18 seasons, is still searching for her maiden LET title.

“Today was tough, I started a little bit out of position,” Alonso said. “I played a really good round on the back nine and I’m happy for that and at least I have the opportunity to try to win the tournament.

“It was really windy, but it is a good challenge. It’s good to play in this kind of weather because we’re learning more about our game and we will keep going and see what happens.

“Everybody here in Ireland is really nice. When they have Leona [Maguire] who is their best player, and the fact they stayed to watch us is fantastic. I always like to play in front of the crowd, for me it motivates me a lot and I have a lot of fun. Thanks to everyone who came out and watched.”

For Folke, who was leader at the halfway stage, it was a trickier round on day three as she shot a 74 (+2) but she still enjoyed herself.

She said: “I played really solidly, I struggled a little bit towards the end with a few mistakes and then I hit it to the wrong spots a few times, but I really enjoyed it. I had a great time out there. It was my first time playing in the final group, it was so much fun playing in front of the crowds.”

Six players are just two shots off the lead in a share of eighth place at the end of the third round including home favourite Leona Maguire, who fired the best round of the day with a 65 (-7) to move to nine-under-par.

“I didn’t get off to the best start again today, but a good par save on eight and a birdie on nine gave me some good momentum heading into the back nine and that chip in on 12 was the first bit of luck I’ve gotten all week,” said the Solheim Cup star.

“That changed everything and then I had some nice birdies coming in and that eagle on 16 coming in was a bit of a bonus. The goal today was to go out and try and shoot as low as possible, especially on the back nine and I wanted to give the crowd something to cheer about.

“It’s been fantastic. There’s been so many people out to watch and you just want to give them something to cheer about you’re trying to make as many birdies as you possibly can and hopefully, we can do more of the same tomorrow and there’ll be even more people out. Irish people are the best fans in the world, and they’ve come out in droves this week.”