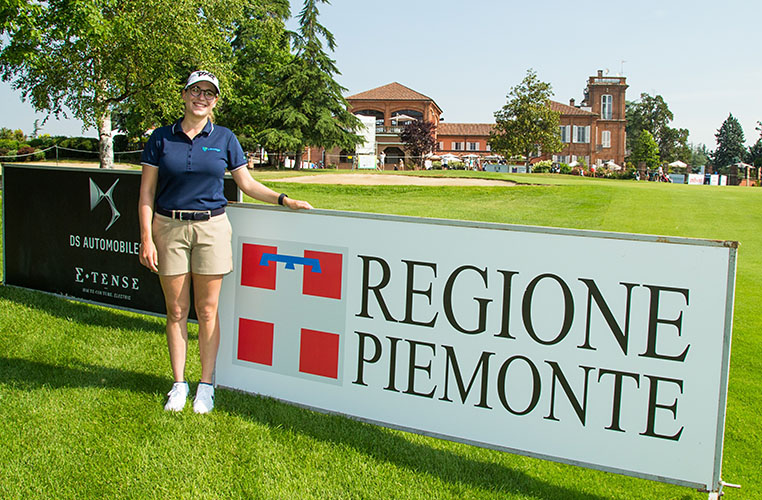 Rising Ladies European Tour star Virginia Elena Carta is relishing the chance to tee it up on home soil when she contests the Ladies Italian Open presented by Regione Piemonte, which starts tomorrow at Golf Club Margara.

The tournament returns to Golf Club Margara for a second successive year as part of the record-breaking LET schedule and Carta, who is now in her second year on Tour, will be one to watch.

The 26-year-old from Milan feels a connection to the venue where she made her professional debut last year and she also attended Middle School in Piedmont. She said: “It’s definitely great to be back home and it’s a privilege to be playing on the Ladies European Tour and at Margara Golf Club in the Ladies Italian Open presented by Regione Piemonte. It’s lovely to come back. My professional debut was here last year so I have so many emotions going on and I can’t wait to get started tomorrow.”

Since last year, Carta has posted five top-20 finishes on the LET and currently sits 33rd on the Race to Costa del Sol Rankings. She added: “it’s just exciting to be back. Regione Piemonte is the European Region of Sport 2022 and hosted the Italian Disabled – Sanofi Open just a few days ago, so it’s great to be able to play the Ladies Italian Open here in this beautiful area.”

There will be 11 Italian players in the field. Carta will be joined by fellow professionals Roberta Liti (seventh and the best Italian in 2021), Stefania Croce (former LPGA Tour player who finished second in a Major, after a play-off with Juli Inkster in the 2000 LPGA Championship), Erika De Martini and Martina Flori. The six amateurs include local player Caterina Don, who played in the first edition of the Augusta National Women’s Amateur), Benedetta Moresco (fourth this year at the Augusta National Women’s Amateur), Carolina Melgrati (who finished 10th in the Ladies Italian Open in 2021) , Francesca Fiorellini (budding talent who this year has already won the Portuguese International Ladies Amateur and was a member of the victorious 2021 European PING Junior Solheim Cup team), Alessandra Fanali and Clara Manzalini. In 25 editions, so far no Italian has managed to win this tournament, but four second places have been recorded, by Silvia Cavalleri (2000 and 2002), Veronica Zorzi (2005) and Giulia Sergas (2011) so Carta will have plenty of support behind her.

With last year’s champion, Lucie Malchirand from France, having withdrawn earlier this week with a back injury, the field of competitors is wide open. Half of the current ten best players on the Race to Costa del Sol will compete, including Johanna Gustavsson from Sweden (ranked second), Tiia Koivisto from Finland (ranked sixth, having won the Jabra Ladies Open a fortnight ago) , the Investec South African Women’s Open champion Lee-Anne Pace (seventh), Englishwoman Meghan MacLaren (eighth), who won the Australian Women’s Classic Bonville and Spain’s Ana Pelaez (ninth), who won the Comunidad de Madrid Ladies Open.

Finland’s Ursula Wikstrom and England’s Gabriella Cowley, who were joint runners-up at La Margara in 2021, are both keen to build on their success to earn their first titles on the LET.

Wikstrom said: “I like the course; some of the greens are really challenging, they’re going to be tricky with the pin placements, but the course is in excellent shape, everything is really green and pure, I think it’s going to be a really nice week.

“For me this has been a bit of a frustrating start to the season, it feels like things are going okay, I’m hitting the ball okay but I’m just not scoring really well, so hopefully things will start to click a bit better soon.

“It’s hard to practice in Finland at the start of the season because things are so cold and even if you want to work on the greens you can’t because there isn’t any grass there so we have to practice indoors.

“It’s so good to see there are so many good Finnish golfers at the moment, it was so nice to see Tiia winning in France and Matilda Castren has been playing well in the US, there are even more coming up as well and it’s great.”

Cowley said: “I’m looking forward to playing this week, it’s good to come back here after finishing second last year, and hopefully it’s a good week and I go one better this year.

“I hit a bit of a fade and I think a lot of the holes suit that, so it’s quite good on the eye so I’m really looking forward to this week.

“I’ve been playing well this year, I’ve changed coach and been working on that. I’ve been swinging it good, I had a tie for tenth last week in Belgium, which was good, so it’s definitely trending.”