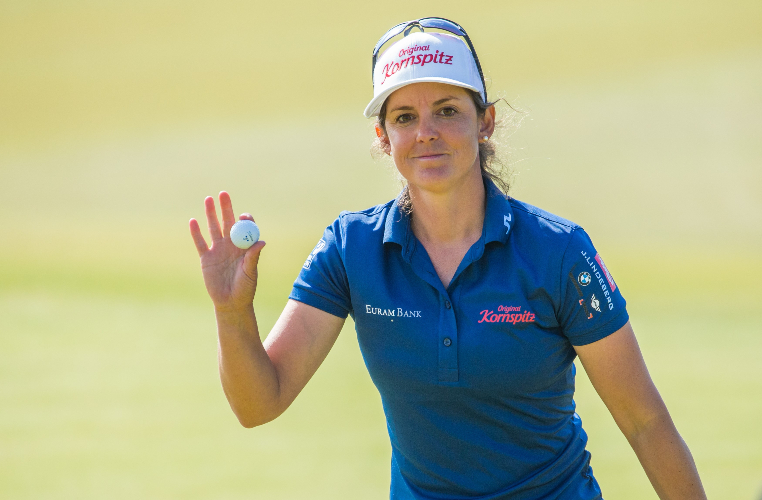 Austria’s Christine Wolf and England’s Sam Horsfield are tied at the top of the leaderboard on the opening day of the Scandinavian Mixed at Vallda Golf and Country Club.

Wolf, who won the 2019 Hero Women’s Indian Open, fired an eight-under-par 64 to record the clubhouse lead and soon after she finished, she was joined by Horsfield.

The LET winner produced a flawless round with six birdies and one eagle on her card to put her in a commanding position heading into the second round.

She said: “I started quite well and birdied the first two par-fives that came up and actually hit it quite close on some of the holes but didn’t make any putts on the front nine. Then all of a sudden, I hit it close and towards the end the putter got really hot. It was nice!”

Wolf, who has her mum Andrea on the bag this week, made an eagle on 16 to take a share of the lead before rolling in a birdie on 17 to claim the lead outright.

Speaking about her eagle, she said: “I hit a really nice drive down the middle. My second shot was a bit into the wind, so I wasn’t sure which club and my mum, who is my caddie, said take this one and I hit it to 11m. My putt was slightly downhill towards the end and then as soon as it hit that hill and I thought it is staying on line, just stay long enough and it went in.”

Felicity Johnson is another stroke further back having carded a round of 66 (-6) and is T7 alongside Swedish amateur Vincent Norrman, South African Darren Fichardt and Wales’ Oliver Farr.

The English golfer, who is a two-time LET winner, played with Robert Rock and Justin Walters and was pleased with her opening round.

“I bogeyed the first, I actually hit a really good shot in, but I went over the back,” Johnson said. “If you bogey the first after you hit a good shot, you cannot really complain. It was easy golf out there. The par-fives I was able to reach, I made birdie and I made the most of those. Seven birdies, like everybody I always leave a few out there, but I am really happy with the start to the week.”

Leonie Harm fired in a 67 (-5) including two eagles to be three shots behind the leaders and tied 11th with ten other players.

The German began her 2021 LET season with her best-ever finish coming second at the Investec South African Women’s Open and sits seventh on the Race to Costa del Sol.

Harm, who finished T49 in the US Women’s Open last week, said: “It’s nice to get the eagles, I didn’t particularly go for them. The shots ended up being pretty close and why not try to make the putt. They were both within 10-15 feet. On 10, I made eagle and then on 11, I made a double bogey right after, so in my mind I said that was two nice pars because in the end it is the same. It was so much fun!”

One of those players also on five-under-par after the opening day is Sweden’s Caroline Hedwall, who carded a bogey-free round.

The Solheim Cup stalwart said: “It’s really nice being back in Sweden, I enjoy playing here and it is good weather this week. It was a lot of fun playing with Joost (Luiten) and Pia (Babnik) today – we all played well which helps! I’m just trying to enjoy myself.”