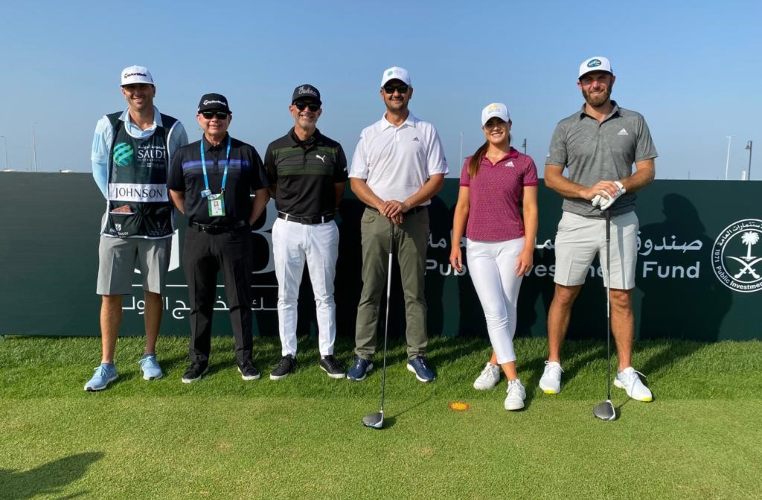 After experiencing a round of golf with the world number one, England’s Annabel Dimmock is ready to put into practice what she’s learnt in the upcoming Ladies European Tour season.

The 24-year-old was invited to take part in the Pro-Am at the Saudi International at the beginning of February and leapt at the chance. Playing alongside world number one Dustin Johnson was an experience Dimmock will never forget and it has given her a boost in confidence ahead of the upcoming season.

“It was honestly the most amazing experience. I was so tired coming off the course for five hours because I felt I was just trying to be a sponge and absorb so much. I had a really good chat with Claude [Harmon III] the whole way down the last few holes, who assured me that my technique is in a place where I don’t need to worry, and I just need to go out and play,” Dimmock said. “He was being so nice and complimentary and I took so much confidence from that. Playing in front of the best player in the world and one of the best coaches in the world and they only had good things to say. I came off the course and felt like I’d won a tournament.”

Trying to take as much information on board was key for Dimmock, who finished 47th on last season’s Race to Costa del Sol.

One key thing Johnson showed her was the ability to move on after playing a bad shot. It’s something she hopes to install in her own game.

Annabel added: “Dustin’s mindset is so chilled and when he steps on the tee it is what it is. He said, ‘If I hit a bad shot, I walk up to it, find it, and just hit the next best shot that I can, and the last shot is gone’. A lot of the time I find when you hit a bad shot, when you step up to the next, you’re still thinking about it and you’re not wanting to hit it again, so you’re thinking what do I do? Whereas he is literally like it’s gone, and it’s done. The next shot is no compensation, that shot is over.”

The countdown is on until the record-breaking LET season begins which sees 27 events in 19 countries, as well as the Solheim Cup and the Summer Olympics, and the launch of the ground-breaking Aramco Team Series with events in New York, Singapore, London and Saudi Arabia.

With a 23-week tournament run from May to October, Dimmock was amazed when she saw the news about the schedule and cannot wait to get going.

“I couldn’t believe it at the start! It is amazing, we’re starting to get some of the recognition we deserve,” she explained. “It’s amazing what Aramco have done, to help our schedule, to help us girls and also to take us to some amazing places. I’ve never played in Singapore and I’ve been to New York but never played there, so I am so excited head there and compete. The prize money is great.”

Dimmock secured her first win on the LET back at the 2019 Jabra Lades Open at Evian Resort Golf Club, which was a dual-ranking event on the LET Access Series and is looking forward to returning this year.

But Dimmock hopes to rediscover her winning form with the opportunity that this season’s tour has to offer.

“I feel the victory was like I renewed my vows with golf,” the 24-year-old explained. “I had struggled for a few years when I first came on tour, I didn’t perform as well as I felt other people expected me to. I found it hard adjusting to a few things on Tour and being away from home. That year and the year before I started to feel more comfortable and started to believe in myself. That is why I’m buzzing that we’ve got run of events because if I have a certain number of events in a row, I know I can start playing well and find form.”

Last year’s Race to Costa del Sol winner Emily Kristine Pedersen has also proved to be a source of inspiration for the Englishwoman, who played alongside her for much of her amateur career.

The duo both competed for Europe at the 2014 Junior Ryder Cup and Dimmock cites the Dane as someone who she bases her own game on and is aiming to replicate Pedersen’s success.

“I think that the Race to Costa del Sol will be one of my main goals. Emily majorly inspired me last season. What she did was incredible, she was fearless and ruthless and every week she looked like she was going to win. I grew up playing golf with Emily as an amateur, we were in the same Junior Ryder Cup team. She’s a very powerful player and I would probably base my game more on someone like her.  To win again is one of my main goals. I won once and I broke the barrier, but I want to prove to people that it wasn’t just a one-off win.”