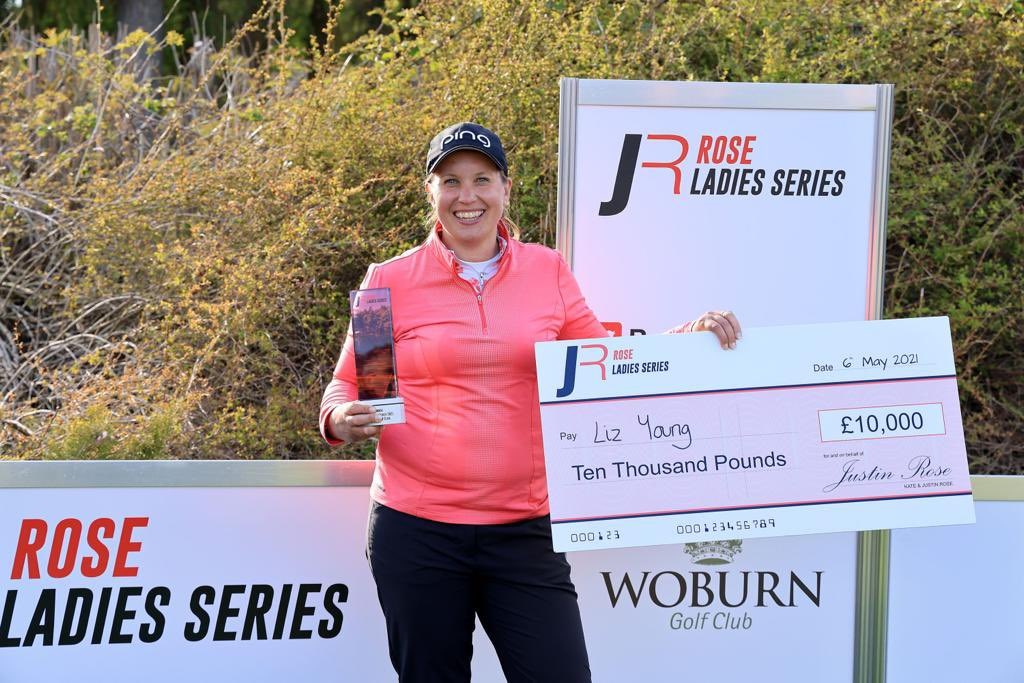 One year after playing an integral part in the start of the Rose Ladies Series, Liz Young clinched her first professional win in the Series at Woburn yesterday.

The LET player finished with a level-par 72 on the Duchess Course and secured a two-shot victory over Meghan MacLaren and Chloe Williams.

Reflecting on the past year, Young said: “It was a dream this time last year when me and my pro at Brokenhurst Manor, Jason, came up with the idea hosting of a one-day event which turned out to be the catalyst for the Rose Ladies Series. The Series last year was incredible and now I’ve got my first professional win within a year!”

In the second event of the 2021 Series, Young reached the turn in 36 after a bogey on the second followed by back-to-back birdies before another bogey on the fifth. Despite dropping a shot on the 14th hole, the LET board member made a birdie on the 17th to ensure she finished at level-par. With so many top players competing, she was unsure when she completed her round if she had done enough.

Back in 2002, Young won the Prince of Wales Trophy as an amateur at Woburn and always loves returning to play golf at the venue, while it was a family affair too for the English golfer with her husband Jonathan on the bag.

Young explained: “When I played the practice round the day before, I knew even-par was going to be a good score around there – it was tough. That was always my goal during the round to keep around even and then I knew I had got a chance. When I finished, I knew I was even-par and leading in the clubhouse, but there were still a lot of girls out there and with golf anything can happen. I love Woburn – it is my favourite course in the country – and I love going back there because my name is on the clubhouse, I just love it! I love everything about the course and it’s always in fantastic condition. It was nice to have Jonathan on the bag because at West Lancs the week before I did make some stupid mistakes and mental errors, and it was just because I was out of competitive practice. It was reassuring to have him there and I just played good golf.”

Young turned professional in 2009 and has played 164 tournaments on the LET with 15 top-ten finishes to her name. Reflecting on making the breakthrough and securing victory, the 38-year-old believes the Series has been great preparation heading into the LET season.

She said: “I don’t know if it’s even sunk in yet! It’s a bit surreal. I’ve been on Tour since 2009, so it’s been a long time coming and I’ve had a lot of fourth and fifth place finishes. To cross the line on a Championship golf course and with a lot of top players playing in it, it builds confidence for the LET season. I’ve been working on the short game area at Brokenhurst Manor and honing those skills, but I haven’t been playing rounds and I haven’t had a card in my hand since November. This Rose Ladies Series is great preparation for the LET. They’re one-day events, it’s 18-holes, a competitive round of golf and you have to play well to win.”

Planning to start her LET season at the end of the month, Young thinks that the work she’s put in over the winter months is starting to pay off and hopes she can triumph on Tour.

Young added: “My goal for the LET is to win, that’s the golden ticket for me this year – that’s what I strive to do. What I’ve been working on in the winter has paid off in the tournaments I have played this year and I just want to show that on the LET. I know I can produce results and I want to take that onto the Tour. Top-ten finishes on the LET are fantastic results, if I can keep doing that and I get the opportunity or I’m in contention, I’ve now won so it might be slightly easier to get that victory because it won’t be my first win.”