Boqvist and Iturrios set for Final Round Duel 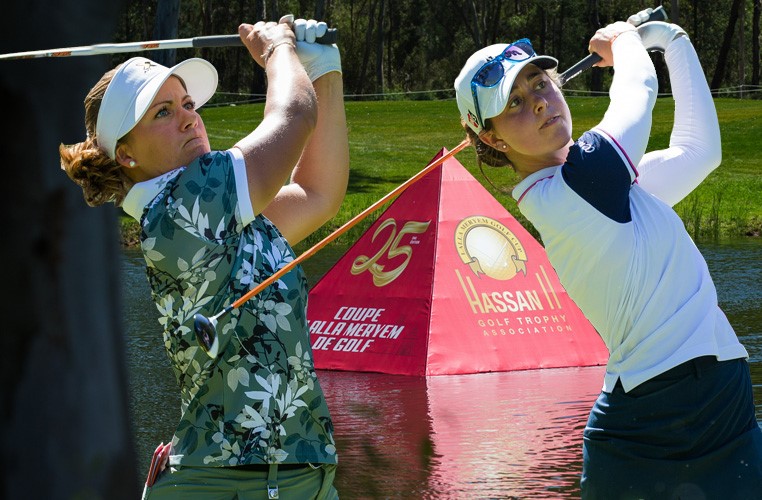 Lina Boqvist and Nuria Iturrios share a seven-shot lead over the rest of the field heading into the final round of the Lalla Meryem Cup in Morocco.

The pair lead on 10-under-par after third rounds of 69 and 70 respectively and the stage is set for an epic final round duel on the Blue Course at Royal Golf Dar Es Salam.

Caroline Hedwall, Hannah Burke and Laura Fuenfstueck, all on three-under-par, are capable of going on a birdie rampage, as are best friends Camilla Lennarth and Marianne Skarpnord, both at two-under-par, but it will take something special to reel in the leaders. Iturrios has the advantage of having won her first Ladies European Tour title in the event at the same venue three years ago and is relishing the match play situation.

Boqvist is looking for her first title. Her best finish on tour was a tie for third in her rookie season in 2015 but she has held firm since leading after the first round, playing on new greens, through high winds on Friday and then in hot weather on Saturday. She won the 2012 Swedish Match Play event as an amateur, the last time she played the format, so seemed to be as fired up as Iturrios.

Boqvist, 27, from Gislaved in Sweden, said: “It was very good out there and I played very solid with four birdies and 14 pars. I had  two up-and-downs from the rough, so it was very good. I only hit nine fairways, but I was in the semi-rough so it was fine. I love the course. It’s my better than last year: the greens are firmer, but it’s a better course now and it’s going to be a fun day tomorrow.”

Iturrios, 24, from Palma de Mallorca, Spain, said: “Lina and I were playing so well and hitting good shots. We are both enjoying playing like that, so let’s see for tomorrow. I just want to focus on my own game. Anyone could win tomorrow, they could shoot seven-under and you never know with golf, so I want to keep working and enjoy it.”

Hedwall shot a final round of nine-under-par 63 to win the Lacoste Ladies Open de France in October last year and could be a threat to the leaders.

After signing for a third round of five-under-par 68, she said: “I was playing really solid today and I created a lot of birdie opportunities. I was happy with my game.

“Compared to yesterday, it was much easier, because the wind blew up yesterday and the greens firmed up so much it was hard to get close to the pin. It was much easier to play today and I took advantage of it. They moved up a couple of holes and the holes were more accessible because the greens were softer. I’ll be looking for as many birdies as possible because to have a shot at the win, that’s going to be needed.”

Final round play gets under way at 8.20am from two tees on Sunday, with the last three-ball containing Boqvist, Iturrios and Hedwall starting their final round at 10.21am.