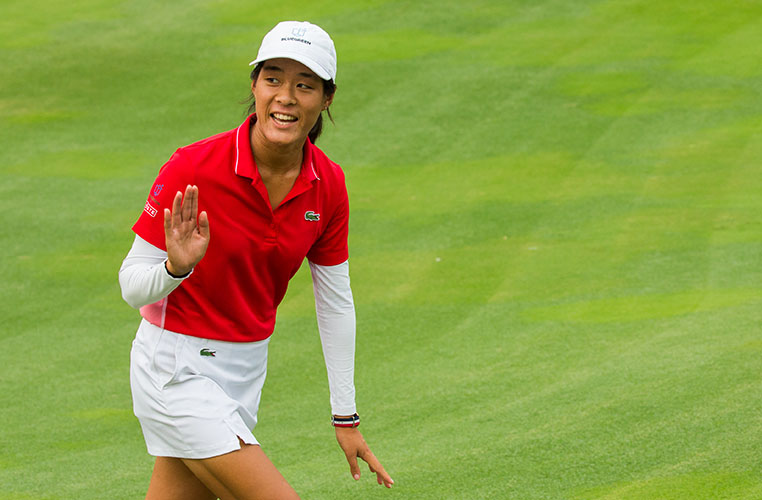 The second major of 2019 is in the books and two-time Ladies European Tour tournament winner and LET member Celine Boutier from France came agonisingly close to capturing the U.S. Women’s Open Championship conducted by the USGA at the Country Club of Charleston.

Playing in the final group of a major championship is a tough proposition for even the most seasoned golfer and Boutier started the final day at the top of the field but finished in a highly creditable tie for fifth place, earning Solheim Cup and Rolex Women’s World Ranking points in her bid to make a debut Solheim Cup appearance for Team Europe at Gleneagles in September.

While the final day’s score, a 75, was not what she expected, she is working to find the positives from a difficult 18 holes.

“I was pretty nervous all day, even in the morning when I wasn’t even on the course,” said Boutier, winner of the 2017 Sanya Ladies Open and 2018 Australian Ladies Classic – Bonville, who became a Rolex First-Time Winner on the LPGA at the 2019 ISPS Handa Vic Open. “Obviously majors are a different situation, but it’s always good to be in this position, for the future.”

LPGA Tour rookie Jeongeun Lee6, 23, from Yongin, Republic of Korea, captured the title and she became the first player in championship history to earn the $1,000,000 winner’s check, became eligible to win the 2019 Rolex ANNIKA Major Award and is projected to move from No. 17 to No. 5 in the Rolex Women’s World Golf Rankings.

Lee6 started the final round at -5, two strokes off the lead, and quickly added to her deficit with a bogey at No. 1. She bounced back with a birdie at No. 2 and as Boutier, Yu Liu, Jaye Marie Green, Mamiko Higa and Lexi Thompson all faltered around her, Lee6 safely parred her way onto the inward nine.

After the turn, Lee6 mounted her charge. She carded back-to-back birdies at holes 11 and 12 and another birdie at No. 15 pulled her three strokes clear of Boutier. Bogeys at holes 15 and 18 opened the door to Boutier, but the Duke University graduate three-putted for double bogey at the home hole, handing the major title to Lee6.

Former Dubai Ladies Classic winner Angel Yin shot a final-round 68 to jump into a tie for second, her best career major finish. She was joined in second by 2011 U.S. Women’s Open champion So Yeon Ryu and leading American Thompson. Thompson started the day one stroke off the lead but struggled to a final-round 2-over 73.

Aside from Boutier, who tied for fifth, England’s Charley Hull and Nanna Koertz Madsen of Denmark  earned Solheim Cup points with their share of 16th place.

Spain’s Carlota Ciganda, a shoe-in for Team Europe, tied for 22nd while LET Rookie Esther Henseleit, who was tied for second after the first day, tied for 30th with fellow German Caroline Masson.

The next major is the KPMG Women’s PGA Championship at Hazeltine National Golf Club in Minnesota on June 17-23, followed by The Evian Championship at Evian Resort Golf Club in France on July 22-28 and then the AIG Women’s British Open at Woburn Golf Club in England on July 29-August 4, where European Solheim Cup points are awarded for top 20 finishes and a win is worth 80 Solheim Cup points. The following week’s Aberdeen Standard Investments Ladies Scottish Open is the final qualification ‘Host Tournament’ for the European Solheim Cup team, where points are awarded for top 10 finishes with a 1.75:1 weighting to the standard points allocation in 2019, meaning that a win is worth 70 Cup points in Scotland.