Buhais all in for four of a kind at Westlake 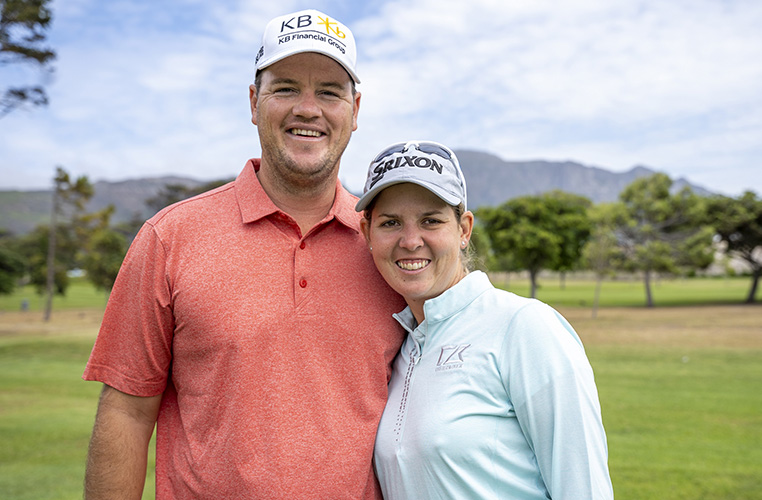 After a stellar start to their 2020 campaign, Ashleigh and David Buhai have arrived in Cape Town targeting a fourth Investec South African Women’s Open crown this week.

The €200,000 event, co-sanctioned between the Sunshine Ladies Tour, the Ladies European Tour and the Women’s PGA of South Africa, tees off at Westlake Golf Club from 12-14 March.

Unless you missed the part where she married her bagman David in December 2016 and you’re still wondering what in the world happened to Ashleigh Simon.

Ashleigh’s storied amateur career was nothing short of outstanding. Not only did she dominate the local amateur golf scene and distinguished herself on the international stage, but she won four professional events as an amateur, including the 2004 SA Women’s Open at the age of 14 and the SA Women’s Masters at age 16.

The youngest champion and only amateur to achieve this feat in both flagship events, she claimed her second SA Women’s Open title in 2007 – also as an amateur – and expectations were huge when she joined the paid ranks in June that same year.

Within three starts, she broke her duck on the Ladies European Tour – at the Catalonia Ladies Masters – and won again in 2011, at the Portugal Open. After a couple of injury plagued seasons, Ashleigh relaunched her career with three successive victories in the Sunshine Ladies Tour’s first season in 2014 and won her third LET title in the 2018 Investec SA Women’s Open.

And she kept adding to the tally, pushing it to 11 last week with a five-shot victory in the Jabra Ladies Classic. The commanding win at Glendower Golf Club after rounds of 63, 69 and 67 was on the cards after her most successful season on the LPGA Tour last year.

She finished 56th on the final Race to CME Globe and 51st on the official LPGA Money List. A top five finish in the AIG British Women’s Open also earned her an impressive 22nd place finish on the final Ladies European Tour Order of Merit.

And, thanks to a top 13 finish in the ISPS Handa Women’s Australian Open three weeks ago, she has moved to 103rd in the Rolex Women’s Golf Ranking.

“I keep an eye on the rankings and the numbers, but really, all I want to do is go out there and play good golf,” said Buhai after the win at Glendower.

“I have had some really bad breaks and some great successes. It’s crazy how things happen in life, but when you choose sport as a career, you have to accept the good and the bad. It’s just the way it is. I’m very positive and I’m very relaxed and it’s a good combination for me. I finally feel like I can win any week and I’m just going to stay patient and let it happen.”

While campaigning on the LPGA Tour, Ashleigh employs Tanya Patterson, who caddied for Dame Laura Davies for six years and David works for Swede Madelene Sagstrőm, who won the Gainbridge LPGA at Boca Rio in January and is currently second on the Money List.

But back on home soil, when David picks up the bag for Ashleigh, good things tend to happen.

“We split up on the golf course when we got married, because we want to stay married,” Ashleigh jokes. “Seriously though, we decided together that it wasn’t fair on me to carry all the pressure and this way our finances are not only dependent on my results. It’s worked out brilliantly for us, but when we get home, I get to have him back on the bag.

“Dave has shared in 10 of my 11 wins here at home, including the Investec SA Women’s Open in 2018. He knows my game inside out and he knows just what to say and when. It’s always special to share that winning moment with him.”

Does Ashleigh believe there is another win on the horizon at Westlake?

“I am more experienced, more patient and more relaxed and I believe I am a much better golfer now than a few years ago. My coach and I spent the last few weeks honing a few things and the game feels solid. I am confident starting this week, so yes, I would love to become the first four-time winner of our national Open.

“Yes, it will be in the back of my mind when I tee it up at Westlake on Thursday. I love the course; it really suits my eye and it sets up well for my game. But if the wind blows as hard as it did on Monday, it going to be open season on the trophy.”

The Investec SA Women’s Open tees off on Thursday, 12 March.

The 132-playing field will be cut to 60 and ties after 36 holes and the champion will be crowned on Saturday, 14 March. In addition to the lion’s share of the purse, the winner receives a Winner’s Category exemption on the Ladies European Tour until the end of 2021, starts in two Majors this year – the AIG Women’s British Open and Evian Championship.

At the conclusion of the Investec SA Women’s Open, the winner of the 2020 Investec Order of Merit will also be crowned and receive a bonus prize of R100 000.

Entry to the 2020 event is free, there is ample parking and public catering is available at the clubhouse.