England’s Hannah Burke fired a bogey-free final round of seven under par 64 to come from four shots behind and claim her first Ladies European Tour trophy at the Tipsport Golf Masters in the Czech Republic.

After rounds of 68, 68 and 64 for a total of 200, 13 under par on the par-71 Golf Park Pilsen course, the 27-year-old from Welwyn Garden City finished two strokes clear of overnight co-leader Nicole Broch Larsen of Denmark.

Fellow second round leader Becky Morgan from Wales dropped into a share of third position with Sweden’s Lina Boqvist on 10 under par.

Broch Larsen was two strokes clear after three birdies in her first seven holes but collapsed with a triple bogey seven on the par four 16th and couldn’t recover, making par on the last two holes.

Burke set the target and enjoyed a wait in the baking sunshine on the club’s courtyard terrace before learning of her victory and was then drenched in beer from the nearby Pilsner Urquell brewery by her friends. 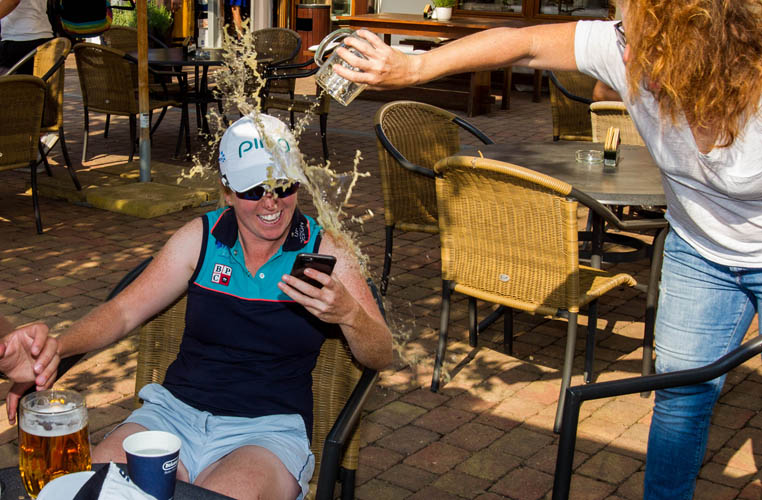 “I’m absolutely lost for words. I didn’t really focus too much on winning. I had a little goal set each day and went out to achieve them and I’ve come out on top, so it feels good,” said Burke, a fourth year member of the Ladies European Tour, who had finished second twice previously, in Scotland in 2013 and in India last year.

“I missed my goal yesterday, because I double bogeyed the last, but it was to have no bogeys in 18 holes. That’s what my coach set me as well, for my caddie. Today I had seven birdies and no bogeys so I managed my goal. I played very consistent. I only missed one green and putted well. Seven birdies is a good way to get on top.”

Second year Ladies European Tour member Broch Larsen, 22, seemed to be cruising until it came to the 16th, where she hit her tee shot into the left fairway bunker. From there, she put her second into thick rough right of the green and then chipped over the narrow green, before taking two more chips and two putts to get down.

“I was going for making my par instead of just playing it out to the fairway and seeing if I could make four from there. Instead of five I made seven and pars from there so it was just one hole,” said a tearful Broch Larsen after a final round of 70.

Morgan tied for third after a level par 71. She said: “When you’re tied for the lead going into the last round you’d like to win but I played okay. I had three stupid three putts on the back nine, got a little indecisive with a few clubs and left myself a couple of tough first putts but all in all I’m pretty happy with it. I just didn’t putt as well as the first day.”

Boqvist, who had a final round of 67, was thrilled with her career best finish. She said: “It’s my best place ever on the LET and it’s my first year so very good. I finished second here last year on the LETAS with a final round of five under so it was good.”

With a tie for fifth place on nine under par, Melissa Reid moved into fourth place on the European Solheim Cup team points list in the final Ladies European Tour qualification tournament and booked her place in The 2015 Solheim Cup at Golf Club St. Leon-Rot in Germany.

Captain Carin Koch will complete her line-up to take on the United States from September 18-20 when she names the next four automatic qualifiers from the Rolex Women’s World Rankings and her four wildcard picks on August 25th.