Carlota’s Way: Ciganda Shelters an Ocean Away from her family 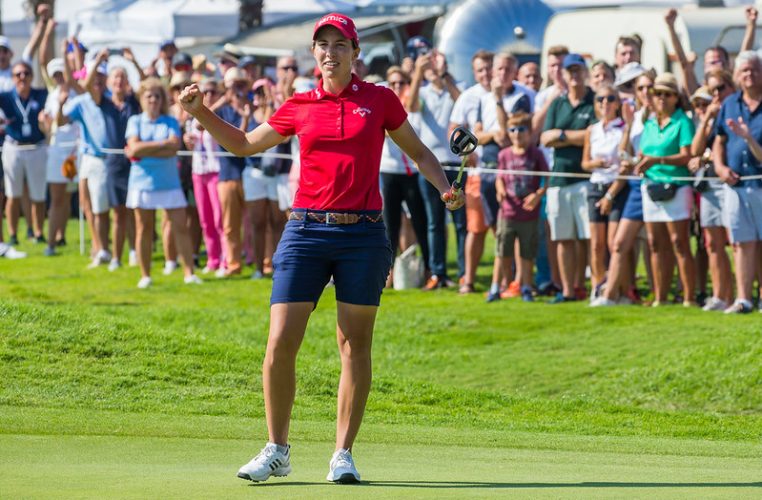 Like many of us, Carlota Ciganda’s contact with loved ones is limited by COVID-19 to virtual hugs and electronic embraces. Hers stretch 5,600 miles across a continent and an ocean from Arizona to Spain. While Carlota can still play golf in Scottsdale, where she lives, her parents – Jesus and Maria – are at the family home near Pamplona, obeying more extreme social distancing rules.

Like most of us, Ciganda tries to maintain some measure of normalcy —in her case playing, practicing and working out. But, like the rest of us, she also finds herself with extra hours – free time that must be filled – which she occupies by adding new pursuits and expanding old passions.

Like all of us, Carlota yearns to get back to doing what she does – in her case pursuing an extremely successful career on the LPGA Tour and LET that currently has her at No. 15 in the Rolex Rankings.

“I am in Scottsdale with James [Longman, her boyfriend, who is from England],” she said in a WhatsApp chat. “We didn’t go back to Europe.”

This was likely a fortuitous move given travel restrictions to and from Spain, which has been especially hard hit by coronavirus, and Britain.

“Our families are doing good,” she said. “It is hard to stay far from them during these times, but we speak to them a lot and they are healthy.”

Ciganda came to the desert to play college golf at Arizona State, which won the NCAA title in 2009, her freshman year. In 2009-10, she became the first woman to win consecutive PAC 10 individual titles. Phoenix is a long way from where Carlota grew up, a distance that seems anything but social right now.

“My parents live in a small village called Larráinzar, just 20 minutes north of Pamplona,” Ciganda said. “It is very rural and there have not been many cases there. They have been in a total lockdown for two months, but they have a garden around the house and they have been walking there. My mum has walked 12km (about seven miles) each day around the perimeter of the garden.”

Ciganda played only once in 2020 before the suspension, finishing T-15 in the Gainbridge LPGA at Boca Rio in January. For four years she’s been one of the most consistent players on Tour, winning twice in 2016 and racking up 31 top-10s in 96 starts, including five of the last 10 majors. She’s been doing all she can to keep those skills sharp.

“In Arizona, the courses are still open and yes, I have been able to practice and play a bit at Superstition Mountain Golf & Country Club,” she said. “I have been going to the course two or three days a week and doing some workouts outside and practicing/playing.”

And then there are all those other free hours the current climate has served up.

“On Monday, Wednesday (and) Friday I have been just playing some pickeball, doing some reading/writing, improving the cooking skills, making some Spanish dishes like paella, croquettes and red peppers,” she said.

“I’m getting good now!!!” she added, her enthusiasm jumping out of the text message on a springboard of multiple exclamation points.

Carlota capped 2019 in style. In September, she had a crucial 1-up victory over Danielle Kang in the leadoff singles match as Europe rallied to win the closest Solheim Cup ever. She won on the LET the next week and, at the CME Group Tour Championship in November, picked up the $1 million bonus for the season-long Aon Risk/Reward Challenge.

“I want to thank you Andy [Weitz, the chief marketing officer for Aon] and the Aon company for doing this,” Ciganda said at the Tiburon Resort in Naples, Fla. “Thank you for putting the same money for men and women. I’m the winner, but women’s golf is the winner today, the LPGA is the winner.”

With Jesus, Maria and James looking on, Carlota perfectly expressed the meaning of the $1 million bonus in words that seem especially appropriate in the current climate.

“This is something big for me, but for me the value in life, it’s family,” she said, the tears flowing freely. “It’s a lot of money obviously. I’m someone that I love to play golf. I love to compete. I don’t think my life is going to change much. I’m going to be doing the same, because that’s what I love to do.”

Like all of us, Ciganda wants to get back to doing what she loves.

“We just got an email from Mike saying that we will start at the DOW team event in Michigan in mid-July,” she said, referring to Commissioner Mike Whan. “I think Mike and his team are doing a great job during these tough times.”

And like all of us, Ciganda wants to get back to work. In her case, it’s once again placing her name in its familiar place on the leaderboard going into Sunday’s final round, looking to create some social distance from the rest of the field and yearning for the day when the hugs are not virtual.