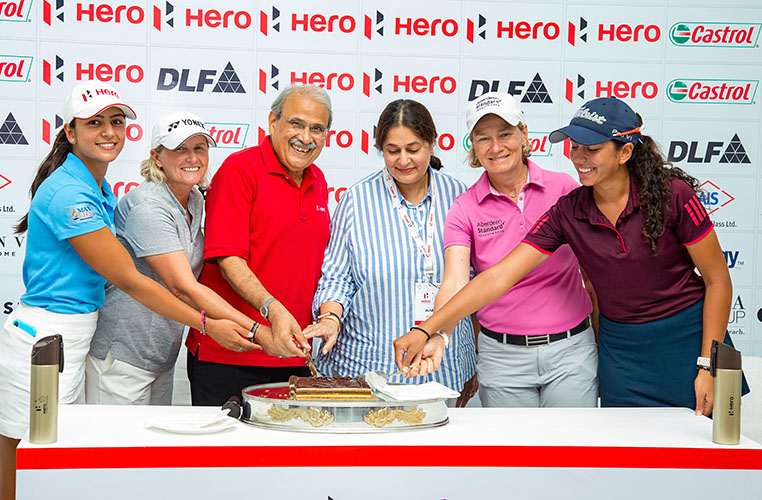 This week, the Ladies European Tour is thrilled to be celebrating 10 years of involvement in the Hero Women’s Indian Open, alongside title sponsor Hero MotoCorp Ltd and the Women’s Golf Association of India.

Now in its 13th year overall, the purse for the 72-hole event has grown to US$500,000 – a rise of 500% from its inaugural year in 2007 – the ultimate proof of the rapid strides made by Women’s Professional Golf in India. There is now four days’ of live international television coverage and it attracts the very best of talent from across the globe with an equal split of players from Europe and India.

The tournament offers an opportunity for talented young Indian women golfers to test their skills against some of their overseas counterparts and has already played a part in the development of home grown talents such as Olympian Aditi Ashok, who was the first Indian to win on the Ladies European Tour when she claimed the title in 2016 and also Diksha Dagar, the leading amateur that year who went on to win this year’s Investec South African Women’s Open as a rookie professional.

In terms of the golf course, the Gary Player-designed DLF Golf and Country Club offers a venue to match the event’s status as one of the finest and most challenging in the world.

The work of the team at the Women’s Golf Association of India, guided by President, Mrs Kavita Singh, cannot be underestimated and nor can the long-term support of Dr Pawan Munjal, Chairman, Managing Director & CEO of Hero MotoCorp Ltd, who has been the driving force behind the development of women’s golf in the country.

Speaking at a press conference on Tuesday, Mr J Narain, Hero MotoCorp, welcomed the players to India and commented: “This is the 10th year of Hero’s association as title sponsor and the 10th year of the LET’s association with this tournament. Hero has been at the forefront of sports sponsorship in India and we are all very proud of where Indian golf stands today. We have players in all corners of the globe.”

The biggest professional women’s golf event in the country welcomes 120 women golfers from 29 countries and Mr Narain and Mrs Singh were joined in a press conference by a number of marquee names.

Mr Narain added: “It is my pleasure to welcome a special guest, the architect of the sensational Solheim Cup win at Gleneagles: Catriona Matthew, who is here in India for the first time. We also have two past champions, Camille Chevalier and Becky Morgan, who will defend the wonderful trophy. They won’t have it easy, because we have some very good Indian players. Diksha Dagar has been performing very well on the LET circuit, then we have Vani Kapoor and a few more players who will give them a tough time.”

Mrs Kavita Singh commented: “I want all the players to appreciate that this would not have been possible without Dr Munjal’s total dedication to women’s golf. To raise the prize fund from $300,000 to $500,000: that’s a huge amount in this country. Golf has always been seen as a rich man’s sport so it’s at the bottom of the ladder in terms of funding and very rare that it will get any government funding. It is through the hard work of all the team.

“The journey has been long over the last 13 years and a tough ride, but believe me, I always believed and I do this for the passion and pure satisfaction of seeing the Indian girls doing well. I hope we do well in the Olympics and come in the top three, if not next year (in Tokyo) then after that. I do have faith. Also, I can see the tour has grown now to 33-34 girls from 3-4 and we are just 13 years old, so I think we have taken great steps.

“It’s an expensive game for a country like India and unfortunately we do not have courses all over the country which are available for the girls to play. In Japan and America, they are hitting into nets off buildings. In tier 2 cities we do not have that, but probably in five years, or if not earlier, there will be 100 (female) pros).”

The tournament plays a societal role in inspiring local players to pursue their talents and the WGAI order of merit leader, Gaurika Bishnoi and LET rookie Tvesa Malik, explained how they both came to work as scorers, before they played in the tournament.

“Laura Davies used to come and give the clinics and it was great to see our idols,” said Bishnoi. “It’s been a long journey from walking the course and putting in the scores to playing in it,” she added.

“To see the journey from volunteering to playing in the tournament has been amazing,” commented Malik.

A strong commitment to the development of young players is also visible through the variety of off-course activities and a third annual achievers’ camp has been organised by the LET this year, in tandem with the WGAI and The R&A.