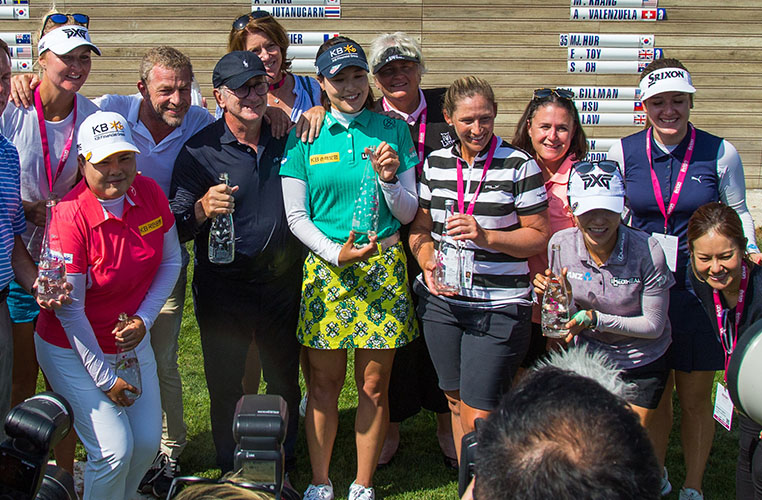 Franck Riboud and Jacques Bungert gave an emotional press conference on Wednesday and celebrated the 25th anniversary of the Evian Championship, formerly the Evian Masters (from 1994-2012), in the presence of the media and past champions whom had gathered at Evian Resort Golf Club.

While there has been a greater effort to showcase female athletes this summer through more live women’s football, tennis and netball, Riboud and Bungert have been amongst the most important supporters of women’s sport, helping to turn up the volume on women’s golf and alter perceptions for a quarter of a century.

Tournament chairman Riboud commented: “Today it’s very fashionable, especially after the Ladies’ Soccer World Cup, ladies’ sports. Now you go back 25 years ago, we were going to do a huge ladies’ golf tournament in France. Where in France? In Paris? No, no, in Evian. Where? In Evian. Ah, not the water? There is a town? And that was so true, that nobody wanted to help us to create the tournament.

“I asked many organisations, and the first thing they told us is, ‘Ah, it’s a ladies’ tournament? No, you don’t need this prize money. You use the prize money like this. You can pay a lot of fees. That was the ambience when we started. Nobody trusted us.

“Except somebody we never speak about, because at this time there was a very big tournament in Europe called the Hennessy Cup, but because of law, French law, they were no longer allowed because of anti-alcohol law. They had to quit the country, and they did it in Germany.

“The second person I have to think about is — okay, there is more than one I have to think about — which is my father, (Antoine), because he was the very beginning. But not far behind there was a very nice lady called Valerie Panard at this time. She was 22 years old. She had just come back from the U.S. university. She was in the French golf team. My father was at the head of the company at this time and he said, we need a golf director in Evian. He chose her. Now you start to imagine the creativity of this guy and the relationship he could create with people.

“Obviously that started to explain to us that we had to do a tournament. We started with a men’s Pro-Am, with French professionals, who were middle of the road (don’t repeat that). That was not so good. The year after, we did the same with the ladies, and Valerie called all her friends, and we were surprised to have the cream of the ladies’ tour, including Valerie Michaud and Sandrine Mendiburu, which changed a little bit my personal life, I have to say.

“My father said, ‘Ah, that’s what we have to do’ – and it’s fitting with the Evian brand, too. And the people who played with the ladies’ (in the Pro-Am) could benchmark their scores. Now it’s changed. I played with Maria Fassi today and I needed a few shots to reach where she is (on the fairway) It’s a new generation. At that time, it was very close to the amateur game, so that’s the reason why I’m so emotional in watching this movie (celebrating 25 years) and I hope we will celebrate 50.”

Riboud explained that the vision was to innovate but also to create an ecosystem for the development of female golfers, epitomised by Pauline Roussin-Bouchard, the amateur who qualified to play in the Evian Championship this year by finishing second behind Annabel Dimmock in the Jabra Ladies Open two months ago.

He said: “Pauline is exactly what we wanted to build from the beginning. I mean, a young kid playing three times the Haribo Kids Cup here, for under-12s. Being qualified to play the Junior Cup means she’s a member of the Evian Resort Golf Club. At this club, you have Jordan Spieth, you have Justin Thomas.

“Pauline was not given a wild card, no. She got the spot because she finished second at the Jabra tournament. So the three Haribo Kids Cups, the Junior Cup, the Jabra tournament, and now the Evian Championship. That was the exact story we planned to build with all these tournaments and so on and what we are doing for the younger generation.”

Riboud felt that his father would have been “more than proud” of what the Evian Championship has become today.

“He loved golf. Even at the beginning, he was the guy who decided to do this tournament. He was really involved in golf. He was involved in the club in Lyon. So the only thing that’s a really personal emotion, as you know, I have a son. I have four kids, but I have one who’s playing golf quite well. I am sad that my father was not there to see his grandson playing golf. He saw the other one playing soccer so that was okay, but golf was special for him.”

He explained that the family atmosphere and spirit is an essential culture of the event, on which he will not compromise.

“We keep this proximity with everybody in this tournament. I remember when we began as a major. A lot of people thought that is would be the end of the ambience, that is the end of the family spirit of the tournament. We succeeded to keep it.”

Riboud has offered a wildcard to the winner of the Augusta National Women’s Amateur and he is always looking, slowly, to the future. He added: “When I used to be the CEO of the Danone Company the job was to go on roadshows and explain the strategy and the result to the finance community, and I got always the same question as yours: ‘Franck, what is your vision?’ My vision? I am just reacting the most positively I can to all the difficulty I have every day.

“Having an idea of what you want to build, how you want to manage, respect the people, what kind of role, what kind of sense. And it was not in the movie, but I said that. Because 25 years is very long. It’s true that if you look at the big tournaments, the English ones or whatever, the U.S. ones, it’s nothing. But it’s long for two guys. Without Jacques I would never do that.

“So I think we will continue, with Jacques, rather than with myself, because I will have passed away.”