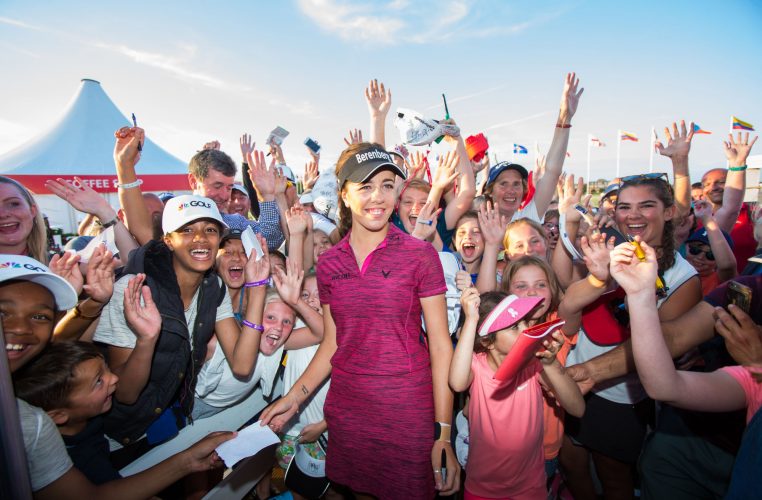 to compete for the 43rd Championship at Woburn

English star Georgia Hall will be in good company when she looks to mount a successful title defence at the AIG Women’s British Open at Woburn, 1- 4th August 2019.

Nine of the previous ten winners of the Championship have confirmed they will be in the field, competing to re-claim their title, in AIG’s inaugural year as the title sponsor of the Women’s British Open.

Hall’s historic win at Royal Lytham & St Annes last year will be tough to match for drama as the then 22-year-old from Bournemouth showed steely nerves to secure her first Major title and become the first Englishwoman to win the Championship since Karen Stupples in 2004.

Hall commented, “I really am looking forward to defending my title at Woburn. As always, it sounds like it will be an amazing field gathered for AIG’s Women’s British Open. When I learned that nine past champions are in the field, I thought ‘that’s going to be tough.’ And then it hit me that I am actually one of them. I missed the cut at Woburn in 2016 with a pair of 77s, so I definitely think I can improve on that. Hopefully I can get myself into contention come Sunday afternoon.”

The 2017 Champion, In Kyung Kim, who won at Kingsbarns, avenging the demons of the Major that got away in 2012, when she missed a one-foot putt to win at the Kraft Nabisco Championship, will return to Woburn for a second time.

World No 4 Ariya Jutanugarn, who took the title in 2016 when the Championship was last played at Woburn, returns to the Marquess’ course where she won by three shots over Mo Martin and Mirim Lee.

Former World Number One Inbee Park, who won in 2015 at Trump Turnberry, owns a remarkable seven Major titles along with 19 LPGA wins and, playing a full schedule for the first time in several years, is playing her way into impressive form as the season progresses.

Crowd favourite Mo Martin, champion in 2014 at Royal Birkdale, will make her return, finally free from injury while Stacy Lewis, who triumphed in 2013 at the Old Course, St Andrews, is finding her game having recently returned from maternity leave.

The popular Jiyai Shin (2008 and 2012) has also confirmed she will return, despite having given up her LPGA membership in order to play closer to home.

This year’s European Solheim Cup Captain, Catriona Matthew, who famously won in 2009 at Royal Lytham and St Annes only 11 weeks after giving birth to her second daughter, will be at Woburn not only to compete, but to keep her eye on her European players who will be playing in their penultimate event to qualify for the biennial match to be played at Gleneagles in September.

Following AIG’s recent commitment to a five-year sponsorship through to 2023, excitement is building as the Championship enters a new era.

Woburn has hosted the Championship on ten occasions, the first nine of which were on the Duke’s Course, while the 2016 Ricoh Women’s British Open was played on the Marquess’ Course to great acclaim from the 144-strong field of world-class players.

The Women’s British Open was founded by the LGU in 1976 and is staged in conjunction with IMG, the world’s largest sports marketing company, since 1984. The event has been co-sanctioned by the LPGA and LET since 1994 and gained Major status in 2001. The Championship is now owned by The R&A.