Confident Cowan opens up about Life on Tour 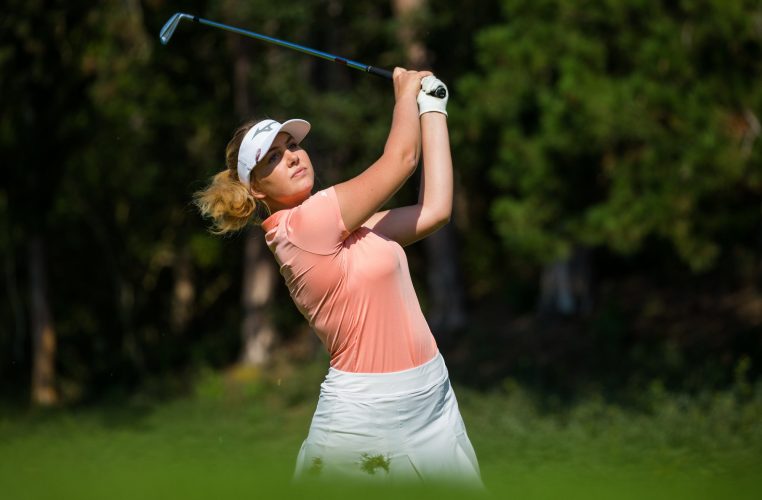 Born in Homburg, Germany, 23-year-old Olivia has set herself a couple of goals for this season: a) Get the monkey off her back and pick up her first LET win and b) Earn her LPGA Tour Card at the Qualifiers later this year.

Coached by her father Andrew Cowan who is also a teaching professional, Olivia is eager and confident of clocking her best Ladies European Tour (LET) round yet en route to her maiden win.

As she fights it out on the course this weekend among the 138 strong field, including 14 LET winners and 31 LETAS winners, we caught up with Olivia and talked about the various aspects of her game ranging from her introduction to the sport to what is it like being on the road, the friendships on Tour and much more. Here are the excerpts from the conversation:

Q: How did you get introduced to the game?

A: My dad is a teaching professional. So, I basically started because of him and my entire family played golf. My brother, mum and dad and my grandparents, everyone plays golf in the family. I started when I was three years old.

Q: Is it because of your grandparents’ interest in golf that your father picked it up too and later on you followed suit?

A: Well, my grandparents, they didn’t play golf. They were very much into tennis. So my dad actually played tennis and at a good level, as well. When he was 15, he decided that he wanted to pick up the game of golf because his grandfather played golf.

Q: So that makes you the fourth generation in the family who’s playing golf?

Q: Talking of fourth, it’s been four years since you’ve turned pro. How do you think your career is shaping up so far?

A: It’s good. It’s getting better for me. From year to year, I am playing better. This year has been really good; I have been up close a few times. I had a lot of Top 5s and Top 10s. I am just scraping the surface of almost winning but that’s just one step further that needs to come.

Q: What do you think is the missing chink in your armour to land your maiden win?

A: I just have to be a bit more chilled on the golf course. If I play a bogey, I play a bogey, it’s not the end of the world. I just have to try and get it back, and play a birdie. Sometimes, in recent tournaments, I have just gotten a bit mad when I played a bogey so I just need to stay level-headed, I think.

Q: Being on the Tour is a long journey, what is it that you enjoy the most on Tour? And what do you dislike about being on Tour?

A: I like playing all the tournaments. I like travelling and I like being around my friends here on the Tour. Everyone gets along with everyone, so it’s nice. But, sometimes, I don’t like travelling. Sometimes, I want to be at home for a week.

The flying, you know what every golfer would say, if you had a superpower, you’d just zap yourself anywhere, that would be every golfer’s dream! To not have to be on planes and not have as many travel days. That’s what I would say is a bit annoying.

Q: You mentioned that there’s a lot of camaraderie on the LET, but they are all your competitors every week. How does that work out?

Q: Among the German girls, you are currently second replacement on the Tokyo 2020 Olympic Golf Rankings. It’s less than one year from now until the Tokyo 2020 Summer Olympic Games begin. What do you need to do to make it to the German Olympic contingent?

A: It’s going to be hard. I have got a good chance so I am looking forward to it. I was reserve for the last Olympics at Rio. I was just short of getting in, so that’s definitely one of my goals next year.

Q: During your time away from the Tour, what interests you the most?

A: I just like to meet up with friends and family, and just relax. I don’t like to play golf when I’m at home. If I have been away for a long time, like this now, for four weeks, next week I am not going to touch a golf club. I am just going to relax, have time for myself and not think about golf as much.

Q: What exactly do you do when you say “have time for myself”?

A: I like catching up a lot with my friends. We go out shopping. I do like to go out partying when I am at home. But, during tournaments, I know some people who maybe have a few drinks or a wine but I don’t touch anything when I’m on the road. So, when I am at home, I will go out.

Q: Have you got any superstitions when you play or any strange habit which you would like to share?

A: Yeah, sometimes, they change though. I don’t have one superstition that I always stick to. But If I feel like I am playing really well without my rain-pants and it starts raining, I don’t want to put them on. So, that’s maybe one of those superstitions or sometimes I don’t like to put my rain jacket on because I feel that it’s working without it. Last week, it got a bit cold and I didn’t want to put my rain jacket on, so I just put it on to walk to the ball and took it off when I hit the ball. That’s probably one of the superstitions but they change. I feel like it did work in my favour.

About the habit, the camera guys always come to me and say that they can see on TV I am very focused and very serious, but when they see me off the course, it’s totally different. I think once people get to know me they realise that I am just an easy going person and funny. I don’t take life too seriously. My caddie says he wants me to be mic’d up for one day and the stuff that I say on the golf course is just so funny. Because I am English but I live in Germany. My entire family is English but I was born in Germany. So, some words, I translate from German straight into English but it’s not correct so my caddie always takes it the wrong way. We just laugh about it. He is writing a list with all the weird things I say.

Q: Which is your favourite cuisine?

A: I don’t really have a favourite food. I like a lot of things. Favourite would definitely have to be something with chocolate. I like the Lava Cake where the chocolate is runny inside. I like Italian, anything with pasta but I like Indian food as well.

Q: Which is your favourite travel destination?

A: Dubai. I have my sponsors there, as well – JA Resort and I just love how it is there. I just really like it. The weather is always good.

A: I listen to everything. Calvin Harris is really good, I like him.

A: I like Suits, The White Collar – they are really good series, I really love them. I love going to the cinema. I like Fast & Furious, it’s one of my favourites. I like a lot of Marvel films with Superheroes. I love Captain America. I like the Avengers movies. I think they are good, I like all of them. I can’t really pick a favourite.

Q: Are you a “Netflix and Chill” person or “Let’s go out, partying” person?