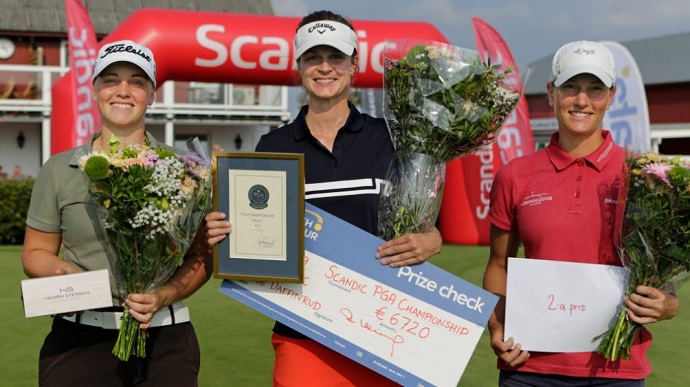 Norway’s Tonje Daffinrud secured her third LET Access Series title with a spectacular come-from-behind victory at the Scandic PGA Championship in Helsingborg. The 27-year-old hit four birdies in the final five holes to storm into the lead, and secure a two-shot triumph on -14 at the stunning Allerum course.

Daffinrud began the day tied for third after an impressive opening 36 holes but found her best form on the final day at the Swedish event with a bogey-free -6 round of 66. The Norwegian reached the midway point on one-under for the day with a birdie on the 130-yard seventh, holing out impressively following a fine short iron from the tee.

Heading into the back nine a few shots adrift of the lead, Daffinrud played scintillating golf as she recorded five birdies to come back in 31 and propel herself into the lead with one of the finest finishes seen on the tour this year. The Norweigian putted superbly throughout the event and rolled in a number of brilliant putts as the momentum gathered in the final stages.

The Tonsberg resident won twice on the LET Access Series in 2014 on her way to earning her LET card for the 2015 season. A best this season of eighth at the Skafto Open before this week, Daffinrud was overjoyed to take home the trophy after a stunning week at the Helsingborg course.

Overnight leaders Johanna Gustavsson and Maja Stark had to settle for a share of second place as the final pairing both shot a closing round of 70 to finish two shots behind Daffinrud. The Swedish pair appeared to be in a shootout for the Scandic crown at the half-way stage but Daffinrud’s breath-taking finish saw the two Swedes fall back in the final holes despite solid -2 rounds for the duo.

Amateur Maja Stark’s appearance in the championship was her second of the season having played last at the Anna Nordqvist Vasteras Open. In both events the Swede has finished in second place and looks at home in the professional ranks.

Experienced compatriot Gustavsson is a former LET Access Series champion, most recently in 2018 at the Ribeira Sacra Patrimonio de la Humanidad International Ladies Open, and has impressed again in 2019. The Swede has eight top-10 finishes in nine events this year and currently lies in the top-20 in the Road to La Largue standings as the end of season event approaches.

In two weeks’ time, the LET Access Series heads to England for the WPGA International Challenge at Stoke by Nayland Hotel Golf & Spa. With just two events to come before the season ending championship at La Largue, the UK event will be crucial to those looking to secure points in the Road to La Largue ahead of the series finale in France.