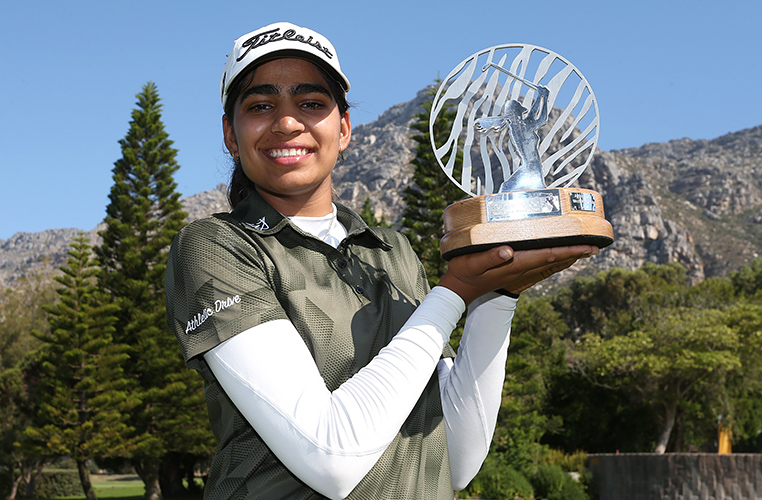 Defending champion Diksha Dagar is eager to recreate the performance that propelled her to instant stardom when she takes up her title defence in the Investec South African Women’s Open from 12-14 March 2020.

The 18-year-old deaf golfer became the youngest Indian woman to win on the distinguished Ladies European Tour with a popular and emotional maiden victory last March.

In a stellar amateur career, during which she won silver at the 2017 Summer Deaflympics and represented India at the 2018 Asian Games, Dagar earned a reputation for her brand of fearless and aggressive golf.

The left-hander entertained the crowds on the final day of the Sunshine Ladies Tour showpiece when she edged out three-time champion Lee-Anne Pace with a three-under-par 69. A one-shot triumph in just her fourth start in the paid ranks was a dream debut for the New Delhi rookie, who is ready to draw on the fond memories of her last visit to Westlake Golf Club as she bids for a second career win.

“The Investec South African Women’s Open is very special to me and will always remain so for the rest of my life, being my first professional win,” Dagar said.“For me, this Ladies European Tour event happens to be the door to a world of golfing opportunities and I would love to come back and play the Westlake golf course. Greetings and best wishes to the sponsors, Investec, the Sunshine Ladies Tour, organisers and everyone associated with the event.”

The Investec South African Women’s Open, established by the Women’s PGA of South Africa (WPGA) in 1988, is the oldest and most prestigious professional women’s golf tournament in South Africa.

Chair of the Women’s PGA of South Africa Margie Whitehouse said: “The Investec South African Women’s Open is our flagship event and the 32nd anniversary coincides with the sixth time we are co-sanctioning this event with the Ladies European Tour.

“We would like to extend our sincere thanks and appreciation once again to Investec for not only their title sponsorship, but also for all they are doing for women’s golf, as well as to the City of Cape Town for their continued support.”

Westlake Golf Club might be a happy hunting ground for Dagar, but following the new joint venture between the Ladies European Tour and LPGA Tour, the stakes have been significantly raised in 2020.

“It’s very exciting to be part of the Investec South African Women’s Open and we are extremely proud to continue our collaboration with the Sunshine Ladies Tour and the WPGA,” said Ladies European Tour Acting CEO Alexandra Armas. “We would like to recognise the important contribution of Investec and the City of Cape Town, whose support is providing a platform that aids the promotion and development of talented women in sport.

“We recently announced a new joint venture partnership with the LPGA and have already seen a dramatic impact on our 2020 schedule – an impact that will benefit all local and international players who compete in LET sanctioned tournaments, allowing them to pursue their dreams through the game of golf.”

Sunshine Tour commissioner Selwyn Nathan believes the collaboration between the Sunshine Ladies Tour, WPGA and the Ladies European Tour significantly elevates the status of the event and golf development in Southern Africa.

“The 2020 champion will not only walk away with the lion’s share of the prize money and Rolex World Golf Ranking points, but will also earn a Tournament Winner’s Category Exemption on the Ladies European Tour for the remainder of the 2020 season and the 2021 season, as well as exemption into the Women’s British Open and the Evian Championship,” Nathan said.

“These incentives befit the status of the WPGA’s flagship event and we sincerely hope that one of our Sunshine Ladies Tour members will step up to the challenge in our season finale to secure a major boost for her career.”

Lesley Copeman from promoters World Sports Promotions commended all the parties involved in elevating the status of the national championship to a world-class event.

“Partnering with the Ladies European Tour ensures that the WPGA and Sunshine Ladies Tour present a world-class championship with the strength of the field through the greater depth of the international players currently competing in Europe,” Copeman said.

“We are very pleased that Investec and the City of Cape Town continue to back our flagship event, taking it from strength to strength. Not only do our South African golf enthusiasts get to watch high quality women’s golf, but we also have the opportunity to showcase Cape Town, one of the best travel destinations in the world, to our international guests.”

City of Cape Town Executive Mayor Dan Plato said the City of Cape Town is delighted that the Investec South African Women’s Open will again be teeing off in the Mother City as part of the Sunshine Ladies Tour.

“As host city and sponsor of the tournament, we are proud to be associated with an event that elevates women in sports. In addition to the professional golfers, this event provides an opportunity to young talented sportswomen to showcase their gifts on an international stage.  We are looking forward to welcoming all the participants to Africa’s Leading Festival and Event Destination.”