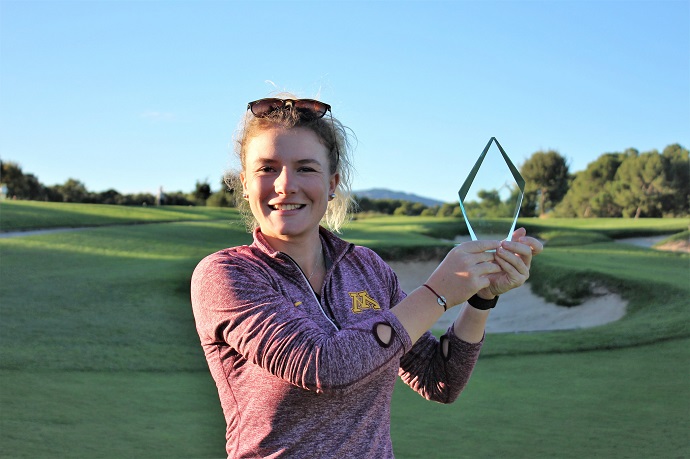 Emie Peronnin from France has won the 2018 Rookie of the Year Award on the LET Access Series after a remarkable breakthrough season which included a first victory at the Anna Nordqvist Västerås Open by SmartProvider in August.

Peronnin sealed the accolade after finishing seventh on the Order of Merit to earn her Ladies European Tour card for the 2019 season.

The 23-year-old from Montlucon in France, who graduated from the University of Minnesota in the United States in 2017 with a degree in Business and Marketing, made gradual progress during her first year as a professional.

Having missed out on the last day at Final Stage Lalla Aicha Tour School last December, she started the season with a modest membership category, but a tied-second place finish in the Lavaux Ladies Open lifted her into the top-20, which improved her status and enabled her to enter all the remaining tournaments on the schedule.

Soon after, she claimed her first title in Sweden, which was completely unexpected, crediting her friend and caddie, Julie Aime, for keeping her calm throughout the final round.

Peronnin said: “I over-achieved my goal this year, because I wanted to finish in the top-20. Of course I wanted to win, but it was just in the back of my mind. This was just my first year so I was working hard with my coach and not expecting to win so quickly.

“I had no idea what to do when I won. I wasn’t striking the ball well in the Pro-Am. I played my game and ended up winning. Golf is funny and can surprise you in the most unexpected way. After winning, I wanted to find a fun way to celebrate so after the next tournament, I went sky diving with a friend in the French Alps.

“LETAS is a great tour, really well run and I think the tour has really helped me grow my game and confidence. I’m definitely going to play in some more LETAS events in 2019 and I hope to see the LETAS team in Terre Blanche.”

The Rookie of the Year award is given to the leading player on the Rankings in their first full year as an LET Access Series member.