Engström and Hewson on their 2020 successes: what’s next for golf’s rising stars?.. 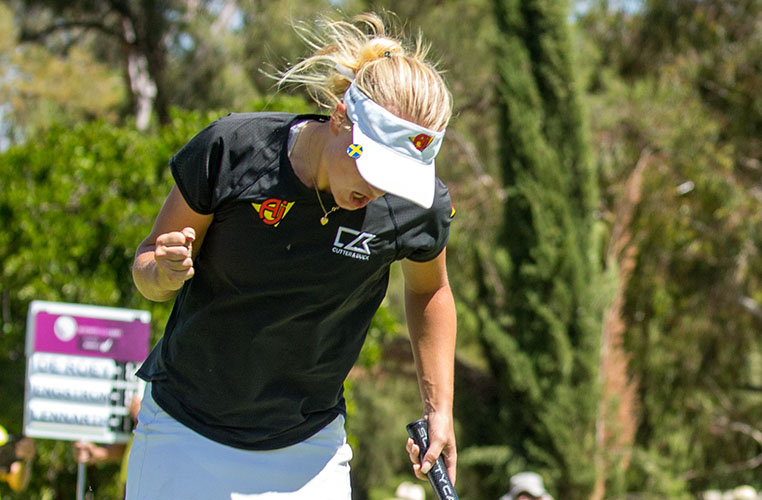 From Halmstad to Berkhamsted, Europe is gripped by the coronavirus. These are the home towns of the last two female golfers who won professional events before sport hit the pause button.

Of course, the situation is changing all the time but as of writing, there is a marked difference in how the most newly crowned Ladies European Tour champions are spending their days.

In the Hertfordshire market town of Berkhamsted, Alice Hewson is in lockdown with her mum and dad and younger sister. Just a week after returning home from the South Africa Open, where she was victorious in her first attempt at playing on the LET, Hewson can no longer put in the practise at Berkhamsted Golf Club, which like all courses in the UK, is closed. Things were already different a week before the lockdown, when she took a victorious lap of honour at the clubhouse on her first visit back; “Ladies Day is a Tuesday and so Tuesday morning I went up and saw them all in the clubhouse and they were all nicely sat two metres apart from each other, having a coffee. They all stood up and clapped.” 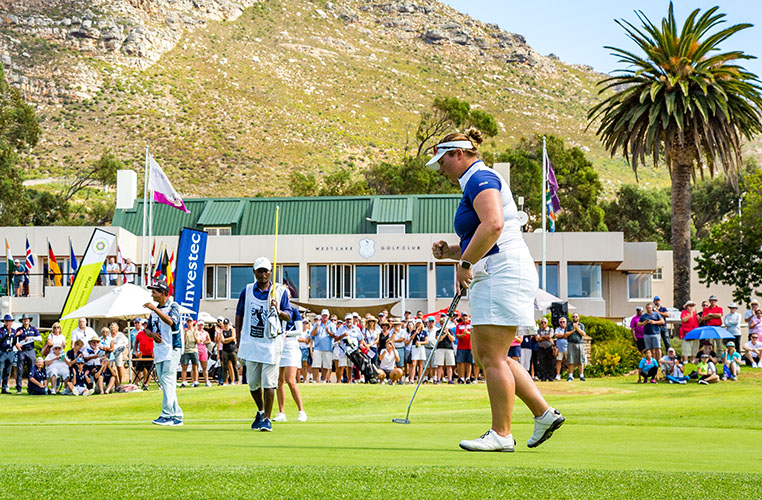 Meanwhile, in southern Sweden, things are as normal as anywhere in Europe. Julia Engström, who turned 19 last week, currently leads the Ladies European Tour Order of Merit; “The golf course is open, as are restaurants and everything like that. I think we are one of the countries where most things are open. It’s a bit different in the evenings as there are not that many people out if you go to restaurants but you are allowed to sit and eat if you want to. All the gyms are open. I think it will stay like that for quite a while but you never know. I think it is different for me than lots of other players.”

When you are 18, you sometimes have to mix winning events with homework but while Engström is able to complete her high school studies online,  Hewson’s 16 year old sister doesn’t know when she will be sitting her GCSEs, if at all. But Alice is planning. It is hard to see the LET returning any time soon and with her local course out of bounds for now, a golf net for the back garden has been ordered; “I think, getting the net will be helpful. My dad might not be happy that I am going to be taking chunks out of his lawn though! I am going to use it as an off season where I can progress my game even further and when we get the green light to go ahead, whenever that be, I am as well prepared as I can be.”

The memories are all we have to cling on to at the moment. And both these talented young ladies have such positive moments to dwell on from early 2020. If you were watching Sky Sports at the end of last year, you may have seen the heart-breaking final round of Engström at the Magical Kenya Ladies Open. The 18 year old held a 7 shot lead going into the final day but weakened by three days of little to no food and drink and let down by her putting stroke, she was overtaken by a charging Esther Henseleit. “I think I got over it on the flight back home. I was just happy that I got to play the round. I woke up on Sunday morning and I literally couldn’t walk out of bed. I was just like, what am I going to do? It was quite hard but I just think I tried not to think about it too much and I think that might have motivated me a bit more during the off season to go out there and like, try to bounce back I guess.”

That’s exactly what she did. A game that has few weaknesses, she put in the work on her putting at the start of the year, “I started working the last few months with Peter Franzen. He’s a teaching professional at my club, as well as my swing coach. He has known me my entire golf life. It has helped for sure.”

So, it seems. Two events after Kenya, Engstrom hit a 5 iron into par three last at Dubbo Golf Club from 192 yards to a matter of inches at the Women’s NSW Open. That birdie saw her win by one shot, having started the day five back. She could have made it back to back wins a few weeks later, contending in South Africa, one of those in a share of the lead going down the stretch. But it was Hewson who emerged as the winner.

Like Engström, Hewson won some of the game’s biggest amateur trophies. Both are modern day golfers, with a swing speed of 104 mph. Compare that to Anne Van Dam, the longest in the women’s game who swings it at 109. Hewson couldn’t afford to go to Australia. She didn’t have the funds as she doesn’t have any sponsors. Her only other pay cheque came when she finished 2nd after turning pro at Access Series event. So, the first prize of 30,000 euros was more than handy, “It’s definitely very important. At least secures some funding to cover half my season now. That’s a good start. It’s much better than where I was before going to South Africa, so that is a positive. Hopefully, there’s still a lot of golf left to play and hopefully I can afford it.”

As well as trying to increase her swing speed in her new nets, Hewson will use the time to try and attract new sponsors and consider a management company. Another pressing concern is that she isn’t sure when she will see her American boyfriend Stephen next, who is still at Clemson University in South Carolina, the college she attended until last summer.

We don’t know when but Hewson will be re-united with her boyfriend. The chances are her 100 per cent record on the LET won’t last but she is safe in the knowledge that she belongs at this level. The early season victories means both Hewson and Engström will have the Evian Championship to look forward to, and with the Olympics put back a year, Engstrom who is currently 3rd reserve for Team Sweden has more opportunity to make the points needed to fulfil one of her big ambitions, “Hopefully I get play in the Olympics. It’s one of my biggest dreams to get a medal for Sweden.”

The coronavirus might have stopped them but the last two female professional golf champions have time and talent on their side to make this a footnote in their careers.