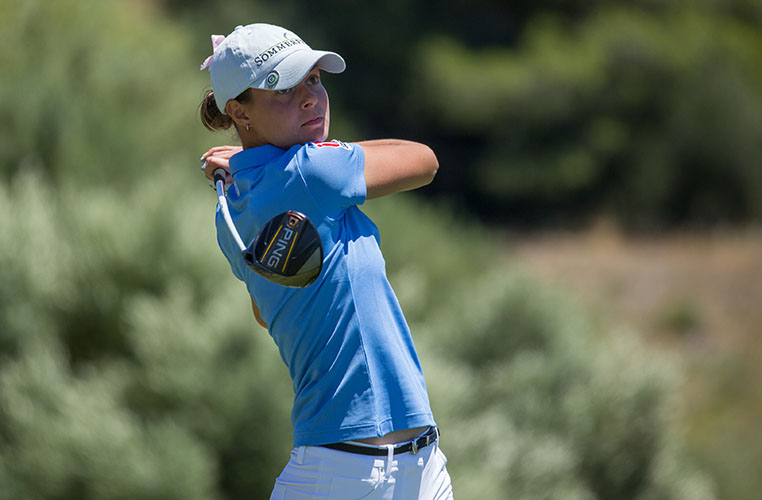 Ladies European Tour rookie Esther Henseleit turned in a bogey-free first-round 66 on Thursday and sits just one stroke off the lead held by Mamiko Higa at the U.S. Women’s Open. Henseleit, a 20-year-old from Varel, Germany, is playing for just the second time on U.S. soil, having competed at the 2017 PING Junior Solheim Cup in Des Moines, Iowa.

“It’s a completely new experience for me to play here, and the grandstands are huge and very many people around, but I don’t feel like that it’s too much for me,” said Henseleit, who is making the first major appearance of her career. “I really like that. I really like to play in front of many people.”

Henseleit was the first alternate from the England sectional qualifying site at LET headquarters, Buckinghamshire Golf Club, falling in a playoff to Hayley Davis. Almost a week later, she received a call that she had been added to the major field. And now, she improbably finds herself in early contention for major glory.

“I never imagined sitting here and doing this well,” said Henseleit. “I don’t feel any pressure because the field is so good, and I just want to do my best and continue my good play from the last week.”

Under sunny skies and temperatures that soared into the mid-90s, JLPGA star Mamiko Higa carded a bogey-free 6-under 65 on Thursday and sits atop the leaderboard after the first round of the 2019 U.S. Women’s Open Championship. The 25-year-old from Tokyo, playing in her first U.S. Women’s Open, tied for the third-lowest single round ever and set the mark for the best debut round in championship history.

“I didn’t expect much here, to come here and play that well,” said Higa, who is the first Japanese player to lead the U.S. Women’s Open after 18 holes since 1993. “I came here on Saturday and since then, I not only golf, but I enjoy the life here. So I’ll keep enjoying it and enjoying it, and just come in to the golf course, and I just enjoyed 18 holes today.”

This is not the first time Higa has enjoyed success at major championships. She tied for seventh in her major debut at the 2013 AIG Women’s British Open, while at the 2018 championship, she was never outside the top five en route to a tie for fourth.

It’s safe to say that Ben Hogan was not a great fan of the Country Club of Charleston’s famed No. 11. When asked his thoughts on the reverse Redan, he said, “what you need for that 11th hole is about five sticks of dynamite.” This week’s U.S. Women’s Open competitors might agree with the 64-time PGA Tour winner, as the vaunted hole has been the topic of much discussion and trepidation.

The hole certainly lived up to its reputation in Thursday’s first round, though a few players enjoyed success there. Jeongeun Lee hit a beautiful shot that rolled to just a foot shy of the hole, leading to a tap-in birdie. It was one of just 10 birdies on the day at No. 11, which also yielded 66 bogeys and nine double bogeys. It was the toughest hole on the course at 3.4744, nearly half a stroke over par.