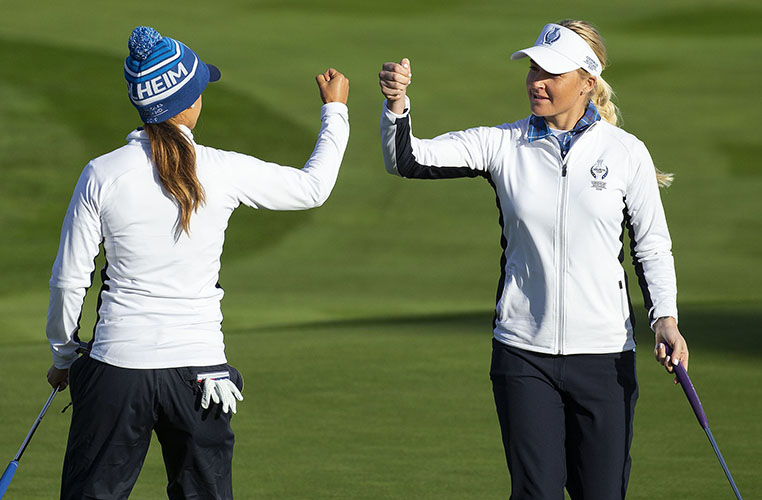 Europe edged into a slender lead after the opening morning of the 16th Solheim Cup over the PGA Centenary course at Gleneagles.

They took advantage of the bright but blustery conditions to win the first foursomes series 2 ½ – 1 ½ and to claim an early advantage in their bid to win the trophy for the first time since their 18-10 success in Colorado back in 2013.

The foursomes result mirrored the scoreline after the first series at the last match at Des Moines Golf and Country Club two years ago when America bounced back to win 16 ½ to 11 ½.

The first point of the day went to America when Jessica and Nelly Korda beat Caroline Masson and Jodi Ewart Shadoff 6 & 4. 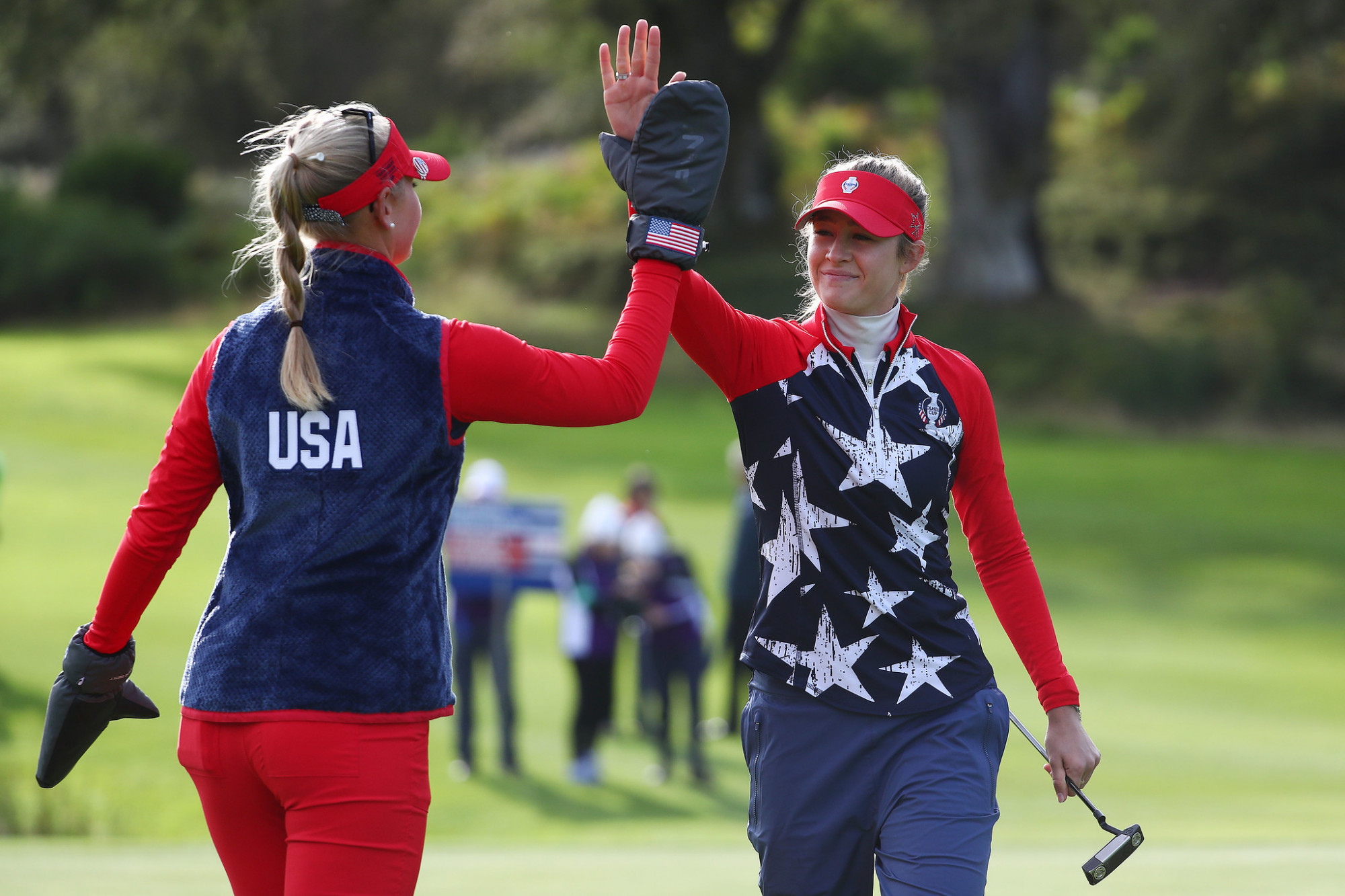 The Americans were making history by becoming the first two sisters to play together in a Solheim Cup match and they celebrated that milestone with a comfortable win against the German and the Englishwoman. The Korda sisters won the first two holes with birdies and were six up through the 11th before sealing the point when Ewart Shadoff missed from ten-feet for a birdie on the 14th hole.

“It was a lot of fun,” said Nelly. “I think the whole group had a lot of fun. Our caddies are good friends too so it was really light out there.”

The first match on the course between Europe’s Carlota Ciganda and Bronte Law and America’s Morgan Pressel and Marina Alex proved to be a seesaw affair with both pairs claiming the lead at one time or another before the Europeans won the 17th with a birdie to draw level. That was how it remained after both pairs carded pars on the final hole. 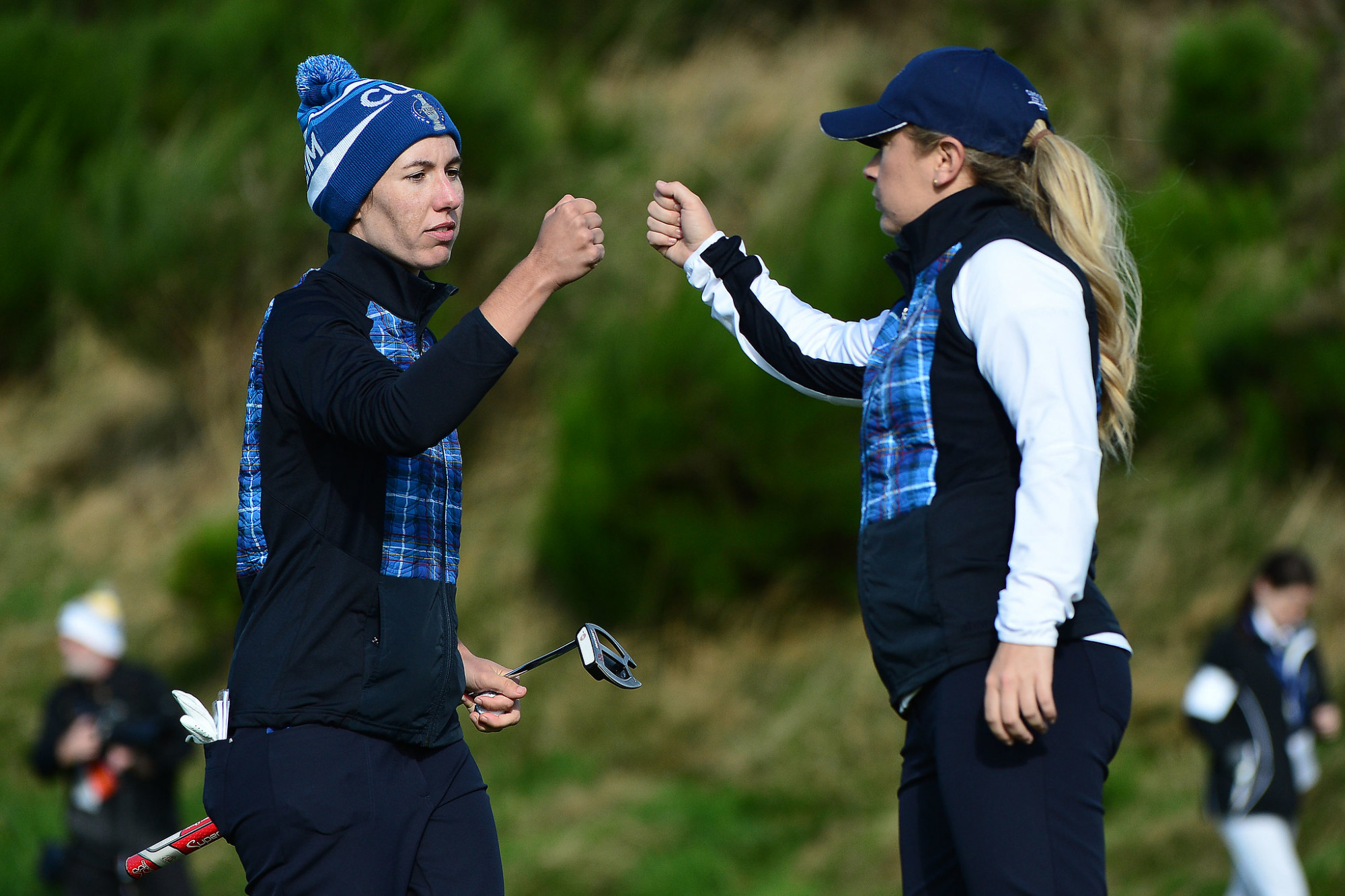 Americans Lexi Thompson and rookie Brittany Altomare took the lead with a birdie on the third hole of their match against Georgia Hall and Celine Boutier but the former Women’s British Open champion and her French partner drew level with a birdie of their own on the fourth before also winning four of the next eight holes. The Americans battled back with birdies at both the 14th and the 16th but Boutier secured Europe’s first full point of the morning with a par putt one hole later. 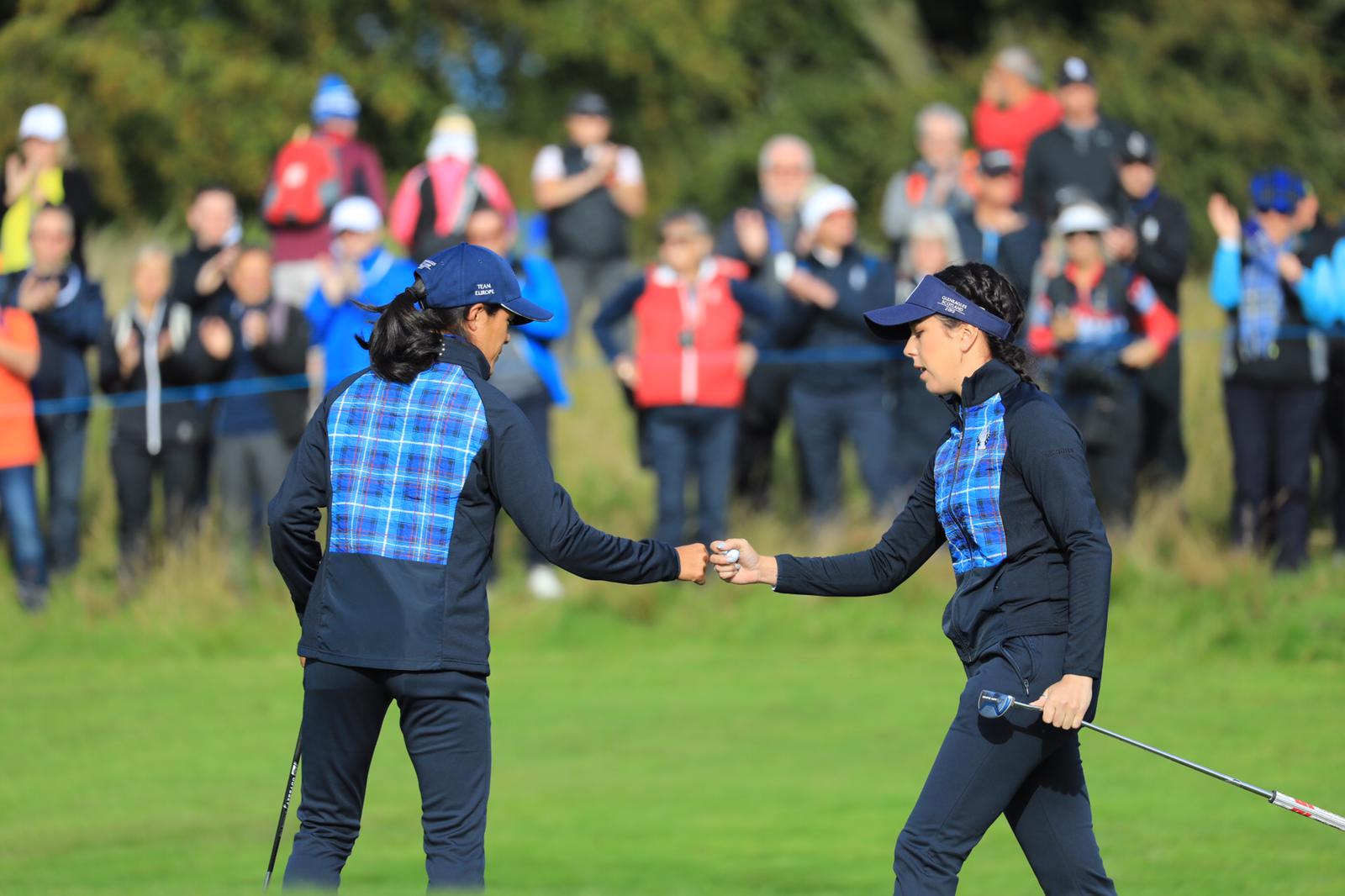 The last match on the course pitted England’s Charley Hull and Spain’s Azahara Munoz against Megan Khang and Annie Park and it proved to be a tense tussle in which the Europeans were two up after five holes but were pegged back to level when the Americans won the sixth with a par and the eighth with a birdie. The next four holes were halved before the home team edged ahead again with a birdie on the 13th before claiming a 2 & 1 win when the Americans failed to match par on the short 17th hole.

European captain Catriona Matthew played two of her rookies, Bronte Law and Celine Boutier, in the morning foursomes and she elected to bring the third, Anne Van Dam, into the action in the first Friday Fourball match of the afternoon alongside veteran Norwegian Suzann Pettersen. They were drawn against Danielle Kang and Lizette Salas. 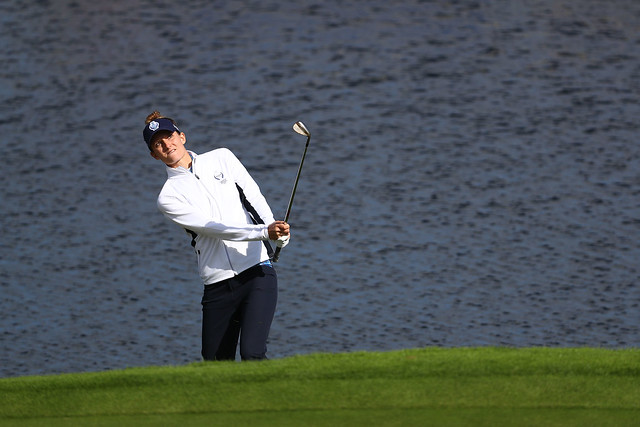 Given their success in tandem in the morning it was something of a surprise that US captain Juli Inkster elected to split the two Korda sisters for the fourball series. Jessica was paired with Thompson in the third match against Ciganda and Law while Nelly was put together with Altomare for the final match on the course against Hull and Munoz.

In the other match on the course, Swedes Anna Nordqvist and Caroline Hedwall were paired in the second match against Ally McDonald and Angel Yin. That means that all 12 players on both teams were used on the opening day.