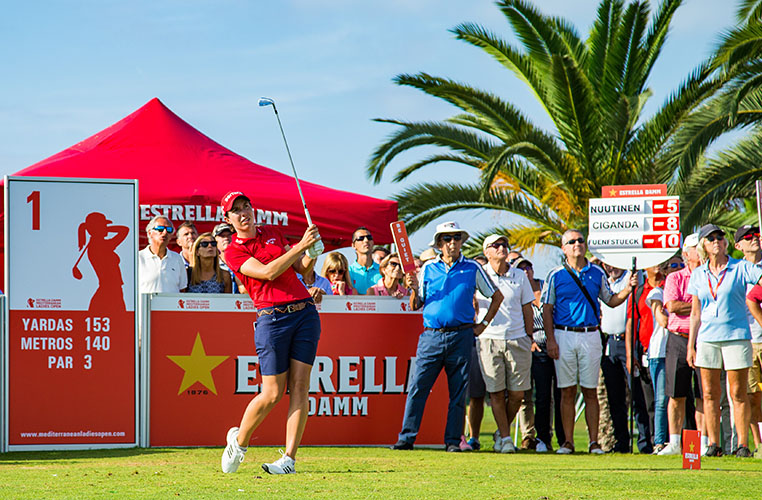 There hasn’t been a dull moment in the final round of the Estrella Damm Mediterranean Ladies Open, which teed off in glorious, warm and sunny conditions at Terramar Golf Club in Sitges this morning.

Germany’s Laura Fuenfstueck, looking for her first victory on the LET, started with a two stroke lead, but that had evaporated in less than 15 minutes after the par-3 first hole has been completed.

Having flown her tee shot over the green and lost a ball, she started with a double bogey and another double on the par-4 second handed Spanish Solheim Cup player Carlota Ciganda a two-stroke advantage.

However, there was yet more drama as Fuenfstueck birdied the third and then Ciganda dropped a shot on the par-3 fourth to draw level again on seven-under, but Fuenfstueck bogeyed the fifth to give Ciganda a one-stroke lead.

Ciganda then took three shots to reach the sixth green and rolled in a 12 foot putt for birdie to move to eight-under-par. Fuenfstueck’s birdie putt from around 10 feet then shaved the edge of the hole and Ciganda regained a two stroke lead.

Both players then birdied the par-5 seventh to move to nine and seven-under-par respectively.

Finland’s Sanna Nuutinen is playing in the same group and she has so far had a steady round, with just one birdie on the third hole and is just one behind.

The other challengers include Ursula Wikstrom and Christine Wolf, who are three strokes further back, but could enter the fray on the back nine.