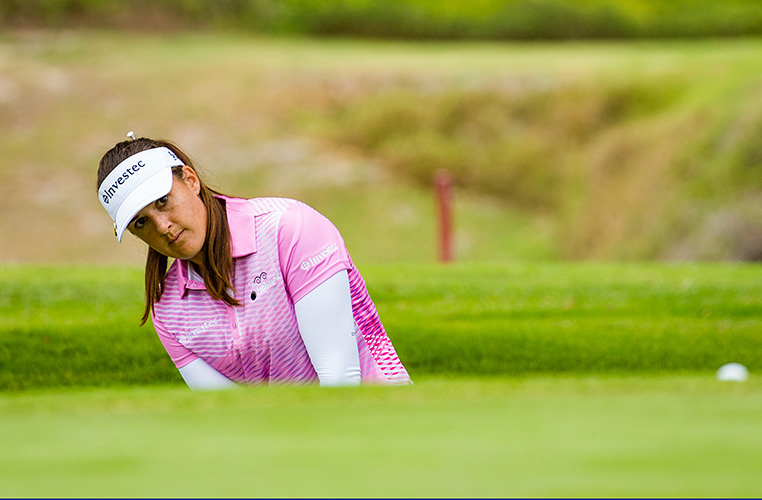 Home heroine Nicole Garcia joined a four-way share of the lead on the opening day of the Investec South African Women’s Open, in her first competitive round on the LET since 2018.

Garcia fired a three-under-par 69 to sit alongside Olivia Cowan, Lucrezia Colombotto Rosso and Emma Nilsson after a becalmed day at Westlake Golf Club in Cape Town.

Garcia, who missed the 2019 season due to hip surgery, had four birdies with just a solitary bogey.

“We were pretty lucky with the weather, because it wasn’t too windy. I’m really pleased with today and of course I’m happy,” said the winner of the Canon Serengeti Par 3 Challenge on the Sunshine Ladies Tour.

“It was my first LET event in a year-and-a-half and I was nervous. I wasn’t as nervous in the Sunshine Ladies Tour events, because it was more comfortable for me. I got to one of the par fives and I was putting for birdie and I started shaking, because I felt like I was in a British Open, but I made the putt and I was fine for the rest of the round, so I think it was just comeback nerves.

“I have been hitting the ball well and I have had a few rounds under par, so it wasn’t completely unexpected. I knew that if I got my driver going, I could shoot a good round.”

Olivia Cowan, of Germany, had a bogey-free 69 after making birdies on the eighth, ninth and 15th holes. She said: “It was really nice to play out there today and I have witnessed this course being really windy. It was quite calm, which made it a lot easier. The course is in great condition and I played well.”

Monaco-based Italian Colombotto Rosso and Sweden’s Nilsson returned three-under-par rounds in the afternoon, in warmer temperatures after the sunshine broke through the clouds.

Colombotto Rosso mixed six birdies with three bogeys, whilst Nilsson, a four-time winner on the LET Access Series, where she won the Order of Merit in 2018, had a steady round with four birdies and one bogey. She said: “I just wanted to make as many birdies as possible to have a good round and I managed four, which was great. I really like this tournament, as we get to see the sites of Cape Town, such as the penguins and Cape Point, so it’s one of my favourites and I love it here.”

MacDonald, who was three-under but bogeyed the last, said: “I had the same local caddie as last year and he’s really good at reading the putts so it was a chilled round. I didn’t need to do too much on the greens. I’m really pleased with my performance as I gave myself a lot of chances. The last wasn’t great, but I’m happy to be under par for the first round, especially after a late tee time. We were lucky because the practise rounds were so windy that it was almost eerie to play the course flat calm. I’m looking forward to tomorrow.”