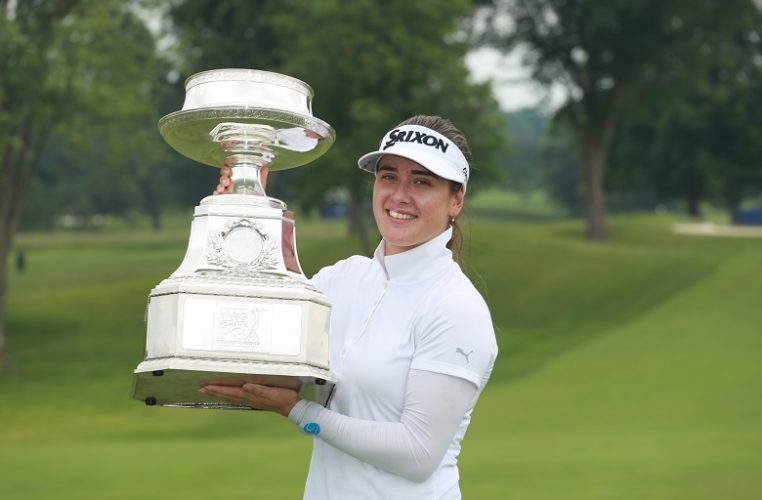 Hannah Green sunk a clutch 5-foot par putt on the 72nd hole to stave off defending champion Sung Hyun Park and win the 2019 KPMG Women’s PGA Championship on Sunday at Hazeltine National Golf Club in Chaska, Minnesota. After entering the final round with a one-shot advantage, Green expanded her lead with front-side birdies on Nos. 2 and 7. However, consecutive bogeys from Green on 11 and 12 halved her lead to two, then Sung Hyun Park birdied the par-5 15th to close within a stroke.

Green answered with a birdie of her own at 16, side-dooring a 20-foot putt, to reestablish a two-shot buffer. Park’s then made a miraculous birdie at No. 18 to force Green to par Hazeltine’s uphill 18th. She did just that, getting up and down out of a greenside bunker to seize her initial LPGA victory and first major championship.

With her victory at Hazeltine, Hannah Green became the third Australian to have her name etched into the KPMG Women’s PGA Championship Trophy. Karrie Webb (2001) and Jan Stephenson (1982) blazed the trail that Green followed Sunday at Hazeltine. These three players are also the only Australians to win an LPGA major championship, with Webb winning seven times and Stephenson three.

Hannah Green became only the third player to win the KPMG Women’s PGA Championship wire-to-wire (no ties), joining Yani Tseng (2011) and Se Ri Pak (1998). Green’s lead after every round this week at Hazeltine: Thursday (one shot), Friday (three shots), Saturday (one shot), Sunday (one shot).

DÉJÀ VU ALL OVER AGAIN

For the second time in three years, the KPMG Women’s PGA Championship defending champion put up a valiant fight, only to finish runner-up by one stroke. Sung Hyun Park closed with a 4-under 68 on Sunday, her best effort of the Championship, to finish one shot back of Hannah Green. Two years ago, at Kemper Lakes, 2016 Champion Brooke Henderson made a serious bid for back-to-back Championships but finished a shot back of Danielle Kang.

Mel Reid nearly completed the largest come-from-behind victory in KPMG Women’s PGA Championship history. Trailing 54-hole leader Hannah Green by nine strokes heading into Sunday’s final round, Reid posted her best round of the year, a six-under 66. The record (seven strokes) was set in 1983 by Patty Sheehan, who posted a final-round 66 to edge Sandra Haynie and capture the first of her five career major championships.

Reid finished in a tie for third, which surpassed her previous best finish of T-9 in the 2015 AIG Women’s British Open. Prior to this week, her best finish in the KPMG Women’s PGA Championship occurred last year at Kemper Lakes (T-60).