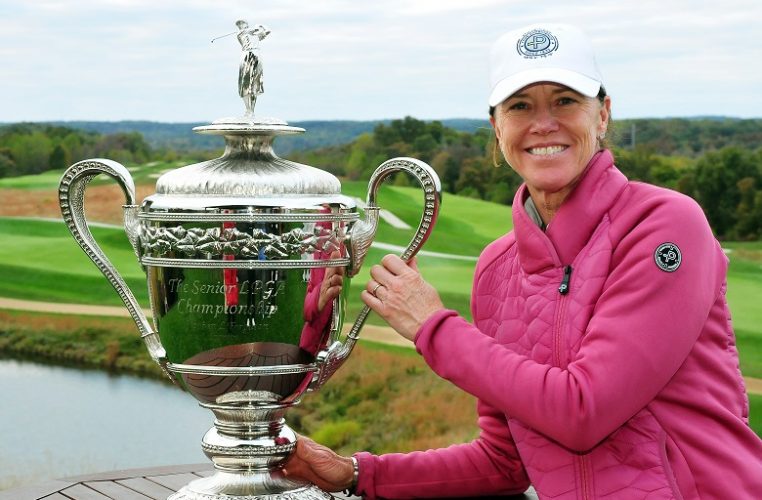 The winds and weather were brutal on the final day of the Senior LPGA Championship presented by Old National Bank on Wednesday. With temperatures dropping and gusts increasing, only Helen Alfredsson finished the tournament under par at -2 and claimed the 2019 title in French Lick. Alfredsson, a seven-time LPGA Tour winner and major champion, claimed her second senior major of the season after winning the 2019 U.S. Senior Women’s Open this past May.

Alfredsson birded three times on the opening nine holes, as second-round leader Juli Inkster bogeyed twice through nine and dropped from the top spot two groups behind. With just one bogey on No. 11, Alfredsson recorded a string of pars to ride out the lead until the final putt dropped on Wednesday evening.

“As all the sports psychologists say, take one shot at a time. That’s even more crucial on a day like today, and really stay out of the trouble areas which you can find here quite easy and that’s what I was trying to do all day. It wasn’t always pretty but hopefully it was quite efficient,” said Alfredsson.

Alfredsson finished T2 in 2017 and T3 in 2018, and felt a win was close on the Pete Dye course. “It was a great feeling to win the U.S. Senior Women’s Open and to get a USGA trophy because it eluded me for some time,” said Alfredsson. “I’ve always wanted to do it in the end, be strong, to be headstrong, and that’s what I’m more pleased with. When the fire gets in your belly, I meant, it goes up [in my head] anyways, playing and all this other stuff. So, I’m more pleased with that I’m able to keep it together.”

LPGA and World Golf Hall of Fame member Inkster struggled on the back nine, with three more bogeys and only one birdie to finish in solo second at +1 after shooting a 76. It was her third second-place finish in a senior major, but she knows there is more to look forward to. “My practice swings felt good and then I get over it and it’s like my lower body was just stopping,” said Inkster. “You know what, the sun’s going to come up tomorrow.”

Trish Johnson, who watched Alfredsson accept the same Senior LPGA Championship trophy she won in 2017, finished in a tie for third with Moira Dunn-Bohls. Michele Redman rounded out the top five after shooting a 72 to put her at +3.

Only one other player recorded an under-par round on the final day. Michele McGann teed off first on Wednesday and shot a 69 to move from T43 to T19 at +11.

After hoisting the trophy, Alfredsson announced she would be sponsoring a red wagon at the Riley Children’s Hospital. “What we do with the Riley kids, you feel like you’re leaving this place, and you met all these amazing kids, and hopefully we do something good,” said Alfredsson. “We enjoy this, but more important if we are able to give back.