Hillier out in front 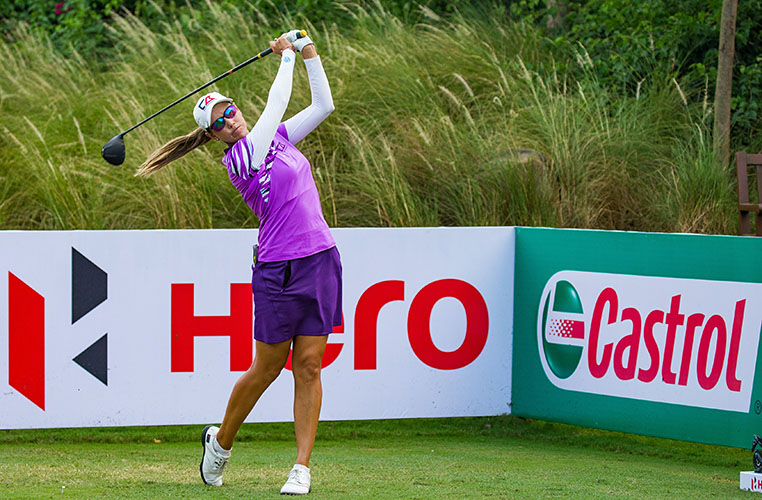 Australian Whitney Hillier carded a one-under round of 71 to claim a one-shot lead at the halfway stage of the Hero Women’s Indian Open.

Hillier made global headlines last week with her hole-in-one during the second round of the Estrella Damm Mediterranean Ladies Open, where she went on to finish seventh. Her fine form has continued at the DLF Golf and Country Club in Gurugram, where she holds a 36-hole total of six-under-par 138 ahead of Norwegian Marianne Skarpnord.

Hillier began the round tied for the lead with Meghan MacLaren, but the Englishwoman carded a 73 to slip back into joint third alongside Swede Linda Wessberg.

England’s Charlotte Thompson fired the low round of the day with a 67 and joined Lydia Hall and Christine Wolf on three-under.

Amandeep Drall is leading the home challenge and she joined England’s Liz Young and new Zealand’s Hanee Song a shot further back in a share of eighth place.

Starting with a later tee time of 11.25am on Friday, Hillier made her first birdie at the sixth hole, but dropped a shot at the seventh and made the turn in level par. She double bogeyed the 10th but then rallied with back-to-back birdies on the 12th and 13th holes. Although she made another bogey on the 14th, she made a brilliant pair of birdies on the closing two holes, rolling in putts from five and two feet on the challenging 17th and 18th respectively.

“It was a little bit up and down in the middle there but I got it back really well, so I’m quite proud of that,” said the 28-year-old from Perth, who loves playing in the heat in India.

“I was two-over after 10 and then I got it back to finish one-under for the day. I hit it close on 17 and 18, where I used the slope quite well.

“It’s funny, I’m from Joondalup Golf Club, which is actually quite similar, shots wise. I just realised that this course has the ‘Lake’ and ‘Quarry’ nines, which is exactly the same as at Joondalup. I’m not kidding, it’s so surreal.”

Meanwhile Skarpnord, who teed off at 7.05am, described her round as a mixed bag. The 29-year-old from Sarpsborg said: “I had an early tee time today and I was pretty sure I was awake, but obviously I was not. I had a little seven there on the 11th hole, which was not a great start to the round, but I did my best to just forget about it. I said to myself, ‘Just forget about what just happened because if you’re going to think about that for the next 16 holes you might as well go home’. I felt that I did that well, and, at times I played great golf today. At other times, it was not that good, but overall, after that start, I’m happy with one-under today.”

MacLaren, who also played in the afternoon, said: “It was a bit of a grind out there. I think I clung on pretty well and I’m still up there. It was probably a bit tougher as there was more breeze out there and playing in the afternoon it’s a bit stickier, but it was still fairly similar to yesterday.”

The shot of the day belonged to Kelsey MacDonald, who used her 7-iron to make a hole-in-one at the par-3 16th.

Following round two, 68 players made the cut at +7 and the third round commences on Saturday at 6.45am local time. 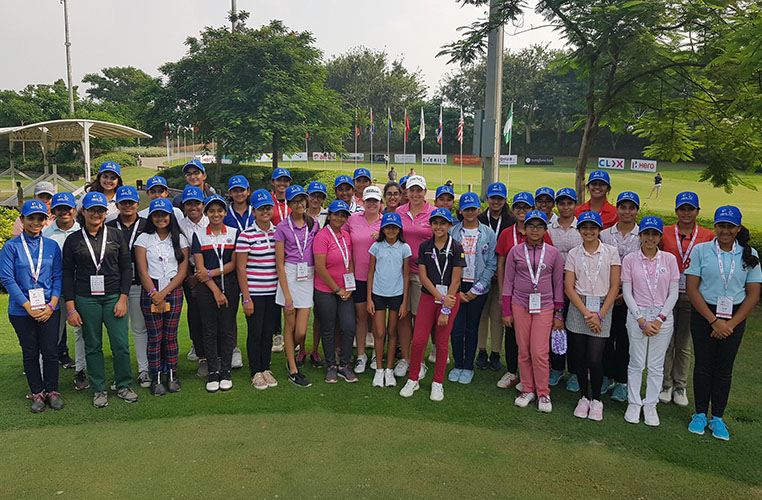 Over 40 girls from across India gathered together for the third annual Achievers Camp, a joint initiative between the LET and the WGAI which is organised with help from K&A Golf and the DLF Golf and Country Club. The camp also receives support from The R&A. On Friday, Saturday and Sunday, the girls will take part in a number of education sessions, clinics and behind-the-scenes tours as well as having the opportunity to watch and meet some of the LET players. Welcoming the girls to the camp were Liz Young and Ellie Givens, while the victorious Solheim Cup captain Catriona Matthew also gave them a golf clinic.