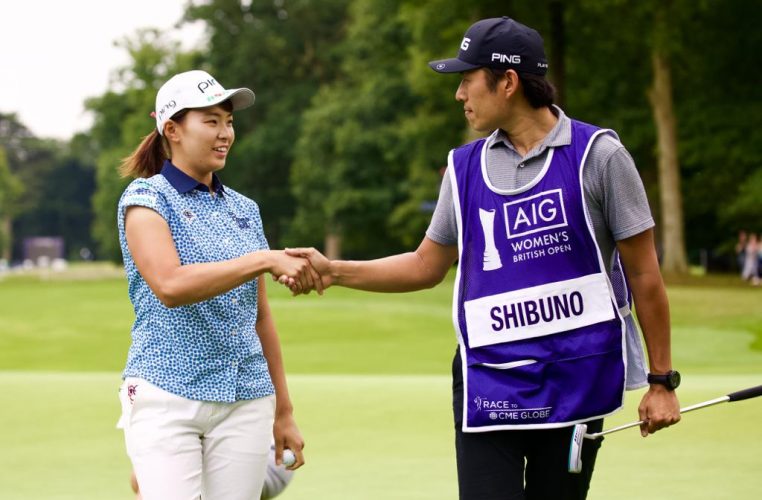 Hinako Shibuno produced a late charge to lead after the third round of the AIG Women’s British Open at Woburn.

The 20-year-old from Okayama city picked up four shots in her last five holes to storm home in 30, posting a 67 to lead by two on 14-under-par.

Ashleigh Buhai led by three overnight and was five clear of Carlota Ciganda after 10 holes, but she dropped three shots at the 12th, 13th and 16th for a third round 72.

Sung Hyun Park lies in third, with Morgan Pressel, world No.1 Jin-Young Ko and Lizette Salas in a share of fourth.

Ciganda is tied for seventh on nine-under-par with England’s Bronte Law and Charley Hull, who are all five shots adrift.

Defending champion Georgia Hall slipped back to four-under and 10 shots back after a third round 74.

Ciganda looked set to challenge but double bogeyed the narrow tree-lined 18th hole on the Marquess course, after hitting her tee shot right into a rhododendron bush, from where she tried to advance the ball and then took an unplayable drop, slipping back to nine-under. 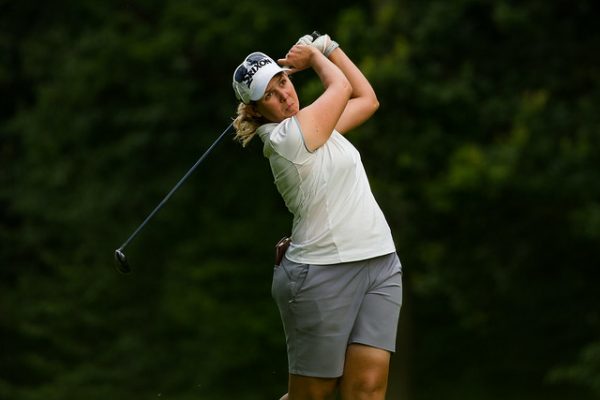 Buhai (above) made a strong start with two birdies on the front nine and birdied hole 10 to get to three-under, but admitted that she was rattled by a three-putt bogey on the 12th and ran out of steam. She said afterwards: “I made a great sand save on 14 and then a bogey on 16, but I hit some good shots on 17 and 18, which steadied me out. I think it helps being two behind because there’s not as much pressure.”

Shibuno, who is playing outside Japan for the first time, went out in one-over but carded six birdies on the back nine.

In a press conference after her round, she said, though translation: “I was pretty upset after the three-putt bogey on the ninth, but after the second shot on the 10th hole, I was able to bring myself back.

“It’s definitely exceeding my expectations. I came here wanting to make the cut, so right now I feel like I’m doing something incredible.”

Shibuno is a rookie on the JLPGA Tour, and in May, won the Salonpas Cup, a major on the JLPGA Tour. She added a second victory in July at the Shiseido Anessa Ladies Open. Last year, she played on the developmental Step Up Tour.

Shibuno has a nickname of “Smiling Cinderella” back in Japan, and has a unique golf swing utilising her double-jointed arms. Her manager, Hirsohi Shigematsu, (below), tries to keep her smiling and relaxed on the course by wearing colourful outfits in the gallery, which will remind her of Japan. He has four outfits and wore a Mount Fuji head dress on Friday, followed by a man’s black kimono, combined with blue curly wig and samurai sword and soft toy on Saturday.

“A little embarrassing,” Shibuno said, with a wide smile. 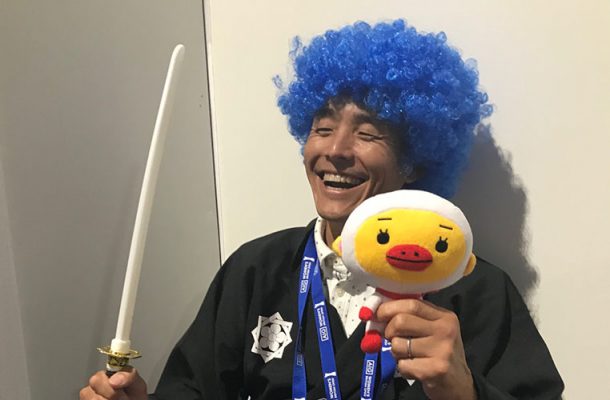 Home hopes lie with Bronte Law – who is the only player in the field to be bogey free after 54 holes – and Charley Hull, who reignited her title bid with a stunning run of four birdies in five holes after the turn.

“I didn’t really feel like I played that badly on the front nine,” Hull said after shooting a 2-under 70 in the third round. “Probably hit one bad shot on the par 3, the eighth, where I fatted my tee shot, but apart from that I feel like I played pretty well. On the second hole (the par-five 2nd), I hit a good drive and not a bad second shot but had a 5-iron in, plugged into the bank and didn’t manage to get up and down.”

A member at Woburn since age 11 who has been playing in front of several of her friends and family this week, Hull plans to enjoy herself as much as possible in the final round. “Just going to go out there and have fun. Treat it like another day at the office and pretend I’m out there with my friends playing golf. I’m hitting it well. I’m putting well and I’ve just got to be confident tomorrow.”

Law said that it was a relief to still be bogey-free after leaving several putts in the jaws. “I think the fact that I haven’t had any dropped shots is going to help me, if I can continue that tomorrow and start to hole some putts, then I think that I can really rely on the fact that I’m playing solid golf and hopefully I can get a low one tomorrow.”