Living in the Future: The Anika Varma Story 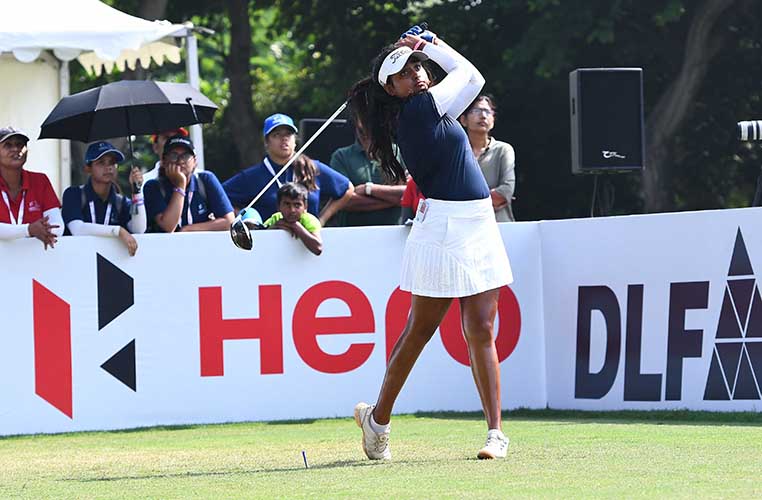 By Amit Pandey and Aman Misra in New Delhi

These days, most 15-year-olds are busy attending class, thinking of their future.
It is a fleeting age, one that rushes by at the speed of light. That is not the case with Indian golfer Anika Varma, who seems to be living in her own version of the future.

Scores of 76, 72, 67, and 70 at the DLF Golf and Country Club in Gurgaon, India, ensured that she finished ahead of the other 21 Indians in the field.

It nearly eclipsed the highest finish by an amateur at the tournament, a record held by Meghna Bal at 19, when she finished T4 in 2007, making Anika (15) the youngest Indian to achieve this feat.

Varma’s finish comes at a time when Indian Women’s golf is trending in the right direction – her contemporary Diksha Dagar won for the first time on the LET in March, adding to Aditi Ashok’s three LET wins.

Earlier in 2019, the Varmas spoke with multiple time European and Asian Tour winner Gaganjeet Bhullar. Anika had been very clear, according to her father, businessman Sonel about her aspirations to play professional golf going forward.

Bhullar suggested that they go see his coach Noah Montgomery, who is based out of Ridge Golf Course in Auburn, California.

A chance meeting led to Anika moving base, enrolling in high school at Granite Bay and working on her game on the weekends. It helps that her elder sister is enrolled at Medical School at nearby UC Davis.

She adjusted to life in the States with the help of mum Sonal, even attending her first dance with Noah’s daughter Hannah, a frequent practice partner. Meanwhile, her game flourished.

When you ask Montgomery about his relationship with the young Indian, he doesn’t skip a beat. “She has learned to take ownership of her game, that I think is the way to sum up our relationship so far.” says the 49-year-old policeman turned coach.

At 15, your golf game changes like your socks. Montgomery who has coached golf for over a decade ponders the possibility – can she repeat this impressive performance? It is a frightening, as well as exciting prospect.

Working with an impressive stable of players that include Paige Lee, John Catlin, and Bhullar amongst others – he is the type of coach who would give you the shirt off his back if it helps with your golf game.

Indeed, during Open week Anika played with his wedges. Her father Sonel chimes in: “Before we can even react to something, Noah has the solution.”

What makes Anika’s situation unique is two-fold. First, not many Indian golfers make the shift during high school. The second and more impressive factor is her ability to peak during a key week – difficult at any level of the sport let alone the upper echelons.

Playing alongside LET regulars Manon De Roey and Emma Nilsson on the weekend, she was neither nervous, nor worried about the outcome. These are moments golfers prepare for their entire lives. So much more when you play your national open.

It remains to be seen where she will go from here. Whether she turns professional or decides to play college golf is a question only time can answer.

Noah contends that along with playing top ranked amateur tournaments, she should continue testing her game on various professional tours, given the opportunity.

Shortly after lifting the low amateur trophy, Anika was back on a flight to California. Classes beckoned, and of course, it was back to the grind with Noah. Rest assured, she isn’t forgetting about Open week anytime soon.